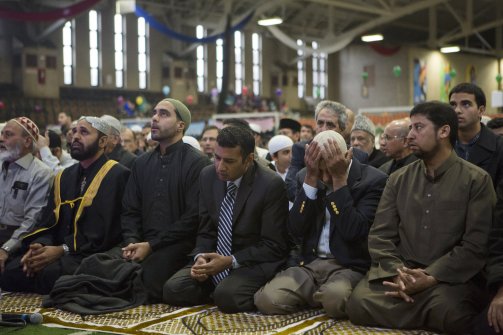 “What these statements ignore is the existence of an interpretation of Islam—strains of ideologies with names like Wahhabi, Salafi, and Deobandi—that do sanction violent jihad, much of it borne in Saudi Arabia and exported to the world, from Chechnya to Cambridge.” http://www.thedailybeast.com/articles/2013/04/23/how-american-muslims-can-respond-to-boston.html

“He looks like me,” my son, Shibli, 10, said as we looked at a photo of a young Dzhokhar Tsarnaev flash upon the TV screen Friday night. Indeed, with his innocent eyes and rumple of dark curly hair, he did. As an American, a Muslim, a mother, and an aunt to a nephew on the cusp of manhood, my heart just broke for yet another boy lost in our Muslim community, taking with him the lives of others.

Enough, enough, enough, I say, with the CYA—Cover Your A**—strategy in our Muslim communities. I would like our community to take responsibility for how it is that we—yes, we—have allowed an interpretation of Islam to prevail in this world that turns this boy of innocence into a bomber and murderer. We need to work with compassion and love to guide these boys to a “straight path,” as mentioned in the Quran’s first chapter, Al-Fatiha, “the Opening.” And that straight path should be one of nonviolence.

There is much debate about the “T-word,” or “terrorism,” and whether President Obama took too long to say it in the case of the Boston bombing. In the same way, we—Muslims, journalists, and policymakers—have to dare to say the “I-word”—Islam—because there is no denying that an interpretation of Islam is sanctioning some Muslims to commit terrorism. I believe that until Muslims directly challenge it, we will never really isolate this interpretation of Islam, and the world will judge all Muslims.

Instead we engage in a PR strategy. The Tsarnaevs’ religion “cannot be an issue in this whole story,” says a local leader in one American Muslim community. “This is not jihad,” a Muslim activist in Chicago announces at a press conference organized by the Council on American Islamic Relations. There is the constant use of the Quranic injunction: “To kill one innocent person is like killing a civilization.What these statements ignore is the existence of an interpretation of Islam—strains of ideologies with names like Wahhabi, Salafi, and Deobandi—that do sanction violent jihad, much of it borne in Saudi Arabia and exported to the world, from Chechnya to Cambridge.

To address this issue, we have to overcome our collective tendency to engage in denials, demonization, and deflection when the “I-word” emerges in conversations about these kinds of violent incidents. I think of this as “the 3D defense” that too many Muslims engage in. I posted some of these thoughts on my Facebook page Friday night and, while there were many Muslim supporters, some Muslims assailed me with their 3D defense: bringing up everything from Hollywood’s portrayal of Muslims to Iraq, Afghanistan, and the issue of Islamophobia.