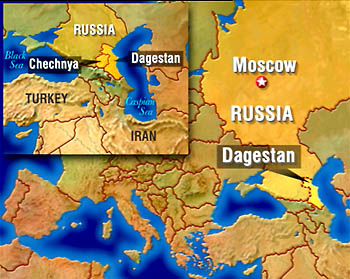 Vilayat Dagestan, a jihadist group that is part of the Caucasus Emirate, an al Qaeda-linked group operating in the North Caucasus, has issued a statement on the Boston Marathon bombings.

The group released the statement on its main website earlier today, citing “speculation” in the press that one of the bombers “could be affiliated with the mujahideen of the Caucasus Emirate, in particular, the mujahideen of Dagestan.” The statement has been translated by the SITE Intelligence Group.

The organization’s statement references Tamerlan Tsarnaev, one of two brothers responsible for the bombings, who reportedly traveled to Dagestan and Chechnya last year.

Vilayat Dagestan does not deny any connection to Tsarnaev, nor does it say that he was known to them prior to the bombings. Instead, the group says that it is “at war with Russia” and “not fighting against the United States of America.”

Moreover, Vilayat Dagestan says that if the US government is “really interested in discovering the true organizers of the explosions in Boston, without being complicit in a Russian show, they should focus on the involvement of the Russian special services in the event.”

US intelligence officials contacted by The Long War Journal say that a number of jihadist groups based in the Caucasus and Chechnya are being investigated. However, the investigation is still in its earliest stages and it is not yet known whether any of them played a role, directly or indirectly, in the Boston bombings.

It is far too early to draw any firm conclusions one way or the other, these officials say.

Subsequent reports indicate that Tsarnaev traveled to Dagestan and Chechnya during those months and it is this trip that has drawn suspicion.

In August 2012, one month after returning to the United States, Tsarnaev posted a page on YouTube. Videos disseminated by Vilayat Dagestan were among the jihadist propaganda and messages posted by Tsarnaev.

By itself, of course, this does not mean that Tsarnaev became associated with the group during his 2012 trip to Dagestan. US intelligence and counterterrorism officials are currently attempting to build a dossier of Tsarnaev’s overseas connections, including any possible ties to Vilayat Dagestan, according to authorities contacted by The Long War Journal.

Vilayat Dagestan’s attempt to blame the “Russian special services” for the Boston bombings is inconsistent with the available evidence on Tamerlan Tsarnaev’s sympathies and ideology.

In early 2011, the Russian government warned the FBI about Tsarnaev’s suspected ties to Chechen terrorists. The FBI issued a statement concerning this warning late last week.

The FBI said it was informed by a “foreign government” that Tsarnaev “was a follower of radical Islam and a strong believer, and that he had changed drastically since 2010 as he prepared to leave the United States for travel to the country’s region to join unspecified underground groups.” This government requested additional information from the FBI on Tsarnaev.

The FBI added that its review of the available evidence at the time “did not find any terrorism activity, domestic or foreign, and those results were provided to the foreign government in the summer of 2011.” The statement concludes: “The FBI requested but did not receive more specific or additional information from the foreign government.”

The Washington Post and other press outlets have reported that the warning “came from the Russian government,” which was “concerned about Tsarnaev’s potential ties to Chechen terrorists.”

It is not known if the Russian government had any specific information tying Tsarnaev to terrorists.

The evidence that has come to light since the Boston bombings shows that Tsarnaev was at least sympathetic to the jihadists’ anti-Russian cause. It is not known if there was more to the sympathies.

In its statement on the Boston bombings, Vilayat Dagestan says that “by the order Doku Umarov, the Emir of the Caucasus, it is prohibited to carry out strikes on civilian targets.” But terrorists acting under Umarov’s orders have struck civilian targets repeatedly in the past.

The United Nations reports, for instance, that Umarov was one of the “main organizers” of the deadly Beslan school siege in early September 2004 and the attacks on Moscow metro stations in March 2010.

At this point, the inquiry into Tamerlan Tsarnaev’s background and activities is wide open. The possibility that he made contact with any one of several groups remains under investigation. It is also possible that he had no substantive ties to these jihadist organizations.