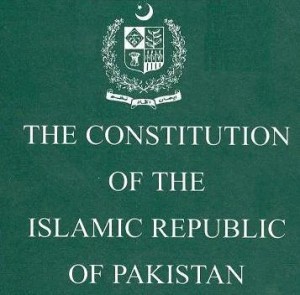 One of the funniest question asked on Facebook the other day, not by a common man living somewhere in remote village of Dera Ghazi Khan, but by a very informed blogger, social activist and highly educated person living in United states. is , “Does anyone know if Pakistani constitution allows military to take over as necessary? “ … Though it is funny, but indeed it requires a serious pondering because like the questioner majority of well-educated middle-aged Pakistanis who grew up in the era of General Zia has very scary answer to this, the answer they think is “yes, Pakistan constitution allows military take over as necessary”.

Of course Pakistan constitution or for that matter any constitution (having even a grain of democratic principles in it) will not allow military to take over  in ANY case, even if the heavens fall. But we need to identify the reason for such a question. The reason has its root back in 80′s when people like me were growing up, and probably even now, a lot of Pakistanis would be fed with a very simple question, the question is/was :

“If there is a “constitutional breakdown” (btw nobody will seem to answer what they mean by “constitutional breakdown” (a meaningless term), but will say like what happened in 1977/1999 etc… and “country is at the brink of collapse” (another absurd expression), and “no institution is performing its duties” (and simply preposterous allegation) , what is MILITARY supposed to do?”

This question will be repeated again and again by the “intellectuals” , “philanthropists” , “academics”  and now “anchors” on mass media and then the answer will be provided  first by a supreme court judgment  (Asima Jilani case, Zafar Ali Shah case), and then will be given weight-age by quoting certain article of constitution. And that’s how majority people who grew up in those days will have the answer “YES” to this very funny question that“Pakistan Constitution allows military take over as and when necessary”.

Truth is Pakistan constitution has NEVER allowed the military take over, as a matter of fact keeping in view the military take over by Ayub and Yahya , 1973 Parliament put a special article yes the well-known article 6 in the constitution which made any military take over as an act of treason. However the modus operandi used by the successive dictators (Zia & Musharraf) is that after the take over they first get their act of treason validated by the supreme court and then after getting a new assembly in place they ask the assembly to do a constitutional amendment (notorious 8th and 17th amendment) that validates in retrospective “ONLY” their act of take over. It is important to note that both of these amendments validated only the acts of 4th of July and 12th of October, and NEVER allowed the future acts of military take over.

Wait there is an 18th Amendment Now:

Yesterday however I came across a very good point about the 18th amendment, so let me elaborate it in detail:
So basically after the 12th October 1999 coup by the 21st century mad dictator Pervez Musharraf, first thing he got done was to get his coup “validated” by the Supreme Court of Pakistan and then in 2003 , the mad dictator forced the Parliament of 2003 to pass the 17th amendment, which inserted the following article in the constitution.

According to this amendment the actions of 12th of October 1999 and any subsequent acts made by him were validated in retrospective.

As I said it is same technique that General Zia employed in 1985 via 8th amendment.

But Lo and Behold!.. there is something more in 2010, the new parliament passed the 18the amendment, which erased the old article 270-AA and inserted the following:

This is very important point, so as it stands today the constitution of Pakistan has declared all the acts of 1999 and afterwards made by the mad dictator as “Without Lawful Authority” and having “No Legal Affect“. So that means that article 6 will and should be applied on the 12th of October coup. And let me remind that article 6 includes that “all the people aiding, abetting or collaborating” are as much guilty as Musharraf.