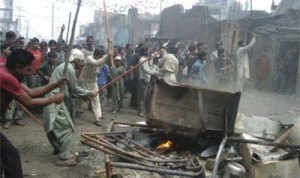 Only in the last few hours, ten innocent passengers were blown up in Peshawar and a father and a son were gunned down in Karachi for the mere crime of being Shias. And this is our routine life as we thank that no big untoward incident has happened. As someone who has travelled the length, breadth, and heights of Pakistan, I could never have enough of Pakistan’s splendour and beauty. When I was growing up as a child after the mayhem of 1971, I never imagined the gory events that occurred in the former East Pakistan were possible ever again. After that ghastly episode, many of us were convinced that the possibility of Pakistani murdering Pakistani again in the manner it was perpetrated in 1971 was remote or even impossible. Some of us were mistaken in believing that Pakistan had crossed the great divides of the past. And now all this violence? Most of it in the name of God. What type of God is He?

Could it be economic hopelessness and desperation? Whatever, nothing can excuse the hatred, barbarity, and bigotry that motivates the irrationality and cruelty of most public reactions on show in Pakistan. Ignorance is not a shield anymore. The ubiquity of cell phones and social medias ensure that we see our evils in real time. Although tribal justice isn’t new to me and neither am I oblivious of the revenge killings in all nooks and crannies of old Pakistan, my country has now achieved a new grade in barbarism. I am shocked when a few Pakistanis, after watching the videos and seeing the pictures of some of the barbaric acts maintain that the victims got what they deserved. Have we lost sanity? Or can it be compared to the people who actually stand aside and watch while such acts take place. Could this be illiteracy, hatred or wickedness? How could people stand and watch while someone is being smashed or burnt to death? As I watched the video of two young brothers lynched in Sialkot after being mistaken for robbers it is heart-rending to see how their pleas for their innocence are drowned by the roars of ‘kill them’ that rented the air. How did we become this inhumane?

What has actually happened is that Pakistan has sown the wind of extremism and is now harvesting the whirlwind of barbaric militancy in various guises. In Taliban’s ways it is commonplace to sever the heads of people for different reasons like being identified as a traitor, belonging to security forces, or being a Shia. The victims are usually forcefully held by others while the executioners set to work amidst incantation and chanting of Allah’s name and glory by the crowd. Quite often the limbs of the victims are severed before slitting their throats. These are videotaped for all of us to witness the gruesome and painful end of these, mostly, young people. Perhaps this reincarnation of ancient barbaric ways is Taliban’s penance for an era that has elevated human reason to the supreme arbiter of human society and nature and has little place for their dogmatic codes of life and religion. Such videos, released by their perpetrators, perhaps help inspire the radical proponents of a Sharia that fuses the spirit of tribalism with certitude of self-righteousness in establishing Islamic fundamentalism while relying on the centuries old customs and traditions of the tribal areas. If that were not the case apologists like Imran Khan would not continually try and placate Taliban, even trying to march to Waziristan for doing so. This barbarism is not unprecedented even in modern era. There have been many far more brutal examples from Armenian Genocide, Holocaust, and America’s use of atom bombs to more recently in Liberia, Congo, Cambodia etc. However, filming and proudly releasing these films with a purpose is indeed without a parallel. That the purpose is fulfilled is evidenced in the fact that many people who do not dare deny or apologise are more concerned about inadvisability of posting such videos instead of rallying support against the perpetrators of such acts. Incapable of knowing civilization, let’s hope they soon pass from barbarism to decadence.

Where Did We Go Wrong? How Did We Get Here? A quick research into violence killing, kidnapping, robberies, sectarianism, victimization of minorities etc. would reveal how far Pakistan has plunged, all within the last 30 years. And each year is worse than the previous. In Africa, there is a proverb that advises to look for a black sheep during the day because once the night falls the sheep would blend with the darkness and it would be impossible to find it. Our apologists and strategists have obstinately refused to heed this wisdom. And now it is dark, very dark and stormy. Yet our discussions are mired in the ideology of a country where bad governance and greed have surpassed all norms, where mediocrity and theft are celebrated, where elections are largely the domain of a few hundred electable families, where religious extremism is on the march. The violence, sectarianism, intolerance, and persecution that we witness today is a natural denouement of all this. Mob killings of innocents and suspected, and large crowds chanting Allah’s glory as people from the opposite sects are identified and killed clearly show that it has now become our culture. It did not drop suddenly from the sky. Neither was it secretly implanted by one of our enemies. It was cultivated and nurtured by those who call themselves guardians of our ideology with the collusion or connivance of our political leaders. Our two major national passions consist in pontificating and harassing in the name of religion and succumbing to the lure of acquiring sudden and stupendous wealth. Impunity is the order of the day as the justice bows to the powerful. Army is beyond accountability and no one from a jihadist organization has ever been meted out justice.

Before Zia ul Haq, assassinations in the name of religion were never a concern in Pakistan. When Zia introduced Jihad, it came with vengeance and anger. Since then the religious fanatics have conveniently succeeded in indoctrinating and arming the zealots to do the killing for them. None of them had any qualms about setting their killing squads. Onward from IJT’s unprecedented strong-arm tactics in the educational institutions in early 1980’s, violence and assassination in the name of religion took on a life of their own. It seems that this atmosphere has now numbed our senses. Slightest of provocation suffices for us to sniff out life in the most gruesome manner. With millions of unemployed youth at hand and thousands of madrassas available to indoctrinate them, the right atmosphere has been created to commit any atrocity with the slightest provocation let alone in the name of religion. Most of the people who participate in these killings may not be members of any religious or political or ethnic party.  All they need for going into the streets killing people like enraged demons is for somebody to gather them to one corner, give them an overdose of some religious or ethnic conditioning, fire them with some hate-speeches against some people they have always been taught to regard as mortal enemies, and unleash them on society to wreak boundless violence. For example, the sudden violent reaction following Benazir’s assassination, a mob’s beating and brutally killing two young and innocent brothers in Sialkot, lynching on mere suspicion that is rife all over Pakistan, continued mutilation of bodies following the death after torture, pillaging and burning down of entire Christian neighbourhoods  etcetera all reflect wild celebrations of raw barbarity and extreme savagery with zealots rushing into the streets to do something they know how to do so well, and derive immense pleasure and animation from, namely, killing and maiming. It is a pity that an average Pakistan is condemned to share the same environment with some irredeemable savages in a lawless country where many people now believe they can just do anything that excites their warped minds and get away with it.  While the State’s writ stands eroded, all we can do is to fold our hands and continue to pray that nothing happens to inflame passions and offend habitual murderers perennially baying for blood and looking for the slightest reason to assuage their bloodlust.