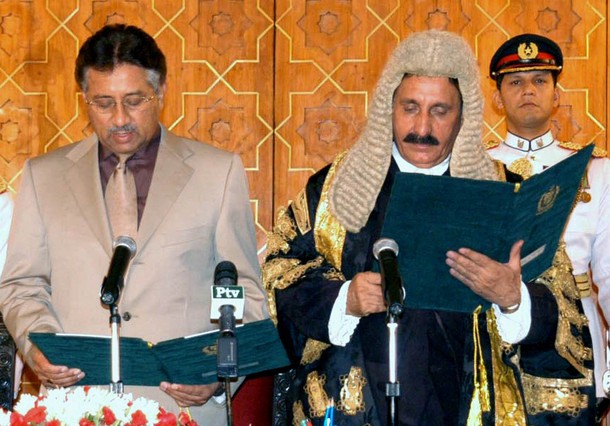 The apex court of Pakistan is ceased with the matter of the emergency declared by the then “dictator” Gen. Parvez Musharraf (Retd.). The Chief Judge has withdrawn himself from the bench which is hearing a petition seeking action against the ex-General  on the charges of abrogation of The Constitution. From the initial hearings of the case it appears that the matter of abrogation of constitution will be confined to Nov 3 2007 only. It will be a mock trial if it remains as such, because we have seen at least three occasions when similar type of treatment was meted out to our constitution.

First it was Gen. Zia Retd. who imposed Martial Law setting the constitution in abeyance on 5th of July 1977. He had to show the door to the incumbent Chief Judge so that he could get verdict in his favour when Ms Nusrat Bhutto challenge the imposition of martial law. The newly appointed judge obliged by validating his actions under the doctrine of Necessity. During the same period of martial rule Zia promulgated another PCO in 1981. Some more judges were shown the door. Ironically his hand-picked parliament gave indemnity to his actions in 1985. After the death of Zia a new era of people’s representatives which is the essence of our constitution started but could not survive for more than a decade. On October 12 1999 Parvez Musharraf took the reign of the country in his hands dismissing the Government and declared himself Chief executive. As far as CUSTODIAN OF THE CONSTITUTION (as is nowadays being preached ) is concerned the performance was similar with 1977 era. The Supreme Court of Pakistan lived up to its reputation and validated the General’s actions but this time the parliament had been intact but was suspended. The parliament could have been approached for validation but it was not done. The same military/ court nexus played its role and finally the parliament was also axed. This time the Supreme Judges allowed the dictator to amend the constitution at his will despite the fact that it was never requested. The General was allowed to rule autocratically for three years. In 2002 elections were held and the parliament validated the dictator’s action in 17th amendment.
The 17th amendment is by and large considered to be a replica of the 8th amendment, but there is a basic difference between 8th and the 17th amendment. Besides reviving the sweeping powers of the President like those of 8th amendment, this time another institution got the sweeping powers. It was none other than Our Own Independent Judiciary. The chief judge succeeded in inserting a new definition of consultation whereby the president of Pakistan was bound to accept the choice of The Chief Justice in appointment of Supreme Court and The High Court Judges (Article 260, Chapter Interpretation).This seems to be continuation of Military and Courts connivance against the political forces who seek their power from the masses rather that from selective appointments. The main argument against implementation of article 6 from the past (from 1999 or before) is that the actions taken after October 12 1999 and before passing of 17th amendment were validated in the 17th amendment itself. This argument is illogical because implementation of article 6 never ceases to effect. The moment abrogation or conspiracy to abrogate the constitution is done the persons doing so can be dragged under article 6. More so, at the time of coup the parliament had not been dismissed. The Supreme Court Judges ceased with the petitions against Oct. 12 action could send the matter to the parliament but they did not do so. The notorious law of necessity which had always been used in such cases was invoked and the fate of democracy was sealed. The Supreme Court Judges allowed Parvez Musharraf to rule for three years and awarded him powers to amend the Constitution at his will. The validity from the next parliament which is much talked about in favour of judges came in 2003 as fait accompli, because the damage done could not be repaired.
In contrast to October 1999, in Nov. 1999 perpetrator of the emergency approached the parliament and a resolution was passed in favour of the steps taken by The Chief of Army Staff. The Supreme Court Judges who took oath on or after Nov 3 validated his actions in the same coin as was done in 2000.
The above picture clearly shows that the 1999 action and its subsequent validation from the then Supreme Court require a High Treason case more than that of 2007. All persons involved in desecration of constitution on both occasions must be taken to task and punished. As for 1977 Gen. Zia has perished but a symbolic punishment like seating his statue in the gas chamber may suffice to check further such actions.