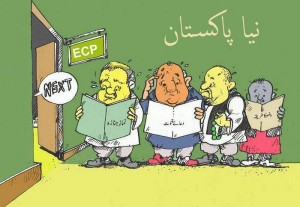 If the ECP’s lowly functionaries are left free to enforce their biases then Pakistan’s parliamentary elections scheduled for May 11, 2013, will be grossly unfair because of arbitrary disqualifications of candidates. This too at a time when the stakes are higher than ever as Pakistan stands at a precipice amid unbridled terrorism, sectarian violence, and economic infirmity.

By now, Ayaz Amir’s disqualification has been probably the one most talked about. However I will not comment directly on this as much is already being said in the matter to which I can add little further insight. I have enjoyed reading Ayaz for over twenty years and he now remains one of the few writers in our English press who write English in a manner that makes reading it a pleasure. I feel confident that Ayaz, and a few others, will be meted out justice when they appeal against the preposterous and nonsensical grounds used to disqualify them. However, for me the issue is symptomatic of a bigger philosophical problem that will continue to mar Pakistan’s progress until we are able to think clearly and act decisively in the matter.

The problem lies in our struggle to navigate a world where we expect to partake of western education and democracy and all the values, privileges, and knowledge that come with it and yet remain hostage to commanding belief of our own culture and political Islam. It is a simple narrative of the practical difficulties in governing a country and a society under two conflicting political systems rooted in incompatible values. While we yearn for western-style governance, we view many of its values –like equality, freedom of expression, liberation of women- cloaking sinister anti-Islam motives. Therein lies the cause of many of our ills. There has not yet been a society which has been able to espouse the spirit of modern democracy and yet proclaimed to be an Islamic Republic. None ever and we will probably never be able to create one for a number of reasons that are beside the point here. Even a purely theocratic state (like Iran or Saudi Arabia) can venture forward more resolutely than the potpourri of a political system that we have created for ourselves. The result is a state where it is a crime to sin but openly spreading hate and inciting violence in public in the name of religion’s sectarian strands is not a crime. When Bhutto boasted forty years ago that the constitution promulgated by him has more Islamic provisions than any other country’s constitution in the world, he set in motion a wicked fundamentalist drift in the nation’s affairs that was cleverly manipulated by Zia ul Haq and continues to infuse our systems ever increasingly as the time trundles on.

Since April 17, 2008, Pakistan is a party to the Covenant for Civil and Political Rights (ICCPR). The Covenant requires Pakistan to provide equal opportunity to its citizens to participate in the election process as candidates. Article 25 of ICCPR states that “every citizen shall have the right and the opportunity, without any of the distinctions mentioned in article 2 and without unreasonable restrictions to vote and to be elected at genuine periodic elections which shall be by universal and equal suffrage and shall be held by secret ballot, guaranteeing the free expression of the will of the electors.” Pakistan’s election laws and current procedure constitute a set of “unreasonable restrictions” that deprive any citizen who does not espouse certain religio-political beliefs or an officially sanctioned version of the Pakistani Ideology —according to a subjective vetting process often involving nonsensical religious tests– from participating as a candidate in the elections.

It is clear that Shaikh ul Islam Tahir ul Qadri’s long march has not gone waste. The current electoral process marks a big gain for the fundamentalists as the returning officers have been empowered to screen the hopefuls for commitment to Islam and their belief in the ‘Ideology of Pakistan’. The vetting process involves recital of Kalma, Quran, and Azan. Thus, Islamic piety is now established as a core competency for our parliamentarians. The law (articles 62 and 63) is moot on the methods by which the fulfilment of these ‘competencies’ is to be documented and determined. The election authorities at the ECP are charged with investigating each candidate.

This process of vetting candidates fails to comply with international standards for free and fair elections, especially in a country with a reasonable tradition of party membership and discipline and detailed party platforms. By all indications, the election process is being manipulated by semiliterate hard-line returning officers to ensure that only candidates who they consider good Muslims and Pakistanis would compete in vast majority of districts. The righteous composition of the parliament is thus being decided ahead of the elections. This vetting process egregiously violates international standards for democratic, free, and fair elections.

I sincerely hope the next parliament reforms the constitution election law according to international standards to guarantee the rights of every citizen, including non-Muslims, to participate in the election process in accordance with accepted norms for free, fair, and democratic elections. That the last parliament failed to do it signifies the lack of moral courage that is the story of Pakistan today, the good and independent minded sucking their thumbs in their several corners while the forces of extremism are on the march.