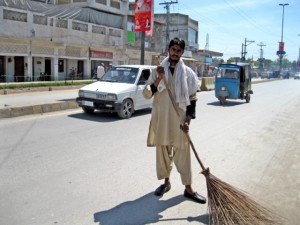 Despite having lived in the same areas for considerable time periods, Christians still sit on the fringes, looking in. PHOTO: ASAD ZIA / EXPRESS

“I am a sweeper, my sons will be sweepers and, in the future, so will my grandsons,” he says.

In a jarring similarity shared with the rest of the country, most Christians in Khyber-Pakhtunkhwa perform sanitation duties. The employers may vary – the municipal government, private homes, offices, hospitals, schools, hotels, factories, and even waste companies – but the job function remains the same across provincial borders.

“Nothing changes for us,” says Masih. “We will live and die sweeping.”

When Masih speaks, he projects a certain acceptance of social realities. He has two children, lives in a small home in Cantt, and makes Rs12,000 a month, for which he is grateful. Although his children go to school, he foresees that they too will become sweepers.

“We are born for this work. The majority of Christians work as sweepers. So why should my kids expect to lead a life that is different from mine?” he questions.

Though some may think it a negative attitude to take, Masih has a point. He talks from experience. Three of his elder brothers hold the same job in different areas around Peshawar.

“What are the benefits of education for our people when we know that, ultimately, none of us will amount to more than sweepers? We will be sweepers even if we are graduates,” he says.

According to the K-P Auqaf, Hajj and Religious Affairs Department, minorities make up 0.4% of the total population of the province, which comes to 70,000 individuals. This figure includes Christians, Hindus, Sikhs, Balmkee, Kalasha, Ahmadis and Parsis. The last census report illustrates that Christians outnumber other minority groups.

Despite having lived in the same areas for considerable time periods, Christians still sit on the fringes, looking in.

“We have lived in Peshawar for centuries and have no problems as such. We perform our religious rituals in church and don’t face hurdles in that respect,” says Masih. “However, people generally don’t want to mingle with us socially.”