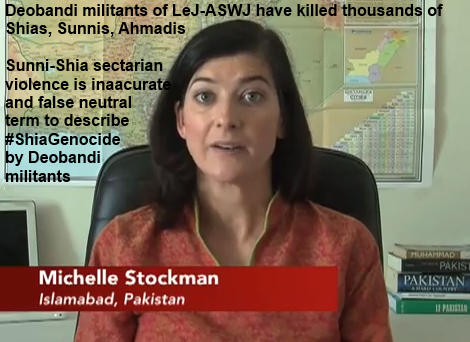 Michelle Stockman of Link TV has compiled a useful report on the gravity of Shia genocide in Pakistan by Deobandi militants of the Lashkar-e-Jhangvi.

Since the beginning of the year (2013), more than 350 Shia Muslims have been killed and hundreds more injured in bombings and targeted killings in Pakistan. Islamabad-based journalist Michelle Stockman reports (for Link Asia 29 March 2013) on who’s behind the violence, and how Pakistanis protesting the violence are using social media to get their message out.

However, there are a few important omissions or errors in the report:

1. Deobandi militants of the Lashkar-e-Jhangvi (LeJ, currently operating as Ahle Sunnat Wal Jamaat ASWJ, previously known as Sipah-e-Sahaba Pakistan SSP) have been described as Sunni militants. This false identification hides the fact that in addition to killing at least 21,000 Shia Muslims, Deobandi militants of the LeJ-ASWJ have also killed thousands of Sunni Sufi Barelvi Muslims through numerous attacks on Sufi shrines in Lahore, Karachi, Peshawar and Balochistan.

3. The reporter does not acknowledge that in addition to 600 Shia Hazaras killed in Quetta, at least 300 non-Hazara Shias too have been killed in the same city. Thus, Shia genocide is not an ethnic issue. Shias of all ethnic backgrounds from Quetta to Gilgit and from Karachi to Peshawar are being killed.

Barring the omissions reported above, it’s overall a worthy report. We hope that the reporter will continue to cover Shia genocide and prepare future reports with the above feedback in mind.