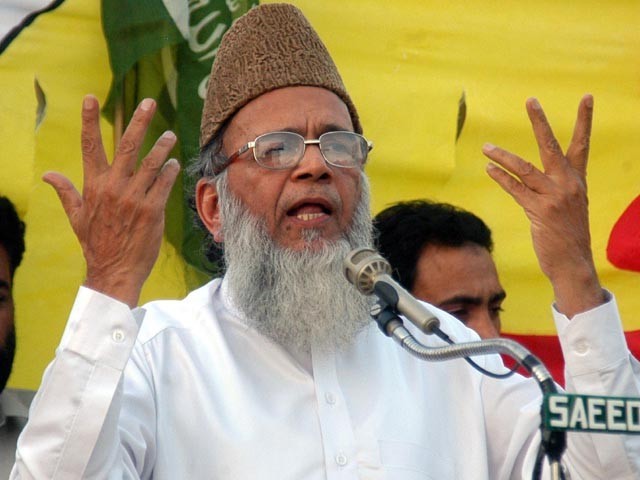 I found this argument by Munawar Hassan of the religio-political party Jamaat-i-Islami to be unbelievably disgusting and fundamentally blasphemous in the way he invokes the Qur’an to justify blatant misogyny:

Anchor: Why did you vehemently oppose the women protection act?
Munawar Hasan: Women protection act was not aimed at protecting women instead it is meant to promote vulgarity and obscenity in the society.
Anchor: What is the basis of your allegations?
Munawar Hasan: On the basis of which we opposed the act.
Anchor: The fundamental purpose of the women protection act was (is) to provide women with the right to file cases on the basis of circumstantial and forensic evidence, making convictions of rape easier. Where is the obscenity in that?
Munawar Hasan:  This bill has been part of law for years, how has that affected the rights of women in Pakistan? What is the one issue that can be pointed out as a success of this law?
Anchor: One blaringly obvious problem with the Hudood law was the need to present four witnesses in order to convict a rapist, failure to do so resulted in the arrest of the woman on charges of confession to adultery, that was the main issue.
Munawar Hasan: What is the problem in that?
Anchor: The problem is this sir, that according to the 2003 national commission status of women report 80 per cent women were forced to languish in jails because of inability to produce witnesses of their rape.
Munawar Hasan: The objective of Islam is to discourage such acts, no one can be shameless enough to commit such an act in the presence of four people. Making it impossible to prove such acts, therefore the whole idea is to discourage bringing such acts into public light. Discouraging it to the extent that the act is never quoted. If such a crime occurs and since there are no witnesses than both men and women are suppose to keep it under wraps and not discuss it in public.
Anchor: Sir, are you suggesting that a woman should stay silent after she is raped? That she should not report the crime?
Munawar Hasan: I am saying she should keep quite if she has no witnesses. If she has witnesses than she should present them.
Anchor: What kind of an argument is that? A woman is raped and she has to look for witnesses to prove the crime?
Munawar Hasan: Argue with the Quran and not me.
Anchor: I am not questioning the Quran, I am questioning your argument.

This is unbelievable. Why do extremist (pro-Taliban, pro-Sipah-e-Sahaba) Islamists always make the poorest, most ignorant religious arguments?

In the Qur’an, four witnesses are required to prove zina (adultery), not rape. That is a key distinction, and the Qur’an is merciful, in that by requiring 4 witnesses, the standard for proving adultery is set so high as to be impossible. That is as it should be, since the penalty for adultery is so severe (100 lashes – the Qur’an does not prescribe stoning). But adultery is not rape. If you are raped, you did not commit adultery. Adultery is a category of illicit, but mutually consensual, sexual intercourse. Obviously in rape, the sexual intercourse is forced by one party upon the other without their consent – that is the very definition of rape.

In fact, centuries of Islamic jurists have established consensus that rape is not a category of adultery, but rather of hirabah (terrorism). Here is an excellent resource from MuslimAccess on rape in Islam by Uzma Mazhar – from which I am copying liberally:

During the time of the Prophet (saw) punishment was inflicted on the rapist on the solitary evidence of the woman who was raped by him. Wa’il ibn Hujr reports of an incident when a woman was raped. Later, when some people came by, she identified and accused the man of raping her. They seized him and brought him to Allah’s messenger, who said to the woman, “Go away, for Allâh has forgiven you,” but of the man who had raped her, he said, “Stone him to death.” (Tirmidhi and Abu Dawud)
[…]
Islamic legal scholars interpret rape as a crime in the category of Hiraba. In ‘Fiqh-us-Sunnah’, hiraba is described as: ‘a single person or group of people causing public disruption, killing, forcibly taking property or money, attacking or raping women (hatk al ‘arad), killing cattle, or disrupting agriculture.’

The famous jurist, Ibn Hazm, had the widest definition of hiraba, defining a hiraba offender as: ‘One who puts people in fear on the road, whether or not with a weapon, at night or day, in urban areas or in open spaces, in the palace of a caliph or a mosque, with or without accomplices, in the desert or in the village, in a large or small city, with one or more people… making people fear that they’ll be killed, or have money taken, or be raped (hatk al ‘arad)… whether the attackers are one or many.”

Al-Dasuqi held that if a person forced a woman to have sex, his actions would be deemed as committing hiraba. In addition, the Maliki judge Ibn ‘Arabi, relates a story in which a group was attacked and a woman in their party was raped. Responding to the argument that the crime did not constitute hiraba because no money was taken and no weapons used, Ibn ‘Arabi replied indignantly that “hiraba with the private parts” is much worse than hiraba involving the taking of money, and that anyone would rather be subjected to the latter than the former.

The crime of rape is classified not as a subcategory of ‘zina’ (consensual adultery), but rather as a separate crime of violence under hiraba. This classification is logical, as the “taking” is of the victim’s property (the rape victim’s sexual autonomy) by force. In Islam, sexual autonomy and pleasure is a fundamental right for both women and men (Ghazâlî); taking by force someone’s right to control the sexual activity of one’s body is thus a form of hiraba.

Rape as hiraba is a violent crime that uses sexual intercourse as a weapon. The focus in a hiraba prosecution is the accused rapist and his intent and physical actions, and not second-guessing the consent of the rape victim. Hiraba does not require four witnesses to prove the offense, circumstantial evidence, medical data and expert testimony form the evidence used to prosecute such crimes.

To summarize, rape is hirabah (terrorism), not zina (adultery) – punishment should be meted to the rapist, and the victim of rape should not be punished in any way. A statement of being raped is not a confession to adultery. All of this is not some modern reinterpretation on my part, but a robust, centuries-old consensus of all major schools of jurisprudence in Islam.

In the Pakistani context, it was the debate in 2006 that led to the Protection of Women Act later that year, which extremists like Jamaat-i-Islami opposed. Clearly, they haven’t evolved or become any more enlightened in the past five years. This all points to the difficulty of legislating morality – what’s needed is not top-down reform but a sustained campaign for civil rights at the grassroots level to change the public perception. This is how civil rights were won in the United States, by the most downtrodden and persecuted group in American society. I wonder if Pakistani women can do the same. Certainly not overnight, and not with a single law.