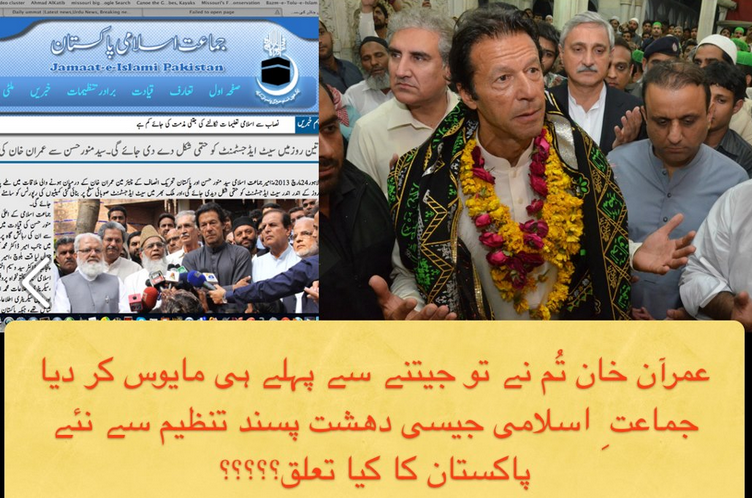 That you are seeking a seat adjustment with Jamat e Islami, despite its questionable past, does not bother me, though Jamat still seems more interested in PMLN than your Tsunami. Our first problem is basic good and clean governance.

Ideological superfluity can wait. If you think you can ensure good governance with JI, so be it. There are both minuses and pluses for PTI in seeking an adjustment with JI but it is entirely legitimate. To be able to use strange bedfellows to one’s advantage is an important ingredient of universal political acumen and JI will surely offer you a stern test in that respect. By the way it reminds me that naiveté usually makes an easy bedfellow with extremism. But please don’t be too naive, as our hopes rest on you, and keep your eyes on the ball.

However, your flirting with Jamaat e Islami is not the reason why I am writing to you. Instead I write to you here because yesterday you said something that is unwise, when you declared that if you are elected Prime Minister you will not take oath from President Zardari. Whatever Zardari’s foibles, your statement is downright undemocratic and one does not need to write much to explain why.

Now please don’t think I have a soft corner for Zardari. No, I don’t because, regardless of the factors responsible for it, he has presided over an unprecedented mayhem in the history of Pakistan, including a mindfully ruthless slaughter of innocent Pakistanis, of various ilk, by the jihadists. (Between you and me, I have also been jealous of him for a very long time because he used my first and middle names and initials –A A Z- to lure Benazir into marrying him.) What miffs me here is twofold. One, it makes you characterize a paradox in that you are willing to contest elections under Zardari but yet proclaim that you will not take oath from him. Two, and more importantly, I feel slighted. You could have said that if you come into power you will try Zardari for corruption or whatever. But by saying that you will not take oath from a democratically elected president, you have insulted the constitution and all the people of Pakistan –notwithstanding who they voted for- who participated in the last elections leading to Zardari’s election as an authentic president of Pakistan, quite unlike a usurper like Musharraf who some people, who you might know, warmly welcomed in power and supported for varying numbers of years.

As someone who has always admired your personality, character, honesty, perseverance, and courage and who clearly thinks that you present the best choice (among a lot of poor ones) in this election, I desperately want to see you able to speak impromptu with some insight and intelligence. I support you because, to borrow Napoleon’s wisdom, in Pakistani politics stupidity has never been a handicap but in you we yearn to find someone who can give an account of his ability with opportunity, as you always have when tested. Finally, you must realize that your league as a leader has now changed and with that comes the responsibility of carrying the burden of a nation’s hopes and image rather than agitating.