As the world was keenly waiting for the white smoke to appear on the Vatican House Chimney, Joseph Colony in Lahore was filled with black smoke. When Vatican Council was wrapping-up their Papal Elections, its followers were attacked and their houses were torched by angry Mobs  leaving 160 houses incinerated. The excuse of their Barbarism was an alleged ‘Blasphemy’ on Islam by one of the residents of the Joseph Colony. So far the Civilian Government and the Military of Pakistan has failed to nab the perpetuators and also neglected to adequately compensate the Poor victims of the effected colony. Joseph Colony near BadamiBagh in Lahore is a small impoverished and economically backward suburb in Pakistan, Its residents are mostly Christian. 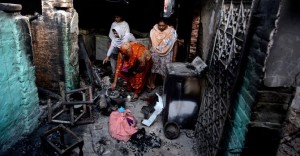 There have been several attacks on minorities in the recent past. The Mob transgression has exceeded in Pakistan mainly due to the corrupt and ineffective Policing. In 2009, similar types of Lynch Mobs of Takfiri deobandi Sipah Sahaba Taliban (ASWJ/LEJ)  had decimated a village in Gojra town in Punjab Province killing nine people from the minority community. And the perpetuators are roaming free with impunity. The worst to suffer are Ahamadiya’s, a tinyreformist Muslimsect originated out of life and teachings of GhulamMirza Ahmed. The Ahmadiya sect is a moderate and progressive in its essence and has disassociated from the purist Sunni Islam sect, they make up roughly about 3% of Pakistan’s population. The Ahmadiya Mosques have been constantly bombarded in the recent years, vaporizing thousands of devotees in the height of enormity. Moreover, the Laws in Pakistanare discriminatory in character often biased and irrational. The latest act of hooliganism in Pakistan signifies horrendous potential threatsdirecting  weaker sections of the society. The alarm bells are ringing, time is running out, the chains of these lynch mobs have been let loose and they are on fire. Someone has to stop them. 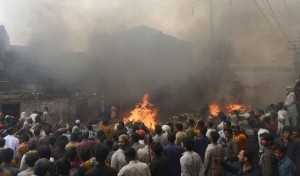 MOB THAT RANSACKED AND DECIMATED THE HOUSES AT JOSEPH COLONY

Pakistan is predominantly a Sunni Muslim country, which make up about 85% of the population, 60 % are Brelvi and the rest are Deobandi and Ahel E  Hadith. The rest are Shia’s who make up around 10% and Ahmadiyas (who have been legally discarded as muslims). The Hindu and Christian population make up roughly around 3%. Before the time of partition many Goanese and Mangalorean Catholics had flocked to Karachi for better prospects, which wasindustrialized under the British rule. And after the partition when the new state of Pakistan was formed, many Hindus, Sikhs, Zorastrians and Christians had remained, mainly because of the promise of security and Economic prospects underlined by the founder Muhammed Ali Jinnah (a Shia Muslim). During its formation and the early years Pakistan was shaping as a plural, liberal and Tolerant society.

But later, as the religious establishment became more vibrant, they started targeting minorities’indiscriminately.Pakistan record of treatment of minorities has been dismal. There have been persistent attacks on minorities ever since the nation’s inception in 1947. In 1953 there was riot organized againstthe tiny ahmadiya community by right wing Islamo Facist Parties, that continued till the 1970’s. Later when democratically elected President Zulfiqar Ali Bhutto assumed power, due to the enormous pressure from clergies and other extremist groups, He made an unpardonable crime of declaring Ahmadiyas as Non-Muslims. And as till date there have been constant attacks on Ahmadiyas by various Relegious Terror Groups. 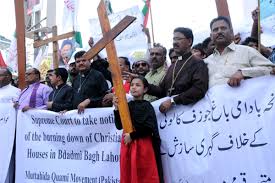 MINORITIES AND PEACE ACTIVISTS IN KARACHI

In the 80’s Zulfiqar Ali Bhutto was thrown out of power and subsequently hanged by a brutal Dictator General Zia UlHaq. Zia took power by force and initiated his Autocratic rule. Gen Zia UlHaq was a heartless man, years of life spent in Army, had made a stone faced –evil- inhuman human out of him. He was a Narcissist like Hitler or Mussolini, he would go to any extent to assume power. He wanted win the hearts of millions of illiterate, uneducated and poor people of Pakistan, thus he used Religion. He patronized religious institutions and brought the Mullah (Clergy) into the main stream. 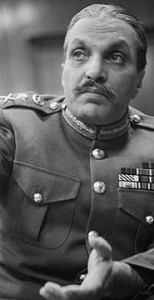 He  laid a special emphasis on Pakistan’s ideology, one with religious instincts. He introduced religious education in schools indoctrinating young minds. The text books taught distorted history, political manipulation, pseudo- science, Jingoism and hate towards other faiths and nations. When his opponents were germinating in large numbers ,General Zia passed Purists and moral signals by banning cinema, music, literature and all kinds of Liberalism, thereby driving the country towards stone-age. In addition toappease the religious goons whom he had fed and pampered, he passed the Draconian ‘blasphemy laws’ in the Pakistan’s constitution. The  Law enacted under Zia’s reactionary dictatorship, gradually developed into an instrument of persecuting the country’s insecure minorities, and has been  acting as a sword on their neck ever since.

The school children of the 80’s have grown up today as a Right wing high voltage Jingoistic men and women. It has led to the complete breakdown of the society, which was once plural and tolerant. The Blasphemy Laws have now become viral, civilians are using it as a pretext for personal vengeance. Even the Pakistan’s highly influential and vocal  media has been silent on it. Few brave men like the Punjab Governor Salman Taseer and Minister for Minorities ShabazBhatti( also a Christian ) who had fought to repeal and abolish this law have been murdered by the religious fanatics. He Accused the banned Deobandi outfits of  Sipah Sahaba Taliban (ASWJ/LEJ). Hours before his death Late Salman Taseer had tweeted “My observation on minorities:A man/nation is judged by how they support those weaker than them not how they lean on those stronger”

Pakistan is a society which has failed to reason. The early indoctrination of school children has wiped away their intellectual and rational sense. The Pakistani establishment the military is pandering to the Mullahs and funding them incessantly to groom young martyrs for fighting against India.

It was the similar situation in 1920’s Germany, when Hitler’s Nazi Party acquired power. They hauled slogans against Jews and Communists. The Nazi political rhetoric was anti-semitic in everysense, they blamed Jews for all the Germany’s failures and called for the extermination of Jews from Germany. Once the Nazi’s emerged powerful they imposed their rigorous ideology with thrust. Free speech was curtailed, international treaties were broken, laws were amended, dissent was opposed,  anti Hitler books were burned.  Several high profile Jews had to seek asylum elsewhere, many newspapers published anti -semitic Cartoons, their Rights were minimized and the community became vulnerable and lived in constant fear.

JEWS OF NAZI GERMANY, WHO WERE LATER GAS-POISONED

As the World watched this cruelty and injustice with utmost passivity, nearly two million jews were massacred  by Gas-Poisoning in concentration camps. Pakistan has transformed into a chaotic and a lawless state, with demonic minds fostered by mass-brainwashing.  It is tense as a pressure cooker and might explode anytime the lid opens up.Therefore it has become nearly impossible for religious minorities (both muslim and non-muslim) to take a breath in Pakistan. Their condition has become more or less similar to the jews under the Nazi Germany. The role of Nazis is played by the Takfiri Deobandi Militans of the Sipah Sahaba Taliban in Pakistan. Their principle backers are the Punjabi deobandi establishment.

India has to share the responsibility of turning pakistan into a mess. It is easier to label its neighbor, which was once its part as a Terrorist state, than to cooperate with in counter-terrorism and de-radicalization projects. India being a largest and a successful democracy in the South Asian-Middle Eastern region needs to take a position on Pakistan’s state and societal collapse. Unable to bear the atrocities, thousands of minorities have already packed their bags and are heading towards other countries. This is a serious issue and the Indian government must swiftly urge International Community to bring pressure on Pakistan’s negligence, injustice and procrastranation. This will be defining movement in history, where the next generation will be academically discussing about, whether Timely action against Pakistan by India and International Governments would have prevented the Genocide?