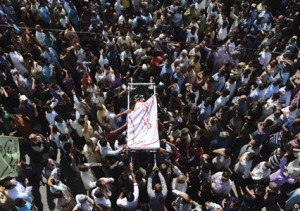 After the Feb. 16 massacre of 90 Shia Hazaras in Quetta, and the universal condemnation of the act, Pakistan’s politicians are desperately distancing themselves from the terrorist group that owned the slaughter, Lashkar-e-Jhangvi.
Interior minister Rehman Malik says opposition party Pakistan Muslim League (Nawaz), which rules the Punjab, is actually politically aligned with the militant group through Jhangvi’s mother organization, the Shia-hating Sipah-e-Sahaba, and that the Punjab government is, therefore, not interested in taking action against Jhangvi strongholds in the province.
Sipah-e-Sahaba—internationally banned as a terrorist organization and often described as “defunct” by the local media—rests in a legal penumbra in Pakistan after cases against its leaders, including at the Supreme Court, have not led to its proscription. Nonetheless, Jhangvi has changed its name to the deceptive Ahle Sunnat Wal Jamaat, and its domination of southern Punjab, heretofore thought by many to be the powerbase of the rival Pakistan Peoples Party in the province, has persuaded the PMLN into an electoral accommodation for at least 15 seats of the National Assembly, according to Jhangvi itself.
The ticklish fact for the PMLN is that the leader of the banned Jhangvi, Malik Ishaq, let off by the Supreme Court in July 2011 in the various murder cases against him, including the murder of an Iranian diplomat in Multan in 1997 for which an antiterrorism court had awarded him death, was made vice president of the vaguely banned Ahle Sunnat last September. The brave antiterrorism judge fled the country and the witnesses in the case were made to disappear. One witness killed was a senior police officer from Gujranwala, Ashraf Marth, who was related to former prime minister Chaudhry Shujaat Hussain.
The Shia of Quetta and the Kurram tribal agency have complained about this dubious “coalescence” through Punjab’s Law Minister Rana Sanaullah, who paid a well-publicized visit to the graves of Sipah elders who died in their war of terror against Pakistan’s Shia. Says Sanaullah: “We cannot say that all banned outfits and organizations are involved in terror activities. There is no such entity as the Punjabi Taliban.” In fact, the PMLN has mounted its election campaigns for its members in south Punjab with the help of Sipah leader Ahmad Ludhianwi, who openly confirms the arrangement as the transaction legitimizes his organization spreading its lethal tentacles into Sindh and Karachi as well.
The truth is that Jhangvi or Ahle Sunnat—counted together with fellow Deobandi and Shia-hating Jaish-e-Muhammad—are the de facto masters of south Punjab and no one can survive, let alone win elections there, without the cooperation of these overtly sectarian outfits once known for supplying cannon fodder for Pakistan Army’s covert wars in Afghanistan and Kashmir.
South Punjab, where landholdings are large, was once dominated by feudal strongmen who ruled through “police station and the court.” Today, they are powerless in the face of these nonstate actors. Before exercising their feudal muscle they now have to be on the right side of the powerful local clerics.
The PMLN confirms this domination of the region by accusing PPP politicians of winning their seats in Punjab and Sindh with the support of the terrorists: it says Shah Mahmood Qureshi (now with Pakistan Tehreek-e-Insaf), Khurshid Shah, Qamar Zaman Kaira, Jamshed Dasti won their seats in 2008 with the “permission” of local militants.
In his latest salvo against the PMLN, interior minister Malik said in Karachi on Feb. 25: “I will go to court against the government of Punjab to prove that it is facilitating Lashkar-e-Jhangvi.” He got an earful from the PMLN the same day. Equating the banned Jhangvi with the vaguely banned Ahle Sunnat, it accused the PPP of enlisting the help of infamous Sipah leader Azam Tariq in getting south Punjabi Farooq Leghari elected as president in 1993. (Tariq was allowed to contest the National Assembly election by the Election Commission “through a mistake.”) In return, the PPP government issued 12 Kalashnikov licenses to Tariq, the PMLN accusation said.
There was more leg-up to Sipah as it demanded apostatization of the Shia in Pakistan. PPP stands accused of inducting a Sipah terrorist into its Punjab cabinet in the 1990s to defeat the PMLN leader Ghulam Hyder Wyne, later giving dozens of weapon licenses to the Sipah member’s sons in the Punjab and Sindh, and that the current PPP government at the center had allowed Malik Ishaq free movement in and out of the country, especially to the Gulf, where the Arabs are known to disburse money to kill the Shia. According to one critic, Jhangvi was formed when a number of its leaders quit Sipah in protest against this “cooperation” with the PPP.

It is interesting to note that the late Benazir Bhutto, after her October 2007 brush with death in a suicide attack in Karachi, had said that out of the three terrorists employed to blow her up, one was a Sindhi. This man was later discovered to be a member of Jhangvi. Much earlier in the 1990s, PMLN leader Nawaz Sharif was nearly killed by a Jhangvi-planted bomb near his residence; and a killer of Jhangvi, Riaz Basra, had penetrated his house security to get himself photographed with him during a meet-the-people gathering.
Shia-killing went on during the jihad in Afghanistan fought covertly by Pakistan with the help of Saudi Arabia and the U.S. In 1998, when the Taliban finally overwhelmed the northern city of Mazar-e-Sharif, a Northern Alliance stronghold, they massacred the Shia in the city, including a number of Iranian consular diplomats. It was reported that the Mazar killing fields were the work of the Sipah boys sent from Pakistan as nonstate actors. Some Shia websites that point to the U.S. as one of the backers of Jhangvi cannot fail to note that Jhangvi was named among the killers of the American journalist Daniel Pearl in Karachi in 2002.
The Shia in Quetta have been vocal about who is actually killing them in contrast to their earlier blanket accusation of America, meant to rebuke the Taliban that they were America’s hired killers. This time they are accusing “the Arabs” of funding Jhangvi from Dubai.
This January, the Kurram Shia were among the 1,000 Pakhtun workers that the United Arab Emirates deported simply because their names were Shia-sounding. The fear of Iran drives the sparsely populated Arab states across the Gulf; and fear of an American-Arab joint action against them affects the Shia communities in Pakistan. In Bahrain, when the Shia-majority population was recently mauled by their Arab rulers, Pakistani participation on the Arab side—in tandem with Saudi Arabia—was suspected.
If fear drives the politicians of Pakistan, there are grounds for it. Ahle Sunnat and its two offshoots, Jhangvi and Jaish, are affiliated with Al Qaeda and the Taliban. Handbills found in the federally-administered tribal areas depict Al Qaeda flags with Tehrik-e-Taliban Pakistan, Jandullah, and Jhangvi written on them. The current leader of the Pakistani Taliban, Hakimullah Mehsud, was killing the Shia before he was elevated to his office. The ongoing massacres in Kurram and Orakzai, and the Khyber-Pakhtunkhwa cities of Kohat and Hangu, are carried out by his faction and his lieutenant warlord Tariq Afridi of Darra Adam Khel. The old Sipah vendetta with the Shia that started under Gen. Zia-ul-Haq’s regime goes back to the great Gilgit massacre of 1988, since claiming hundreds of Shia victims each year. The Al Qaeda-led sectarian war in Iraq annually claims 1,600 lives; Pakistan comes second with 1,400.
Many observers think Pakistan will need these Shia-killing nonstate actors for the Afghan civil war expected to start after U.S. and NATO forces leave Afghanistan next year. The Afghan Taliban who could not muster more than 30,000 men under arms when they ruled Afghanistan from 1996 to 2001 would need Al Qaeda-connected men from Pakistan to fight the Hazara-Uzbek-Tajik part of the fully trained and battle-worthy 350,000-strong Afghan National Army that the Americans plan to leave behind. Shia leader Amin Shaheedi in Quetta knows this and accuses Pakistan of looking the other way as its nonstate actors kill his people.
In his book The Shia Revival: How Conflicts within Islam will Shape the World, Vali Nasr traces the Hazara extermination campaign to regional politics. Saudi Arabia’s Rabita al Alam-e-Islami organization funded a compilation of Pakistani fatwas in Lucknow, India, under the authority of Maulana Manzur Numani in 1986. Distributed in Pakistan, these fatwas thereafter led to the killing of the Shia.
In 2003, in one of the worst sectarian assaults in the history of Pakistan, 58 Hazara Shias were killed in Quetta. Next year in 2004, another 38 Hazaras were killed on the day of the Ashura, their most holy occasion. Just before the 2003 attack, Quetta was flooded with leaflets, clipped from the Manzur Numani book of fatwas declaring the Shia an apostate community. From the attacks this January and February, the combined death toll is some 200 people so far.
After the 2003 massacre, the Shia imam of Quetta said the attack was jointly carried out by Sipah-e-Sahaba, Jaish-e-Muhammad, and Lashkar-e-Jhangvi, and that prior information about it had been given to the administration in Quetta. To this day, the state is helpless to act against this campaign of extermination.