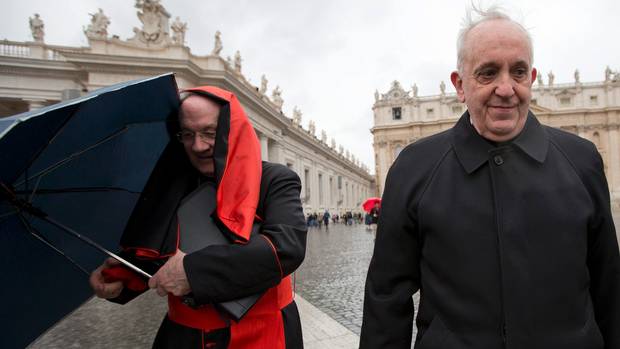 Canadian Marc Cardinal Ouellet, left, holds on to his umbrella next to Argentine Cardinal Jorge Mario Bergoglio as they walk in St. Peter’s Square after attending a cardinals’ meeting, at the Vatican, Wednesday, March 6, 2013.

He is also the first Jesuit pope.

Bergoglio is of Italian descent. Not the *biggest* leap beyond Europe the cardinals could have picked.

Bergoglio, 76, has spent nearly his entire career at home in Argentina, overseeing churches and shoe-leather priests.

The archbishop of Buenos Aires reportedly got the second-most votes after Joseph Ratzinger in the 2005 papal election.

Bergoglio was born in Buenos Aires to an Italian immigrant and railway worker, and has four brothers and sisters.

Bergoglio’s reputation for personal simplicity also exercised an undeniable appeal – a Prince of the Church who chose to live in a simple apartment rather than the archbishop’s palace, who gave up his chauffeured limousine in favor of taking the bus to work, and who cooked his own meals.

Three days before the 2005 conclave, a human rights lawyer in Argentina filed a complaint charging Bergoglio with complicity in the 1976 kidnapping of two liberal Jesuit priests under the country’s military regime, a charge Bergoglio flatly denied.

There was also an e-mail campaign, claiming to originate with fellow Jesuits who knew Bergoglio when he was the provincial of the order in Argentina, asserting that “he never smiled.”

His original plan was to be a chemist, but in 1958 he instead entered the Society of Jesus and began studies for the priesthood. He spent much of his early career teaching literature, psychology and philosophy, and early on he was seen as a rising star.

From 1973 to 1979 he served as the Jesuit provincial in Argentina, then in 1980 became the rector of the seminary from which he had graduated.

Bergoglio won high marks for his compassionate response to the 1994 bombing in Buenos Aires of a seven-story building housing the Argentine Jewish Mutual Association and the Delegation of the Argentine Jewish Association. It was one of the worst anti-Jewish attacks ever in Latin America, and in 2005 Rabbi Joseph Ehrenkranz of the Center for Christian-Jewish Understanding at Sacred Heart University in Fairfield, Connecticut, praised Bergoglio’s leadership.

Bergoglio is seen an unwaveringly orthodox on matters of sexual morality, staunchly opposing abortion, same-sex marriage, and contraception. In 2010 he asserted that gay adoption is a form of discrimination against children, earning a public rebuke from Argentina’s President, Cristina Fernández de Kirchner.

Bergoglio had a lung removed due to infection when he was a teenager.

Bergoglio has the the kind of self-effacing humility that fellow cardinals value highly.

Bergoglio has lived austerely: preferring for years a simple bed in a downtown Buenos Aires room to ornate mansion.

Critics accuse Bergoglio of failing to stand up publicly against Argentina’s 1976-1983 military dictatorship.