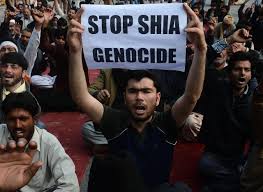 This is not a knee-jerk reaction to Abbass Town! there is Quetta before it, Gilgit before that, the daily targeted slaughter of Shia doctors, teachers, civil servants, lawyers, businessmen, the bombing of Shia processions and places of worship in Karachi, Lahore, Quetta, Peshawar, Rawalpindi, the 5 year long siege of Para Chinar in the tribal belt, the list goes on. Extremists bleed this community on a daily basis across Pakistan and have been for the last 30+ years.

Successive governments in Pakistan have been cosying up to, harbouring and promoting the very (Takfiri Deobandi) extremists that the majority of the populous wants them to reign in,rehabilitate! or exterminate!

It is common knowledge there are many within the Pakistani army and political parties (those in power and those sitting on the opposition benches vying for it) that are in cahoots with the extremist outfits, some for ideological reasons and others for vote banks and protection.

The judiciary is responsible for acquitting people like Malik Ishaq Deobandi and other monsters amongst men. The intelligence agencies for providing such monsters protective custody; to rain terror and continue to brainwash, coerce and recruit radicals to swell the ranks of their extremist organisations and of course to continue the genocide and the mass murder of those who stand against it from within other sects (as is now the case with the Sunni Barelvi Muslim community in Pakistan).

The enforcement agencies are complicit by their inability to protect civilians or witnesses that can enable the judiciary to take the monsters to task. The politicians increasingly depend on the extremist outfits for votes and propping up their power base (particularly in Punjab).

International pressure would certainly help; determined international will with follow through is the only type that could yield results. The kind of determination and will that has been levied on Iran, will bear fruit.

Do international governments by which I mean the EU, Britain, USA and BRIC have the will to impose sanctions on the Pakistani military that Cameron so rightly said looks both ways! Do Obama and Cameron have the will to raise this as a centre stage issue and lead on it? Right next to Assad’s war on his populous in Syria and Iran’s determination to acquire nuclear technology?

Specially at a time when their troops are pulling out of Afghanistan and need the safe passage through Pakistan, I think not.

Unfortunately the lobby in Washington, London and Brussels simply does not care for the genocide taking place in Pakistan. Nor London, Brussels or Washington will bear down on the Pakistani government or the military to put an end to the continued slaughter of Shias in Pakistan, nor speak a word of their continued oppression in Bahrain or elsewhere. Our governments are indifferent to the plight of communities on the rock, unless they have oil or other natural resources to offer.

In the grand game it seems the Shia community is expendable, and unless they butcher 6 million; as another extremist monster did another community 70 odd years ago no one will take note, or perhaps even then the condemnation will not go beyond words, perhaps 60 million might do it!

This would not be the first genocide that people of the rock choose to ignore whilst it happens, only to lament later.

The Genocide of Shias in Pakistan will only stop when the 99% realise that we; who occupy the rock are ‘a’ community and what affects one affects all, regardless of your creed, who your god is and which part of the rock you occupy.

The Shia community is sh!t out of luck, lets hope the extremists run out of bombs and bullets before this community runs out of innocents for them to kill. I wonder when there are none left will you remember the ones you knew as friends, neighbours, peers and colleagues once.

May your god be with you. I await my legion.