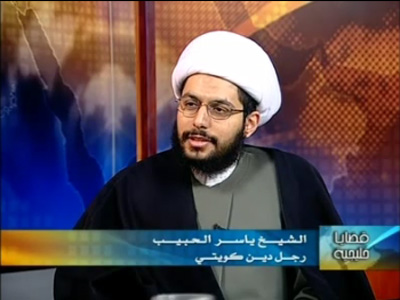 Recently a friend sent me a couple of links showing some Shia Muslims using hate speech against the first three caliphs of Islam. One of the video showed about fifteen to twenty people gathered at some place in the UK and abusing Hazrat Ayesha, a wife of the Prophet. I was shocked. Shias must say no to such hatemongers in their midst.

While these misguided, bigoted guys form a very small minority of Shias, the tall shadow of their actions falls on everyone in that community. In this age of information, their actions are filmed and propagated all over the world, including Pakistan. Denigrating the figures anyone has built one’s life and faith around is downright inhuman. More than anything else these chumps do significant harm to Shias, as because of their mindless acts and speech somebody gets killed in Parachinar or gets blown up in Quetta or is murdered elsewhere. By all ethical and human standards it is not right to speak insulting words — those words without social value, directed to a specific individual, that would provoke a reasonable member of the group about whose religious icon the words are spoken.

Don’t get me wrong. I am not naïve enough to think anger over religious insults alone can explain the violence against Shias. No, but these insults are indeed cleverly used by the Takfiri Deobandi-Wahhabi perpetrators to kick up the frenzy and to deprive their victims of general sympathy. There are some topics which can be discussed in a respectful and educated manner, when the context so demands, but we mast mark the line between a reasonable discussion and ignorant buffoonery. Such acts of buffoonery also create an environment that makes it more difficult for others to provide genuine critique. There is also a difference between sticking your own neck out for what you believe in and endangering other people. These guys mostly do it from safer confines and betray their people in regions which are so wrecked by war, poverty and oppression that many people feel they have nothing left but religion. And when that is desecrated, what do you have to lose by slaughtering a few?

What I know for a fact is that such rabid behaviour is not at all representative of Shias in Pakistan or elsewhere. While these lunatics are a fringe minority whose actions imperil millions of Shias, Shia stereotypes and those who unduly look up to Iran are also a small minority. Most of the Shias are quite ‘normal Pakistanis’ like most of the Sunnis. They are wedded to conspiracy theories. Their support of cricket team constitutes the most, and often sole, ardent manifestation of their patriotism. They too do not see any paradox in being avid fans of Indian movies and blaming India for all that is wrong with Pakistan. They also think that saying ‘Allah Hafiz’ instead of ‘Khuda Hafiz’ makes them a better Muslim.

What is also important to know is that about 90% of practising Shias in the world follow either Ayatollah Sistani (of Iraq) or Ayatollah Khamenei (of Iran), the two most important religious authorities at the moment. Both these leaders have issued religious decrees clearly and emphatically enjoining their followers to not to use any foul language for the first three caliphs of Islam and the wives of the Prophet. These injunctions clearly demonstrate how out of place the vicious speech is in a community that values the dignity of all. Hence, the people indulging in such foul behaviour do not represent any significant contemporary strand of thought in Shia theology and must be curbed.

Hence it is not surprising that such hate fomenting videos are often associated with people like Yasir Habib who have no association with the current authorities on jurisprudence in Shia school, like Ayatollah Sistani or Khamenai. Serious questions should be asked about the funding source of such hatemongers.However, even though such hate speech comes from isolated fringe elements, themselves despised by a majority of the Shias, we should not regard the harm as insignificant. The flared-up propagation of a few isolated incidents can have a disproportionate ­effect. Think about it. It’s always easier to defend someone’s right to say something with which you even remotely agree. But in a decent society and as a dignified human being, you also have a duty to defend speech to which you might strongly object if you were a neutral –let alone the aggrieved- party. Such speech doesn’t just impart incorrect information and stereotypes about Shias, but it makes the job of extremists much easier in targeting Shias by justifying apostatization, violence, and discrimination against them. Not only must Shias guard against an irresponsible minority of Shias stereotyping all Shias but they must also stop such people from starting forest fires with a match, which is then amply fuelled by apostatization and hate.

Shia history is, in particular, a record of important and dramatic events, with Karbala the most important one, which have often been profoundly affected by great speeches. Each era of Shia history boasts its own unique orators, people whose words have stood the test of time because their messages have proven to be both transcendent in meaning and indicative of the times in which they were spoken. Speeches in Shia community are not only a source of the remembrance of such events but they also serve as educational documents for scholars in later decades and centuries because they show what this segment of Muslim society was concerned about in a given period of time and how people expressed their views. Thus in Shia tradition, speeches illustrate the valued method of addressing important information to people. Orators –from Sheikh Sudooq to Allama Rasheed Turabi- historians regard as great are, at least in part, great because they knew how to reach the universal audience of their lifetime with the words and the narratives they employed. As the things have deteriorated in Pakistan and the extremism has become rifer, orators’ styles and content have also changed in manners that make oratory in Shia tradition now a declining art and learned people judge contemporary speakers unfavorably against the giants of the past like Rasheed Turabi. What is worse, however, is that a few of these orators resort to crass arguments and rabble-rousing in order to paper over their lack of knowledge and homework. I do hope that such speakers can take more seriously the damage such speech does, and to overcome the knee-jerk, impulsive, and thoughtless arguments that often characterize their speeches. They play in the hands of Takfiri extremists by abetting them in fanning hostility, violence, and discrimination against Shias in general.

TREAT HISTORY AS WHAT IT IS – HISTORY

As Iqbal said, Muslims have always been lost in the history and fighting over the past and even today I see hordes of young folks subscribing to different religious orders and accepting the man-made interpretations without question. In most cases the allegiance to sectarian schism is indelibly indoctrinated in early childhood. These sectarian doctrines have been constructed over centuries and are mostly mired in history.

In no religion in the history of mankind have such minor differences in fundamental beliefs led to so much mayhem and bloodshed. Instead, what human race continues to outgrow we keep on reliving. Burdened by an unpleasant and divisive history, sectarian harmony staggers under impossible difficulties as many Muslims find it more passionate and intense to delve in the narrations of history rather than coming together to use the basic tenets of Islam to deal with the modern challenges. However, in today’s world there is no reason that Muslims should remain locked in a theological and sectarian prison that justifies one sect’s adverse view of other sects within Islam. While all Muslims largely agree on the Quran, many of the sectarian differences have arisen merely because by the time of the formative period of Islamic law the Muslim society had become firmly sectarian and has remained so ever since. However, with modern insights about human nature and social and economic changes, the practice of religion has to adapt itself to the challenges of current world. After all, other beliefs also continue to evolve. For example, male monarchic rule was deeply embedded in the Muslim psyche and to question the rights of monarchs (as Khalifas or Sultans) to rule was almost unthinkable and was viewed as apostasy by a majority of the subjects. Today an increasingly wide majority of Muslims acknowledge that democracy is a better system than monarchy or Caliphate and their Islam is not any less devoted for so believing. So why must we remain mired in sectarian differences which are not relevant to the social, scientific, educational, and economic context of present times.

KARBALA – THE UNIFIER OF HUMANITY

Karbala, though, is not a matter of history. Occurrence of Karbala was not just an incident but a philosophy of life for the future generations and nations. Let’s use Karbala to its potential for transformation and unification. Message of Karbala is universal and transcends the human boundaries, and regions. It is independent of time bars and binds the entire humanity in a relationship of love. When Imam Hussain was left alone in the battle field, after all his brave companions and family members had been martyred, he raised a final call: “Hal min nasirin yansurna?” (‘Is there anyone who will come to our aid?’) This call was not bound by time, space, sect, religion or language. The Hussaini invitation stands. The question is; who amongst us is willing to respond with a resounding “Labbaika ya Hussain”, in our daily conduct and in response to all questions that life poses us?