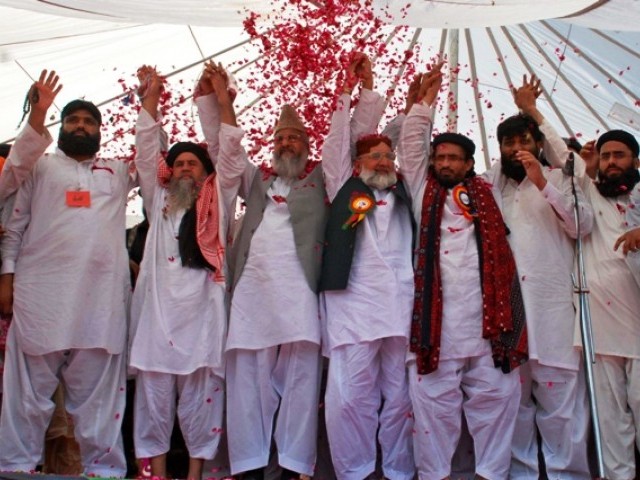 Stream of Shia blood continues to spill across Pakistan

Imagine a sight of a devastated father, sitting cross-legged on the road, in the dark and cold night, staring at the coffin of his only son, unmindful of the rain droplets mixing with copious tears, tricking down his sunken eyes.

What must be going through his mind when he shoulders the coffin of his young son and lowers him down into the grave?

A father brings up his children to help and support him in the autumn of his life. His hopes and dreams are pinned in his blooming buds. He yearns to see them grow and blossom, not to die so brutally. The most gargantuan test of father’s strength and fortitude is identifying the carcass of his slain son, when it is covered in heaps of dust and blood.

It brings to mind the horrifying images from Karbala, 1400 years after. It reminds one of Husain (as) and his young son Ali Akbar (as). But this is another Karbala, and another Ashura. More than hundred people were mowed down in cold blood on January 10 on Alamdar Road, Quetta, for being what they are: Hazara Shias. The ruthless persecution of minority Hazaras in Pakistan is an old story, which has for some strange reason never invoked outrage. Shias, declared as heretics by some self-anointed standard bearers of Islam in the ‘land of pure’ are being exterminated in targeted attacks.

And, the bloodletting continues unabated. On February 16, another powerful blast in a water tanker ripped through a crowded market on the outskirts of Quetta. The death toll has reached 84 (at the time of writing this), and hundreds are admitted to various hospitals in critical condition. Lashkar e Jhangvi ‘proudly’ claimed the responsibility for the attack. Instead of calling for military raids against the killers, government of Balochistan announced a day of mourning on Sunday (February 17) against the bombing incident.

Members of the Shia Hazara community, like on January 10 when they sat on the road for three days with coffins of their loved ones, refused to bury bodies of victims again this time, demanding that Army be called in to take control of the southwestern city.

The dance of death has been going on since a long time. Stream of blood is spilled in the streets, inside mosques, in processions, in hospitals and in schools. Iran-bound Shia pilgrims are offloaded from buses, lined up in open field and executed diabolically in front of their spouses and children. People participating in peaceful mourning processions are blown up in bomb blasts. Threatening text messages are circulated to warn Hazaras against coming out. Taliban governor of Mazar-e-Sharif issues a fatwa justifying the killing of Shias. Lashkar e Jhangvi, an offshoot of banned Sipah e Sahaba, vows to rid Pakistan of ‘unclean people’.

From Lahore to Quetta to Karachi to Peshawar to Hyderabad – innocents die, killers roam around freely, and law enforcement agencies stand in a paralyzed state. Merely 24 hours after the bloodiest attacks in Quetta, a venom-spewing leader of Lashkar e Jhangvi speaks, in a tone that betrays excitement, about the ‘fun’ he has in bloodbath of Hazara Shias. I don’t know if he is a father himself, but he must be a son of some father and some mother.

The exclusionary ideology propounded by these lumpen takfiri neo-khawarijes makes terrorism a legitimate activity. I am not an authority on religious affairs, but one fails to understand which brand of Islam gives them a license to trample on the blood of their fellow Muslims, and which verse of Holy Quran provides justification for such barbarism.

These ‘pious’ takfiri elements have declared ‘others’ as ‘apostates’ and taken it upon themselves to wipe them off. The ‘others’ include moderate Deobandis, Sunni Barelvis, Ahmedis and Christians, besides Hazara Shias. They have been found involved in many major acts of terrorism in Pakistan, such as the bombing of Marriott Hotel Islamabad on 20 September 2008, attack on Sri Lankan team in Lahore on 3 March 2009, attack on GHQ Rawalpindi on 10 October 2009, attacks on Sunni Barelvi and Deobandi mosques in Khyber-Pakhtunkhwa province, attacks on Ahmadis and Christians.

But, call it the brazen cowardice or complicity, nobody in the higher echelons of power musters courage to name the names and walk the talk. Even the media plays it safe, exercising a degree of caution and stopping short of calling these terrorists ‘takfiri deobandis’, rather employing wooly and ambiguous terms like ‘Sunni extremists’. Such terminology deceptively lends it sectarian colour and projects it as some political or religious confrontation between Shias and Sunnis. In essence, it is Takfiri Deobandis versus the rest. Many Sunni Barelvi and moderate Deobandis in Pakistan have distanced themselves from these hate-mongering Takfiri Deobandis.

It is important to make a clear distinction between moderate Deobandis and takfiri Deobandis, because even moderate Deobandis have been the targets. On 30 May 2004, a prominent Deobandi cleric, Mufti Nizamuddin Shamzai was gunned down while leaving his home in Karachi. On 17 September 2007, Maulana Hasan Jan was shot dead in Peshawar. On 19 September 2008, a bomb exploded at an Islamic seminary school in Quetta, run by Jamiat Ulema e Islam, resulting in five casualties. Sunni Barelvis have also faced the music at the hands of these ISI-backed and Saudi-financed neo-khawarije terrorists, like the attack on Data Darbar Lahore, attack on Jhal Magsi Balochistan, attack on Bari Imam Islamabad, attack on Rehman Baba Shrine Peshawar, attack on Abdullah Shah Ghazi Karachi, and attack on Nishtar Park on Eid e Milad celebrations in Karachi.

The itchy question rattling the minds of all and sundry these days is: Who are these takfiri Deobandis on rampage in Pakistan. They are the foot soldiers affiliated to Lashkar e Jhangvi (LeJ), an offshoot of Sipah-e-Sahaba Pakistan (re-christened as Ahle Sunnat Wal Jamaat). They represent a minuscule minority of Deobandi sect, with mentality of anarchism and chaos and dangerously extremist stance towards their fellow Muslims (from other sects) and non-Muslims. Sipah-e-Sahaba Pakistan (SSP), despite being banned in 2002 as a terrorist organization under Anti-Terrorism Act of 1997, carries on its terrorist-sectarian activities camouflaged as ‘Ahle Sunnat Wal Jamaat’ (ASWJ).

They have vowed to carry forward the legacy of Yazeed, who killed Husain (as), the beloved grandson of Prophet Mohammad (PBUH), in desert plains of Karbala Iraq 1400 years back. Yazeed was also a Muslim, and his interpretation of Islam was no different from these self-anointed defenders of faith. The unremitting bloodshed of Shias in Pakistan has to be seen in the context of fatwa (decree) issued by Darul Uloom Deoband, the highest seat of learning for Deobandi sect, in support of Yazeed, who is otherwise cursed by all Muslims, cutting across sects.

Now, these neo-khawarijes, the leaders of extremist groups like Lashkar e Jhangvi (LeJ), Sipah e Sahaba Pakistan (SSP), and Tehreek e Taliban Pakistan (TTP), are carrying the ‘mission’ of their forefathers forward. Their task is cut out: to wipe off Shias and moderate Sunnis, and establish the rule of God on earth (only God knows what rule that is).

Some sections of media and general public in Pakistan do condemn the barbarism of these fringe extremist groups against Hazara Shias and other minorities, but they do so passively, almost reluctantly. Not many would dare to call killers by their name or by the name of their organisation. Those who did paid with their lives. The ruling Pakistan Political Party is inept and corrupt. Opposition PML-N overtly mollycoddles these groups and leaders from both are seen rubbing shoulders during election campaigns. Imran Khan’s Pakistan Tehreek e Insaaf is playing it safe, with an eye on upcoming elections. The only two warhorses who mince no words in calling spade a spade are Tahir ul Qadri of Pakistan Awami Tehreek and Altaf Husain of Muttahida Quami Movement, perhaps because they are both non-residents, one with Canadian citizenship and other with British citizenship.

All the state institutions – government, army, and judiciary – have failed to protect minorities in Pakistan. Judiciary, seen as largely free of government and army control, takes suo moto notice of the murder of Shahzeb Khan (killed by some feudal lords); but it bails out the terrorists of LeJ, SSP and TTP, because of the lack of ‘sufficient evidence’. And the same terrorists come out and ruthlessly butcher Hazara Shias in Quetta.

The Chief Justice of Pakistan takes personal interest in the case of Shahzeb Khan (rightly so), but over a hundred murders of Hazara Shias under broad daylight on a single day fail to stir and shake him. The murder of Iran-bound Hazara pilgrims is not considered a fit case for suo moto notice. The murder of 13 year old Mehzar Zehra’s father is yet another statistic. Mehzar, who was also shot, is battling for her life on a hospital bed. What, and more importantly, who stops him from taking suo moto notice of the Shia killings in Quetta, Karachi, and Lahore? What prevents the intelligence agencies in Pakistan from collecting ‘sufficient evidence’ against the terrorists belonging to LeJ, SSP, and TTP? Where does the buck stop? Well, if you put yourself in the shoes of the bereaved father who sat on the road besides the coffin of his slain son on that rainy night, crying and wailing inconsolably, you will perhaps get the answer.

Syed Zafar Mehdi is a Kashmiri journalist, activist and blogger based in New Delhi.