After the horrendous bomb attack in Quetta on Shia Hazaras on Saturday, there is little doubt left in the hearts and minds of all Pakistanis that we are now facing genocide in Pakistan where 20 percent of the population is being targeted for its faith. The attack was once again claimed by banned Sunni extremist group Lashkar-e-Jhangvi (LeJ), which seems to relish the deaths of more than 80 Shias in one swoop. The helpless relatives of those who died at the hands of these radical savages have, once again, taken their protest to the highest authorities in the government, refusing to bury the corpses of their loved ones unless action is taken. The Hazaras held a demonstration like this previously after the January 10, 2013 bombing, which killed some 100 people. Their demands were met to some extent when the incompetent provincial government was replaced by Governor’s rule but, if this latest episode is anything to go by, nothing seems to have changed in the restive province of Balochistan. The Hazaras seem to have understood this and are now demanding that Governor’s rule be replaced by a military takeover so that the culprits are arrested. Whilst one understands their frustration and anger, one feels compelled to caution this extremely vulnerable and heartbroken minority.

When Governor’s rule was imposed about a month ago, the paramilitary Frontier Corps (FC) was given police powers, but that has not helped either. What is more, the FC is strongly suspected of being a major player in the violence that has plagued the province, accused by many as having a huge role in the missing persons matter. Far from being part of the solution, this demand for an army takeover may turn out to be part of the problem. Where do the Hazaras turn? So far, the federal government, which now is in charge in the province after the imposition of Governor’s rule, has proved its negligence when it comes to addressing this issue. The federal government must get its head out of the sand to prove that it is not totally powerless. The government must start ensuring that the intelligence agencies start doing their job. In a small city like Quetta, how can no one know what is going on? To prove that the sectarian monster is not confined to the Hazaras alone, a renowned doctor, Dr Haider Ali, and his 11 year-old son were shot dead in Lahore on Monday morning in what appears to be another sectarian killing. The doctor was Shia. This is a steady genocide, and to ignore it and stay silent is a crime in itself.

The military has the answer

The entire country is in mourning over the killing of over 80 innocent Hazara Shias on Saturday in Quetta. Angry protests are being held across the country demanding the arrest of the accused through a targeted operation. The genocide of the Hazara Shia has even broken the silence of leaders like Imran Khan, billed as soft on Islamist-cum-terrorist organisations like Lashkar-e-Jhangvi (LeJ). Terming the outfit un-Islamic, Imran has demanded of the government to arrest the culprits. The Supreme Court (SC) in its suo motu notice of the killings has asked the government to crack down on the group claiming responsibility. The Human Rights Commission of Pakistan has criticised the failure of the government to take action against LeJ so far. The atrocity in Quetta is not new. The group claiming responsibility is not new either. The situation, where the relatives are sitting with the corpses of their dead, refusing to bury them unless the culprits are punished, is a repetition of the Alamdar Road incident when a twin blast killed even more Hazara Shias then as on Kirani Road now. The promise held out by the government to take control of the situation is also not new. Politicians blaming the intelligence agencies and vice versa is a time tested technique to shy away from accepting responsibility.

The problem is not that difficult to comprehend. The culprits have been admitting their claim of killing Hazara Shias and are living among us freely. Malik Ishaq, the leader of the LeJ, moves around without fear of retribution. Those who say that Quetta should be handed over to the military are perhaps naive enough not to know that it is already the military calling the shots there through the Frontier Corps (FC). Nothing, not even a leaf can stir without the consent of the military in Balochistan. The FC having been given police powers after Governor’s rule was imposed, has clearly failed to deliver anything positive. This is the very force responsible for the brutal elimination of nationalists in the province; an accusation proved beyond an iota of doubt by even the SC. This being the lay of the land, why is the military not taking the onus? Why is it silent, seeing the government taking all the heat of the protest staged across the country over the repeated killing of Hazara Shias in Quetta? Even if the entire police force were removed, as the Inspector General of Balochistan is replaced along with other officers, Quetta would still reverberate with death tolls, because of trying to solve the problem in the wrong way. It is tantamount to helping the FC evade its responsibilities. The removal of the incompetent previous government of Balochistan after the Alamdar Road massacre last month has brought little if any change in the government’s inability to control the deteriorating situation in Quetta. The dark night has already descended on the Hazara. The message could not have been clearer. Eight hundred kilograms of explosive was used, making Saturday’s bombing the biggest attack in Quetta’s history. If this is not enough, what are we waiting for before getting down to the business of purging this country of the jihadi monsters we used in yesteryears as proxies?

Who can know how best to handle its creation than the creator? It is the military, and none else, who can suppress this jihadi phenomenon. Thanks to our negligence or complacency, the extremists are equipped with the latest weaponry. The silence in certain quarters is feeding into the conspiracy theory that things are being allowed deliberately to deteriorate. Are we into some sort of systematic eradication of minorities in the country, more so Shias? This is what the killing of Shias in Karachi and Lahore too depicts. As far as Balochistan is concerned, the military establishment first, and then the government, owes an explanation to the people of the country.

The insanity prevailing in Pakistan over exterminating Shias comprising 20 percent of the population is an indication of a decaying nation. Lashkar-e-Jhangvi, claiming responsibility for the attacks, are not being apprehended, including its leader Malik Ishaq, who after serving 14 years in what would be a comfortable jail is basking in the sun and not even being questioned about his group’s activities. Arresting 170 suspects for their involvement in the February 16 genocide of Shias in Quetta is already being seen by some quarters as just responding to the pressure by going through the motions. However, even if one accepts the attempt as genuine, the question follows, why did it take the government so long to do even this much? The relatives of the martyrs of Hazara Town blast had refused to bury their loved ones unless Quetta was handed over to the army and a targeted operation was carried out against the perpetrators. Though giving the army the mandate to restore law and order in the province was not entertained, an operation against the criminals was immediately initiated on the instructions of Prime Minister Raja Pervez Ashraf. Four accused were killed in an overnight raid, while seven alleged hardcore jihadis were arrested. According to the police report, those who were killed included the mastermind of both the Alamdar and Kinari Road attacks. The operation had initially failed to sooth the wounds of the Hazaras, who were reluctant to bury their relatives unless the army was called in, yet they lowered the bodies of their martyred into the ground with the hope that their blood would not go waste. One truly desires from the government that this hope would not be allowed to turn into despair once again. The arrest of the alleged culprits indicates that the law enforcement agencies are capable of doing their job. It could also show that supported by political will, they could deliver results as well.

It is this political will that has come under the scrutiny of the Supreme Court (SC) hearing the case on the suo motu notice it had taken on the killing of the Hazara Shias. The report presented in the court by the ISI chief that failed to impress the judges, had laid the entire burden on the civilian administration that according to the report had failed to maintain law and order in Balochistan. To the judges it was the absence of the collective effort required from the security, intelligence and law enforcement agencies that mattered. The officers of a country plunged in terrorism cannot get away with shifting blame. It is in this very context that the SC had gone as far as indicating the possibility of summoning the PM to the court if the defence and interior ministries fail to reveal where the problem lies. How could the raw material of a high intensity explosive pass through security checks from Lahore to play havoc in Hazara Town, Quetta, is a question worth asking. Even in normal circumstances such security lapses cannot be tolerated, but especially in today’s Pakistan, which is literally burning.

Parliament is all set to quiz the chiefs of the intelligence agencies next week to find out the reasons for their laxity. This joint sitting of parliament should be made an occasion for soul searching. The result of this sitting should be an admission of the failure of all those who have been entrusted the job of preserving the lives and property of the citizens. If Rehman Malik had been confident that there would be multiple blasts in the country, as he is reported to have said, why was no action taken on this intelligence? People deserve answers to these questions. And it is in these answers that the recipe for Pakistan’s stability lies. 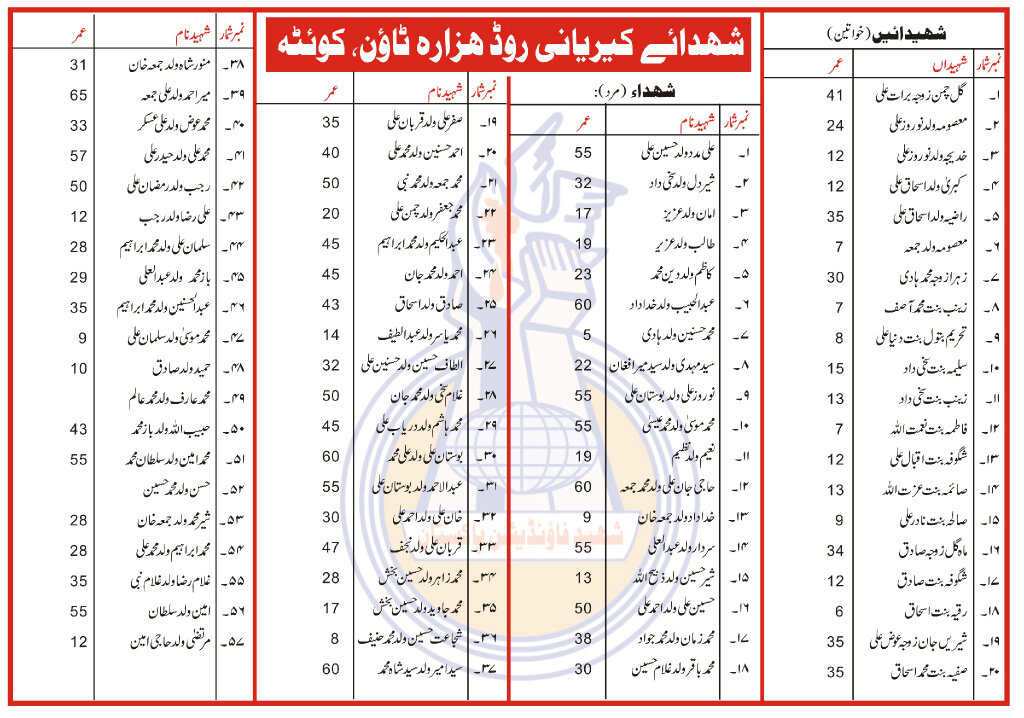