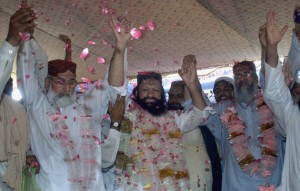 ISLAM NAGAR, Pakistan (AP) — The deal saw one of Pakistan’s most feared militants walk from jail apparently in exchange for his commitment to nonviolence, help in reining in other fighters and possibly delivering the votes of his followers.

Supporters showered Malik Ishaq with rose petals when he left the prison in the eastern city of Lahore in July. Days later, he was preaching murderous hatred toward minority Shiites to crowds of cheering Sunnis, energizing a network whose members have joined al-Qaida for terror strikes. That was too much for Pakistani authorities, who arrested him again last month.

Pakistan has a well-documented history of trying to coopt or strike deals with militants of various causes, and a close examination of the Ishaq case shows how that can play out.

It’s a cautionary tale, perhaps, for U.S. officials who are urging Pakistan to bring to the negotiating table Afghan militants who enjoy safe havens in the country’s lawless border regions.

Fifteen years ago, Ishaq founded Laskhar-e-Jangvi, or LeJ, which allies itself with al-Qaida and the Taliban. The LeJ is blamed for scores of attacks on Shiites, regarded as infidels, and on Pakistani and U.S. interests.

Ishaq was arrested in 1997 and accused in more than 200 criminal cases including the killings of 70 Shiites.

But the state could never make the charges stick — in large part because witnesses, judges and prosecutors were too scared to convict.

Frightened judges treated him honorably in court and gave him tea and cookies, according to Anis Haider Naqvi, a prosecution witness in two cases against Ishaq. One judge attempted to hide his face with his hands, but Ishaq made clear he knew his identity in a chilling way: He read out the names of his children, and the judge abandoned the trial, he said.

Despite the lack of convictions, Ishaq remained in prison for 14 years as prosecutors slowly moved from one case to the next.

Ishaq proved his usefulness to the army in 2009, when he was flown from jail to negotiate with militants who had stormed part of the military headquarters in Rawalpindi and were holding hostages there, said Hafiz Tahir Ashrafi, who used to advise the Punjab provincial government on religious matters.

A behind-the-scenes effort by the government to co-opt the leaders of militant outfits and bring them into mainstream political life, or at least draw them away from attacking the state, helped Ishaq secure his July 15 release, according to Ashrafi.

“I met Ishaq several times in prison,” Ashrafi said, emphasizing that Ishaq assured him that he wanted to contribute to peace. “If someone wants to get back to normal life, yes, why not, we do help him,” said Ashrafi. “These are our own men.” He said he was disappointed to see him back in jail.

Punjab law minister Rana Sanaullah Khan denied there was any deal behind Ishaq’s release, but said extremist leaders were free to join politics if they eschewed violence. “We are in touch with those who have become, or want to become, useful citizens,” he said.

The Punjab is the key battleground between the ruling party of President Asif Ali Zardari and the party of opposition leader Nawaz Sharif, currently in power in that province.

Maulana Ahmad Ludhianvi, the head of Sipah-e-Sahaba Pakistan, or SSP, LeJ’s parent sectarian group, told a rally last year that Nawaz’s brother, Punjab chief minister Shahbaz Sharif, had promised that Ishaq’s release “would be settled in meetings” with him.

“After that meeting, the time is not far when the prison door would break open and Malik Ishaq would be released,” he said.

LeJ and other militant groups can muster significant support in Punjab and parts of Sindh province through their schools and mosques, making them an important political force. Mainstream politicians have shown no hesitation in courting them despite their links to violence.

“That is what Zardari’s party and Sharif’s know very well,” he said.

Khaled Ahmad, an expert on Pakistani militant groups in Punjab, said there is “no doubt” that the SSP and Sharif’s party would cut deals as they have done in the past. “It is dangerous now because the group and its offshoots are in alliance with al-Qaida.”

Government intelligence reports obtained by The Associated Press show Ishaq made threats in his public appearances after his release from prison.

He urged his supporters not to be afraid of Pakistani laws or prisons, and told them to “get on the streets and crush publicly the Shiites who abuse the Prophet Muhammad’s companions.”

“We know how to kill and how to die,” he told a gathering near Rahim Yar Khan on Sept. 4, according to one report.

Ishaq’s aides denied he made such remarks.

The government suspected Ishaq of coordinating meetings in recent months of 50 or so alleged terrorists, said Khan, the law minister. Some of the men Ishaq visited directly after his release had allegedly been involved in terrorism and were being watched by law enforcement and intelligence agencies, said the government reports.

LeJ’s stronghold is south and central Punjab, a neglected, blisteringly hot part of the country that has long been the recruiting ground for state-sanctioned jihadi groups. Wealthy families, disproportionately Shiite, own large swaths of land where tenant farmers grow cotton, sugarcane and wheat and work at mango orchids.

Visitors to Ishaq’s house in Islam Nagar in the southern Punjabi city of Rahim Yar Khan are greeted by an SSP member with an automatic rifle, against a backdrop of flags and banners glorifying the group.

“My father’s mission is a true one,” said his son, Malik Usman. “We will seek our reward from Allah.”