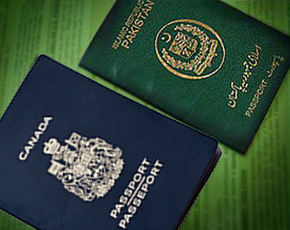 Dual citizens can help restore the Chief Justice to his office, but they are not permitted to question the makeup of Pakistan’s election commission.

While hearing a petition by Dr. Tahirul Qadri, who is a dual citizen of Canada and Pakistan, the Chief Justice of Pakistan, Honourable Justice Iftikhar Muhammad Chaudhry, questioned the very loyalty of Pakistanis who have settled abroad and have become citizens of other countries. “How can somebody who takes an oath of allegiance to another country be loyal to Pakistan?” the Chief Justice remarked last Monday.

I wonder if the honourable Chief Justice would have questioned the loyalty, motives, and locus standi of the thousands of Pakistani expatriates who joined his struggle for an independent judiciary in Pakistan. The two-year movement for independent judiciary started in March 2007 when the military dictator General Musharraf removed Chief Justice Iftikhar Chaudhry from his office and ended with his reinstatement in March 2009. The movement galvanised not only the Pakistani lawyers, but thousands of Pakistani expatriates. Some of those dual citizens left their families abroad to be with the Chief Justice in Pakistan to join him and the rest of the nation in the quest for an independent judiciary. I don’t recall the honourable Chief Justice ever questioning the loyalty of the dual citizens who came in droves to his support.

Expatriates of the world unite

One of the inescapable consequences of globalisation is the mobility of capital and labour across national borders and continents. It is not just the containers stuffed with goods being shipped from one corner of the world to another that has been the hallmark of globalisation. Globalisation has resulted in millions of workers leaving their countries of birth to search for jobs in foreign lands. This has created a new global class of workers who have assumed nationalities of their adopted homes, wherever they were permitted to do so, but have, at the same time, not severed ties with their countries of birth where their families and memories continue to reside.

This new class of globalised skilled and unskilled workers remits over $500 billion annually to their countries of birth to support the social safety net, which in countries like Pakistan are either missing or not strong enough to catch most of those falling into abysmal poverty. The World Bank recently reportedthat developing countries would receive over $400 billion in remittances from expatriate workers. While India, China, and the Philippines are the largest recipients of remittances, other countries including Tajikstan, Liberia, and Lebanon, despite smaller remittance amounts, rely even more on remittances because of the small domestic economic base.

In an earlier piece that appeared in the same space, I have argued for a greater political role for Pakistani expatriates who remitted nearly $14 billion to Pakistan in 2012. I based my assertion on the fact that remittances accounted for 7 per cent of the Pakistani GDP in 2011, whereas the entire tax collection accounted for a mere 10 per cent in Pakistan. Why would Pakistan deny a voice to those who may not live physically in the country, but their financial support is prompting the consumer spending and maintaining the social safety nets. I wrote:

“While the government is severely constrained in its ability to assist the needy, the expatriates subsidise the maintenance of a broken social safety net in Pakistan. In most instances, remittances pay for rents, medicines, grocery bills, marriage expenses and other similar needs of low-income households who are unlikely to receive any meaningful support from the government. Similarly, remittances pay for tuition fees for children who would not be educated otherwise because of missing or inadequate public sector schools. The remittances therefore, plug the gap in social spending in Pakistan.”

Globally, remittances have by far exceeded the amounts doled out as official development assistance. Even with a much smaller cash outlay to Pakistan than remittances, the IMF and the World Bank assert huge pressure on Pakistan and dictate changes to Pakistan’s domestic policies; recall the structural adjustment programs.  The Supreme Court of Pakistan, however, has not raised concerns about the IMF and the World Bank dictating their terms to the State. In comparison, the expats, who have sent $14 billion in 2012 to Pakistan, have to now prove their loyalty to Pakistan.

What I find disturbing in Pakistan is the approach of the courts that have started to question the loyalties of Pakistanis who hold dual citizenships. Recently, it started with the superior courts questioning the loyalty of the former ambassador of Pakistan to the United States, Mr. Husain Haqqani (who holds only Pakistani citizenship), and then followed with the disqualification of legislators who held dual citizenships.

I am amenable to the idea that dual citizens may not be allowed to hold public office. What I find extremely disturbing is the notion, now supported by the Supreme Court, that dual citizens may not be loyal to their country of birth. I wonder if the honourable Chief Justice realises the implications of his assertions. If the country of birth cannot trust the loyalty of dual citizens, why should the adopted country trust the dual citizens? Such an approach would effectively create a class of bastard citizens whose loyalty will be doubted by both home and adopted countries. This may happen even when both the adopted homeland and the country of birth continue to benefit from the toils of these hard workers.

There has been a sordid history of questioning the loyalty of dual citizens.  Earlier in 1949, the US Ambassador to Germany, George Bancroft, criticised such a notion when he asserted that “as soon tolerate a man with two wives as a man with two countries; as soon bear with polygamy as that state of double allegiance which common sense so repudiates that it has not even coined a word to express it.” (David Leblang, 2011).

Much has changed in the past six decades since Ambassador Bancroft expressed his utter disgust with the very idea of dual citizenships. In fact, the negative population growth rates in Europe have made Europeans increasingly dependent on immigrant workers, some of whom embrace dual citizenships. According to David Leblang, the number of countries offering dual citizenship had increased to 84 in 2006. This has certainly benefitted the countries of birth since a simultaneous increased in the share of remittances has also been observed globally.

The Pakistani-Canadian, Dr. Tahirul Qadri, must have taken the following oath of citizenship:

“I swear (or affirm) that I will be faithful and bear true allegiance to Her Majesty Queen Elizabeth the Second, Queen of Canada, Her Heirs and Successors, and that I will faithfully observe the laws of Canada and fulfill my duties as a Canadian citizen.”

Now, here is an interesting twist. Dr. Qadri has not taken “an oath of allegiance to another country” as was suggested by the honourable Chief Justice, but instead has pledged to bear true allegiance to Her Majesty, Queen Elizabeth the second. May I remind the readers that while Dr. Qadri has pledged allegiance to Queen Elizabeth and her heirs, many a founding fathers and mothers of Pakistan had pledged similar allegiances to Queen’s father and grandfather. Did we ever question the loyalty of those who served the British Raj before they served the land of the pure?

I too am a Canadian citizen who was born in Pakistan. What I have learnt from faithfully observing the laws of Canada is a strong belief in equity, social justice and human rights. The Canadian Charter of Rights and Freedoms, which is entrenched in the Constitution, promises (among others) the right to life, liberty, and security of the person. Why would adhering to such a noble commitment make me or anyone else disloyal to Pakistan or to this planet?

Murtaza Haider, Ph.D. is the Associate Dean of research and graduate programs at the Ted Rogers School of Management at Ryerson University in Toronto. He can be reached by email at murtaza.haider@ryerson.ca