The response of the Swiss authorities in their refusal to open cases in their courts raises the question that if the letter was infructuous, why was an elected prime minister of Pakistan sacked? 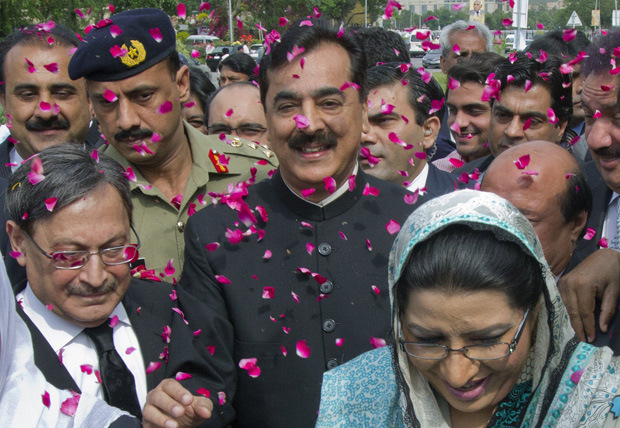 The Swiss authorities have eventually responded to the letter written by the Pakistan government on the command of the Supreme Court (SC) that cases against the president cannot be reopened in their courts. This is what the federal government was trying to convince the SC of the last many years that the president, under national and international laws, enjoys full immunity. Therefore, writing a letter to the Swiss authorities, requesting them to reopen the cases against the president in their courts, was against the law and not disobedience of the SC orders.

Shaheed Benazir Bhutto on an occasion said, “One of the most unfortunate aspects is the Swiss government’s role. By accepting the request of the Nawaz regime against the Leader of the Opposition, the present Swiss regime took sides in a partisan political battle.” Commenting on accountability, she used to say, “There is a difference between the process of accountability and policies of revenge. Accountability applies equally to elected representatives of the people on both sides in the National Assembly. Politics of revenge applies only to the members of the Opposition. The process of accountability is conducted by a non-partisan office whereas policies of revenge lie at the heart of the prime minister’s secretariat. Accountability is achieved through the use of the judicial process. Revenge is sought through abuse of the judicial process.”

We do know that the Swiss action was triggered by the false Pakistani claims that two Swiss companies had been illegally awarded a contract for pre-shipment.

Unlike today, the then PM’s secretariat of Mian Nawaz Sharif was the centre of conspiracies against the PPP and opposition, where Saifur Rehman was assigned the duty of hatching conspiracies and plotting bogus cases against Shaheed Benazir Bhutto and Asif Ali Zardari. They left no stone unturned in defaming them and the PPP. As a result, much harm was inflicted on PPP’s and Mr Zardari’s reputation. Later, Saifur Rehman asked for Mr Zardari’s forgiveness in the presence of his mother and a renowned Urdu columnist and a talk show host. Not only he, even Mr Sharif, just before signing the CoD, had accepted that all cases against Shaheed Bibi during his rule were politically motivated and fabricated.

Aitzaz Ahsan, the renowned lawyer and leader of the movement for the restoration of the judiciary, who defended the former Prime Minister (PM) Yousaf Raza Gilani in the SC in the contempt of court case, vehemently tried to convince the court that the PM was obeying the constitution, rather than defying the orders of the SC by not writing to the Swiss courts. It was not only against the national/international laws but also against the integrity of Pakistan to send the president to a foreign magistrate’s court. The SC, nonetheless, ignored all logical arguments put forward by the lawyers, the Attorney General, as well as by the then PM, who appeared in the SC in the case of the NRO implementation more than once.

However, the SC dismissed an elected PM and disqualified him for not writing to foreign authorities against the elected president of our own country, albeit immunity is guaranteed under the constitution of Pakistan and the Vienna Convention. The SC, criminal and accountability courts of Pakistan, accept immunity for the president under the Vienna Convention 1961 and 1963.

In this decision of not writing the letter to the Swiss courts against the president, the PPP was not alone and was fully supported by all democratic political parties sitting on the treasury benches. It is obvious that the majority of the PPP leaders and workers believed that the government should not write a letter to the Swiss authorities requesting the reopening of the graft cases against President Zardari. The PPP strongly believed this to be a tactic aimed at derailing democracy in Pakistan, restored after long drawn efforts and sacrifices by its leadership and workers against dictatorship. At the same time, after sacking Mr Gilani, they knew that consecutive sacking of prime ministers would not only destabilise democracy but would also infuriate political workers to agitate against the judiciary. The PPP never wanted demoralisation and destabilisation of any national institution, thus, following the greater policy of reconciliation, it decided to write the letter.

Will the SC order the restoration of Mr Gilani and would it review his disqualification? Will it be cognizant in future in giving verdicts on pending cases registered against the PPP for the purpose of victimisation? After the Swiss response, will it not be remembered as another chapter of judicial activism in our history? That history is already abysmal as far as delivering justice to the PPP and the Bhuttos is concerned. We know Shaheed Z A Bhutto was judicially murdered and yet this case is pending in the SC. Shaheed Benazir Bhutto spent her whole life in search of justice in Pakistani courts from Peshawar to Karachi but never received it. President Zardari unjustly spent more than a decade of his life in jails without being convicted in cases that remained unproven.

It is known that when President Zardari took over the reins of government, Pakistan was confronted with a judiciary crisis. As a democrat, he did not seek to eliminate his rivals. He had confidence in his own power base established through the vote of the Pakistani nation. He buried the politics of revenge, strengthened democracy through the politics of reconciliation, brought arch rival political parties to the same table and throughout the country none was sent to jail merely for the sake of political victimisation. The judiciary was passing through phases of crises and destabilisation but through wisdom, he restored everything to normalcy.

One wonders why the Swiss case has received so much publicity. Today, for every sane person, it is no more than a politically motivated fictitious case through which the then PM Mr Sharif tried to eliminate the PPP and defame its leadership. The PPP does not, however, subscribe to the disease of nailing political opponents on fictitious charges through dubious means of torture, perjury, imprisonment, coercion and forgery. Unfortunately, this practice began in 1948 and has since been adopted by the heirs of dictators against the popular liberal, democratic forces of the country and the judiciary has always abetted such elements.

A great deal of public time has already been wasted on such false cases aimed at defaming political opponents; most of the PPP’s life is being wasted in the courts. Now let the democratic governments work for the well being of the public and for the purpose they were elected.

The writer is a citizen of the tribal areas and an expert on FATA. He can be reached on analystoori@gmail.com and on twitter @RiazToori