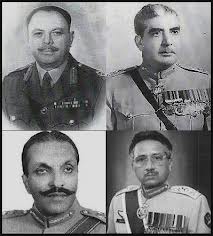 Anyone with even a slight grasp of Pakistan’s political history knows that whenever the political scene starts turning sour, our search for a new face begins. Doubts and ambiguity about our future become a platform for attention-seekers who do nothing but fool the awam into believing that they are the next best messiahs, and accordingly,will be able to bring to fruition the Utopian visions and values everyone craves for.

Let us jog our memories and recallour first such savior; Field Marshal Ayub Khan. On October 7, 1958, President Iskander Mirza abrogated the constitution and declared martial law in the country (http://zeenews.india.com/PervezMusharraf/story.aspx?aid=424823). This was the first of many military regimes to follow that would wreak havoc on Pakistan’s cause for sustained democracy. As with all martial laws, the constitution of 1956 was abrogated, ministers were dismissed and all assemblies were dissolved. Any kind of political activity in the state was also forbidden. As soon as martial law was declared, the then commander-in-chief of armed forces, General Muhammad Ayub Khan, became the chief martial law administrator. The reason put forth for such a move was ‘incompetency and corruption’ of politicians. Ironically, these same reasons along with pressure from opposition alliance of Maulana Bhushani and Zulfiqar Ali Bhutto were the reason that Ayub Khan on 25th of March 1969 handed over control of Pakistan to his commander-in-chief General Yahya Khan.

While this military regime did give a slight appearance of stability and the impression of development, it is important to remember that not only did Ayub Khan’s authoritarian regime mange to deepen social inequalities resulting in an increasingly greater divide between the rich and the poor, but 5 million people fell below the poverty line as well (http://www.yespakistan.com/economy/growthpoverty.asp). Ayub Khan is also criticized for ignoring to address the significant economic disparity between East and West Pakistan of the time. This reign would last for roughly 10 years when Field Marshal Ayub Khan would hand over charge to General Yahya amid increasing pressure and popular public resentment.

This brings us to to his successor and our second ‘messiah’General Agha Muhammad Yahya Khan. He was the second military dictator of Pakistan from 25th March 1969 until the 20thDecember 1971 when he handed over power to Zulfikar Ali Bhutto (http://storyofpakistan.com/yahya-khan/). General Yahya Khan assumed powers after Pakistan had fallen into a state of disarray and immediately after coming to power, he declared martial law in the country and proclaimed the title of Chief Martial Law Administrator. As with all martial laws, he mulled the constitution and dissolved all assemblies. Less than a week later, he also became the president of Pakistan.

Even though General Yahya Khan can be credited with creating a framework and then arranging for the country’s first general elections held in December 1970, he never addressed the brewing acute grievances of East Pakistan. In fact, he did quite the opposite. Post-elections he initiated Operation Searchlight, a crack down to restore the government’s power that turned ugly and into an outright civil war between Pakistan Army and Bangladesh Liberation Forces. This crackdown formed the basis for a long and bloody liberation war for the Bangladeshis eventually extending into the Indo-Pakistani war of 1971 and ultimately the creation of an independent republic called Bangladesh. The scars of those wounds have yet to heal (http://tribune.com.pk/story/463357/bangladesh-seeks-pakistan-apology-for-1971-war-crimes/) and are still visible between the two nations.

While Pakistan was still recovering from the 1971 fiasco and its geo-political after-effects, we turned our eyes to yet another savior, a four-star General and Pakistan’s third military dictator by the name of Zia-ul-Haq. Prime Minister Bhutto began facing considerable criticism and increasing unpopularity as his term had started progressing. United Democratic Front, a common platform for opposition parties was created soon after he took office. The same opposition decided to join hands against Bhutto and contest the election, which was announced to be held in 1977, from a common platform called the Pakistan National Alliance (PNA). When PPP swept the polls in election held in March of 1977, PNA leadership did not accept the results and accused the government of systematic rigging. Bhutto put a deaf ear to these allegations but later agreed to hold elections in 1977 amid disarray and tumultuous political and national conditions.It was then when the COAS of the time, General Zia-ul-Haq, imposed Martial Law in the country on July 5, 1977, and sent Bhutto to jail.

There is a long list of criticisms against Zia’s tyrannical and religion infused reign over Pakistan that lasted for almost a decade. His military government portrayed the coup as a spontaneous response to a difficult situation” but his response was a complete contradiction when in an interview General Zia said, “Had an agreement reached between the opposition and the Government, I would certainly never have done what I did” (http://www.amazon.com/Pakistan-Between-Military-Husain-Haqqani/dp/0870032143). Zia’s policies are cited as root cause for bitter religious differences and ethnic divides and are also held responsible for civil liberties of awam being thrown out the window. His legacy was also described as “the most enduring, toxic and tamper-proof”  (http://dawn.com/2012/07/07/zias-long-shadow/). However his most enduring “gift” to the people of Pakistan was his indirect involvement in regional matters by means of proxy (http://elections.com.pk/candidatedetails.php?id=6887), something that has come back to haunt us in the shape of recent insurgency and rise in terrorism in the name of religion (http://www.foxnews.com/world/2010/04/28/terror-attacks-decline-globally-rise-afghanistan-pakistan/).

Fast forward a few years and we have another dictator coming up via a coup. Nawaz Sharif, in 1999, had fired Chief of Army Staff General Pervez Musharraf Tuesday afternoon and hours later the army struck back with a coup. At 2:50 am Gen. Musharraf, in a very ‘patriotic’ and earnest tone addressed the nation on Pakistan Television (PTV), the state television saying that the army had overthrown Nawaz Sharif’s democratically elected government “to stop any further politicization or destabilization of the military”(http://www.nytimes.com/1999/10/13/world/coup-pakistan-overview-pakistan-army-seizes-power-hours-after-prime-minister.html?ref=pervezmusharraf).

By August of 2007, polls showed Pakistanis did not want another Musharraf term.Musharraf was also becoming increasingly unpopular and controversies involving Operation Silence (pertaining to Lal Masjid), emergency rule of 2007, war on terror, criticism from rival political leaders asking for impeachment, and most important of them all, his suspension of the famous Chief Justice of Pakistan Iftikhar Hussain were now coming to haunt him. His image in public and political circles was becoming tainted (http://www.economist.com/node/9622079?story_id=9622079) and thus on Aug 18th 2008, Musharraf resigned.

The current Pakistani government will be the only government that completes its full democratic term.  While there has been much criticism on the current government for being inefficient and corrupt, let us not forget that the solution to bad democracy is more democracy, not authoritarianism. We once again saw ‘saving the state’ rhetoric emergingin the form of a self-appointed Shiekh-ul-Islam that even Al-Azhar university of Egypt does not acknowledge. (http://islamicpostonline.com/article/al_azhar_islamic_studies_scholars_expose_dr_tahir_qadri_imposter_fake_sheikh_and_demand_prov). The same ‘messiah’ also supported general Musharraf in his referendum and had won a seat in the National assembly during the military dictator’s rule, whichis even more worrisome (http://tribune.com.pk/story/487810/tahirul-qadri-out-to-destroy-democracy-sharjeel/). Tahir-ul-Qadri, founder of political party Pakistani Awami Tehreek and the latest phenomenon to hit the Pakistani political scene,was seen this month playing on people’s emotions and innocence and demanding the same thing he demanded back in 2001;that elections should be held under the judicial control of the Election Commission and administrative control of the army (http://www.lib.virginia.edu/area-studies/SouthAsia/SAserials/Dawn/2001/dec0801.html#conv).

Fact of the matter is that Pakistan has plenty of military messiahs, all coming to limelight with the pretension of eradicating all that is bad and setting the country on the right path. We all know the results of such interventions; each and every one of these messiahs has left the country economically, socially and politically destabilized and intellectually drained. Pakistan needs strengthened democracy, not stage artists riling up peoples emotions in the name of change.