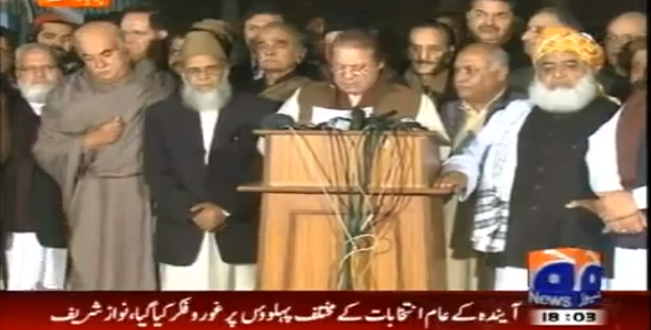 Those who refuse to unite against Saudi-sponsored Taliban and LeJ-ASWJ terrorists wasted no time in uniting against a Sunni Barelvi cleric.

Today, on 16 January 2013, Nawaz Sharif (head of PML-N) spoke on behalf of a bunch of Islamofascists leaders who held a meeting in the drawing room of his sprawling estate in Raiwind. All the luminaries, discounting a dead horse like the misogynist G M Khar, are held together by a couple of factors:

(1) They are all beholden to the murderous, inhuman Islamofascist ideology which stipulates that anyone who does not subscribe to the Wahabist/Deobandi line of action must be killed; and

(2) They have tacitly and openly, depending on the circumstances, supported genocides of the Shias and the Ahmadis, and persecution of the Christians and the Barelvis.

These Saudi-sponsored Islamofascists at the press conference included, among others, Nawaz Sharif,  Fazlur Rehman,  Muanwar Hasan, and Mullah Ajmal.

At the press conference, Nawaz Sharif mentioned, only in half a sentence, the persecution of the Hazara community. He was deliberately withholding the truth: There is no such a persecution as “Hazara persecution”. What has been going on for years is the genocide of the Shia Muslims not just of Quetta, but all over Pakistan. Nawaz Sharif shamelessly did not even made a passing reference to the Lashkar-e-Jhangvi (LeJ, currently operating as ASWJ) which is patronized by the Punjabi government headed by his brother.

Another Islamofascist Fazlur Rehman made fun of Christians and Sunni Barelvis by calling a respectable Christian leader and former Member of Parliament Julius Salik as a clown, and resembling Dr. Tahir-ul-Qadri to Mr. J. Salik.

Talal Bugti who has recently discovered that embracing Islamofascism means money and power made fun of the protest of Quetta Shias. He ridiculed their success in having the Quetta government sacked by saying with a cynical smile, “Nothing will happen by the change of the government!”

Mahmud Achizai who has renounced his progressive ideology by embracing the Saudi-financed Islamofascist cause by condemned the government and threatened to turn the entire Pakistan into a Tahrir Square. On his own, he cannot get one dozen people to hold a political rally. But he knows that subscription to the Saudi brand of Islam means everything: He is Nawaz Sharif’s choice to become Pakistan’s interim prime minister.

While Comrades Nadeem Paracha and Najam Sethi celebrated the Saudi-sponsored consensus against a Sunni Barelvi as a great day for democracy, Comrade Abbas Nasir rightly wondered if Pakistan can see similar consensus on battling terrorism one day too. If TUQ is a threat to democracy, TTP-ASWJ is an outright threat to Pakistan’s existence. Why no such consensus against TTP-ASWJ killing machines?

You can imagine what lies ahead for those Pakistanis who do not subscribe to the evil, inhuman Islamofascism imported from Saudi Arabia. The choice today lies between Saudi Pakistan and Sufi Pakistan. And within that choice resides Pakistan’s peace, progress and prosperity. 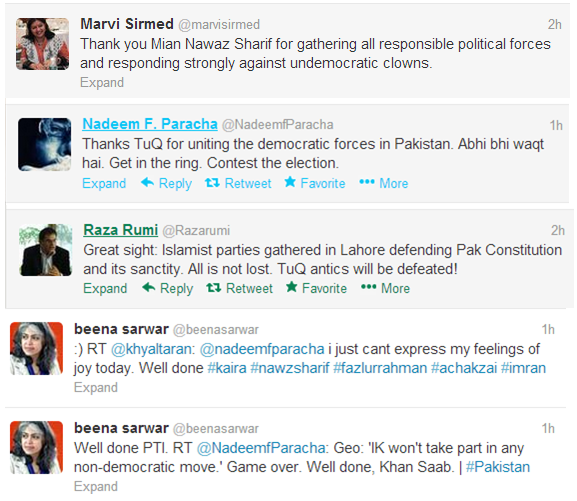 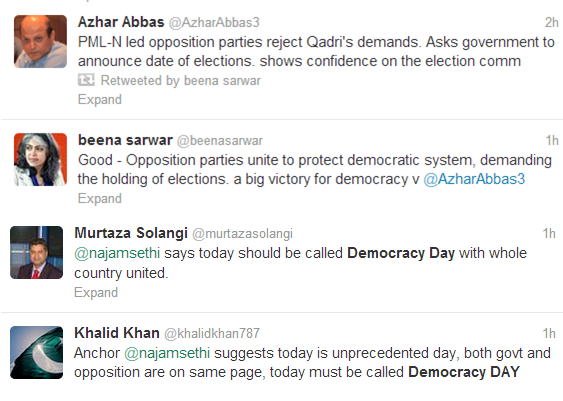 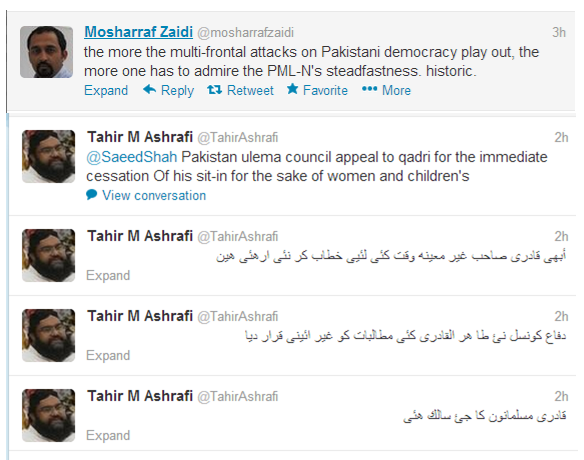 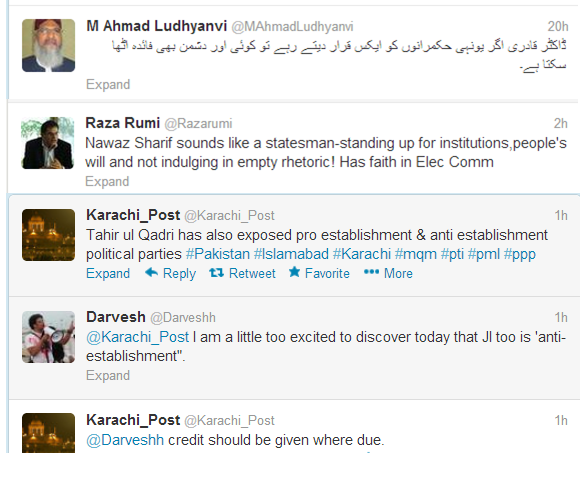