Speak now on #ShiaGenocide, or forever hold your peace – by Saroop Ijaz 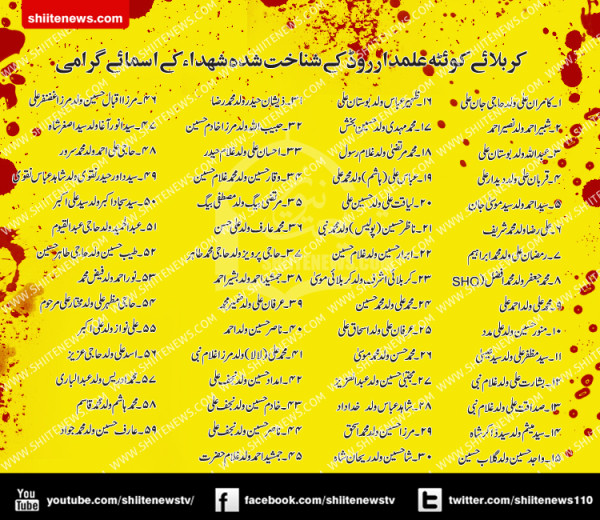 In the summer of 1979, a horrifying thing began to happen in Atlanta, Georgia, US — African-American children began going missing and subsequently their murdered bodies found. This continued till the spring of 1981 and by that time, the dead bodies of 28 children were found. The brilliant James Baldwin wrote an account of the episode in his 1985 book The Evidence of Things Not Seen. Baldwin narrates an arresting story, which provided the inspiration for the book. “Some years ago, after the disappearance of civil rights workers Chaney, Goodman and Schwirner in Mississippi, some friends of mine were dragging the river for their bodies. This one wasn’t Schwirner. This one wasn’t Goodman. This one wasn’t Chaney. Then …: ‘It suddenly struck us — what difference did it make that it wasn’t them? What are these bodies doing in the river?’”

In 2013 in Pakistan, murdered bodies of children are being found. Although a critical difference being that they do not go missing, nothing as sly as that; they are murdered for everyone to see by people who then have the audacity to claim responsibility for it. Syeda Mehzar Zehra is a 12-year-old child, who survived the murderous assault, for now, may she be blessed with a long and happy life. However, one cannot wish her convincingly. Her father was a Shia and was killed for being one. Many young Hazaras in Quetta, this Thursday did not have the fighting chance that Mehzar still has. Yet, we are still not asking ourselves, what are these bodies doing in the river, in our case, a river of Shia blood. If this goes on, we will begin to find bodies that we know, all of us would.

We live in a time and a place where murder does not stir us anymore, at least the common, run of the mill murder does not. The daily numbers of dead in Karachi or Peshawar are just a statistic. Maybe, I presume insensitivity, however, most of us do not give them a second or perhaps, a third thought. Life goes on. Let me propose a simple experiment, which will, perhaps, recapture your interest in the daily murder. Next time you see a news report about someone killed in Karachi or Quetta for no ostensible reason, try and look up the name (of course provided the newspaper has felt the need to print it). Chances are many of you will see a pattern. The Pakistani media goes out of its way to take terrible amounts of trouble in not stating the obvious. Shias are being killed in this country through an orchestrated scheme. Some people do not like it when the word ‘genocide’ is used; I assume they are waiting to begin condemnation once the threshold number is crossed, they will not have wait for much longer now. In any event, most news outlets do not deem it fit to mention that ‘Shias’ are killed in the attack. Apparently, saying ‘sectarian violence’ conveys all that needs to be said.

The policy of not identifying ‘sectarian’ affiliations is probably from a different time, now it seems from a different place. The objective would perhaps be something noble if slightly innocuous as not aggravating sectarian divides, not fanning flames etc. in any event, whatever it was, it has outlived its utility. The divide is already aggravated, the flames are already fanned. Identifying the victims in news reports and opinion pieces will not stop these barbaric murderers. However, it at least will allow the courtesy that they have not died accidentally. They have died for the reason of being a ‘Shia’ and it is only decent that this is acknowledged. Those who died in Quetta were denied even the nominal respect of coverage of their death since the media was busy covering an inconsequential political rally in Karachi and unserious quibbling on passports. While 100 people were murdered; this is shameful.

Remaining on news reporting, why the media persists with the hollow term ‘targeted killing’, when in fact, all they are saying is that the killing is entirely random. If it is a ‘targeted killing’ then there should be a responsibility or even a curiosity to find out why a particular individual was a target. To put it plainly, a disturbing majority of those killed without an apparent reason is ‘Shia’. Being a Shia in Pakistan is a very good reason for someone being a target. Not mentioning that is either complicity or cowardice.

Firstly with Malala Yousufzai, recently with Shahzeb Khan, we have seen some evidence of our ability to mobilise and condemn brutality. However, not all causes are treated equally. The Lashkar-e-Jhangvi (LeJ)/ASWJ/SSP do not allow for the shallow nuance and half-baked ideas of anti-imperialism, US withdrawal from Afghanistan, drone attacks, etc. They display these racist cults of deaths for what they are. Hence are less glamorous, less room to sound intellectually skeptic. Neither do the leaders of these organisations have feudal surnames and belong to far-flung ‘rural and backward areas’ so as to enrage our tender sensibilities. No long marches against them in the near future. Not as hip and modern as shady marches for hazy agendas of ‘change’. Operation against ‘our strategic assets’ brings forth the need for a consensus and other such insincere gibberish. The military establishment has never bothered with these formalities when it comes to Balochistan generally. The Army, the FC, the federal and provincial governments need to realise that this will get to everyone, it already is. The military establishment has to realise what its ‘double games’ are costing us and will eventually cost itself. The Balochistan government has to grow some spine and stand up to the FC or else go home. The Punjab government has to stop mollycoddling these organisations. The PPP-led federal government needs to stop ‘surviving’, look the challenge in the eye and put the talk into action.

The futility of writing opinion pieces like this is not lost on me. Yet, even more frightening is the notion when one will not write or say this, because it will become too repetitive, too exhausting, perhaps we will become too afraid or worse too numb.
Published in The Express Tribune, January 13th, 2013.

3 responses to “Speak now on #ShiaGenocide, or forever hold your peace – by Saroop Ijaz”