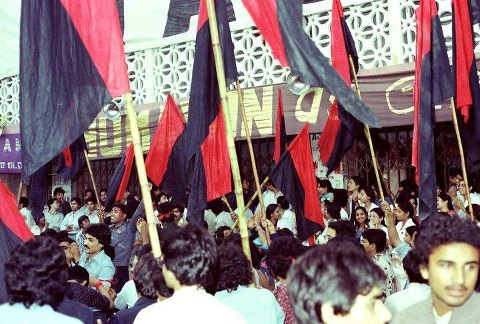 1950s belonged to an era which was highly influenced by Communistic ideas. A kid opens up his atlas and gazes at the vastly expanded map of the USSR on the globe, at first sight; curiosity provokes him to ask his guardian what on earth these red boundaries represented. The answer would be ‘the Socialism and a Socialist Superpower State’

Those were the times when leftist ideology reigned the minds of world’s intelligentsia. Sub-continent was no exception. In Pakistan the student wing of the then Communist Party, Democratic Students Federation, was busy extricating the youth of idealist ideas and strengthening them enough to speak up against the State’s indifference with respect to dilapidated Education System. It was the movement of the 7th January 1953 successfully initiated by DSF for Students’ rights which resulted in several beneficial educational measures. Victory was not easily achieved as 6 comrades of the federation had to sacrifice their lives to be able to have their demands accepted.

Having done so, DSF just didn’t disappear but kept on uniting the students on national level. 1956 observed the banning of DSF and it was when its revolutionary cadre joined the ranks and files of National Students Federation – another student organization created – by Ayub Khan to garner support for his regime. The NSF was thus hijacked and carried on the struggle which the DSF had started having laid the lives of its members.

To many of the readers, NSF must not be a new name. A senior columnist – famous for his anti-religious-bigot writings – of a renowned newspaper frequently mentions NSF in his writings while writing about student politics in the Karachi University of his times. Be it the issue of dictatorship, the matter of class-based Education system, the case of religious intolerance, the cause of Palestinian liberation, NSF didn’t step an inch back from its anti-imperialist, leftist, progressive, third-worldist stance. It always aligned itself with the oppressed, suppressed segments of the society, giving women liberty, equal representation, and fighting discrimination against minorities.

NSF died out in the 1980’s when Zia-ul-Haq imposed ban on students unions, which NSF prominently used to lead in many a varsities and colleges and were a cornerstone of NSF progressive politics, in February 1984. And then came the reign of terror, the culture of Kalashnikov to which NSF was not accustomed.

NSF had its slogan, “Revolution has three symbols; Students, Laborers, Peasants”, following which the federation struggled for the unity among the mentioned segments and aspired for a Democratic Revolution, one which could give hope to the poor. It was this very tendency that made NSF fight against the class-based education system of our country. Now talking of the present, there are many students’ organizations – many directly involved in fake-admissions, gangsters mafia – which have apparently no agenda or work-plan of their own. They work on their party-line determined by their respective mother-wings. Fighting for Students’ Rights doesn’t occupy their criminal minds. Today when it is impossible for

a person belonging to the lower-class to provide his children a better, emancipating education, when commercialization of education has sidelined the poor students, when the rich even if not competitive easily get the admissions in private universities but the poor with even meritorious grades cannot afford to get enrolled in expensive varsities selling education at exorbitant rates, there is not a single student organization but the NSF Pakistan with a comprehensive manifesto.

Revived in 2008, it has since then been expanding its working in different areas and educational institutes of the country despite the grim political situation, organizing every now and then events related to the revolutionary struggle. The demands might have changed since the 1953’s remarkable event of the DSF but the struggle continues, and this time in 2013 NSF has all braced its comrades to commemorate the Demands Day on the 8th of January to present the charter of students’ demands and pay homage to the great sacrifice of comrades back in 1953.

The long-forgotten left of the country is re-awakening with a more dynamic socialist vision.