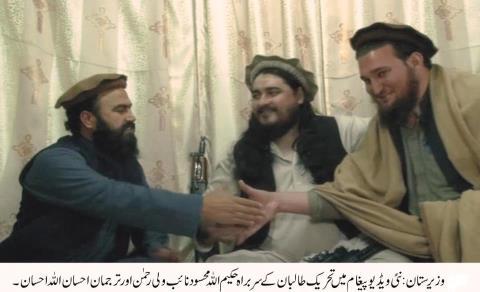 Open your eyes, Rehman Malik. We are Afghan Taliban and Afghan Taliban are us. Look again, Ihsanullah Ihsan and Wali-ur-Rehman too are a part of us. Our friends Ludhianvi and Tahir Ashrafi represent us in Pakistan’s settled areas.

The video and the picture are a slap on the face of Pakistan’s Interior Minister Rehman Malik who has in the past few years receded into denial and obfuscation mode when its comes to clear identification of Takfiri Deobandi militants of Taliban and Sipah Sahaba and acknowledgement of the fact that Pakistani State (army, police, judiciary, government) has failed to protect innocent Sunni, Shia, Ahmadi, Christian communities from attacks by Deobandi militants of Sipah Sahaba Taliban.

In recent months, Rehman Malik, on behest of Pakistan army generals, has tried to obfuscate in the following ways:

2. By trying to deflect from Taliban’s real identity, i.e., calling them Zaliman or TTP, hiding the fact that TTP (Tehrik-e-Taliban Pakistan) is nothing but a Pakistan branch of the Afghan Taliban. Both TTP and Afghan Taliban are tightly structured and coordinated under the hierarchy of Mullah Omar Deobandi. Not once in the last ten years has Mullah Omar dissociated himself from the TTP or condemned their violent attacks on Pakistan army, police, Shias, Sunni Barelvis etc.

3. By trying to hide the fact that Taliban and Sipah Sahaba (currently operating as Ahle Sunnat Wal Jamaat ASWJ) are two names of the same Deobandi militant group. While Taliban are organizationally present and effective in Pakistan’s Tribal Areas (FATA), they are present in settled areas of the country in the shape of Sipah Sahaba (ASWJ). Sipah Sahaba’s facebook page (Ulma-e-Deoband http://www.facebook.com/ulmaedeobnad?ref=ts&fref=ts) is a clear proof of the overlapping membership, Deobandi ideology and close association between Sipah Sahaba and Taliban.

4. By trying to present Ihsanullah Ihsan as an artificial entity separate from the Taliban. The recent video and pictures show that Ihsan is an integral member of the Sipah Sahaba Taliban (SST) network and has direct contact with and authority of Hakeemullah Mehsud.

5. By blaming Chief Justice Iftikhar Chaudhry and Chief Minister Shahbaz Sharif for uninterrupted activities of the Sipah Sahaba in Karachi, Islamabad, Quetta and Peshawar, the areas which fall under the purview of the PPP-coalition government.

DERA ISMAIL KHAN: The head of Pakistan’s Taliban said his militia is willing to negotiate with the government but not disarm, a message delivered in a video given to Reuters on Friday, 28 Dec 2012. he release of the 40-minute video follows three high-profile Taliban attacks in Peshawar this month: an attack by multiple suicide bombers on the airport, the killing of a senior politician and eight others in a bombing and the kidnap of 22 paramilitary forces on Thursday. “We believe in dialogue but it should not be frivolous,” Hakimullah Mehsud said. “Asking us to lay down arms is a joke.”

Mehsud, who has a $US5 million ($4.8 million) US government bounty on his head, said the militant organisation would consider peace talks with the Pakistani government but only if it abandoned ties with Washington.

In the video, Mehsud sits cradling a rifle next to his deputy, Waliur Rehman. Military officials say there has been a split between the two men but Mehsud said that was propaganda. “Wali ur Rehman is sitting with me here and we will be together until death,” said Mehsud, pointing at his companion.

The Taliban said in a letter released Thursday that they wanted Pakistan to rewrite its laws and constitution to conform with Islamic law, break its alliance with the United States and stop interfering in the war in Afghanistan and focus on India instead.

Mehsud referred to the killing of senior politician Bashir Ahmed Bilour in his speech and said the political party, Awami National Party, would continue to be a target along with other politicians.

“We are against the democratic system because it is un-Islamic,” Mehsud said. “Our war isn’t against any party. It is against the non-Islamic system and anyone who supports it.”

Pakistan is due to hold elections next spring. The current government, which came to power five years ago, has been unwilling to conduct a full-scale military operation against Taliban (Deobandi militnts) hiding in Waziristan Tribal area.

In view of Pakistan army’s unwillingness to take action against the Taliban, the US military has intensified its use of drone strikes in Pakistan’s Tribal areas.

The Taliban’s key stronghold is in North Waziristan, one of the tribal areas along the Afghan border and the site of most of the hundreds of drone strikes by the United States.

Mehsud said in his interview that although he was open to dialogue, the Pakistani government was to blame for the violence because it broke previous, unspecified deals.

“In the past, it is the Pakistani government that broke peace agreements,” he said. “A slave of the US can’t make independent agreements; it breaks agreements according to US dictat.” Perhaps Mehsud expects Pakistan army to shoot down US drones attacking Taliban and Al Qaeda hideouts in North and South Waziristan and other tribal agencies.

If Pakistan is to survive, these Takfiri Deobandi thugs of Sipah Sahaba Taliban (SST) not only must be disarmed, the whole so-called lawless area in North Waziristan and Sipah Sahaba ruled pockets of Karachi, Gilgit and Quetta must be brought under the rule of the land. This farce can not go on forever. Pakistan army cannot continue to protect these Deobandi militants in the name of its Jihad project; they are killing our fellow Pakistanis. They want to benefits of living in Pakistan and they don’t want to contribute. Enough of this thuggery. And whoever amongst them has been or is a criminal, must be brought to justice. This is the only way to save the rest of the country.

Negotiations entirely are a joke. We are asking terrorists (terrorists!) to please lay down their arms. While all that we have to do is JUST re-write our laws and our constitution. And while this drama happens – they keep on killing us while we idiotically do nothing. Except of course weave conspiracy theories to justify doing nothing.

Is there any hope when our Deobandi clerics in India and Pakistan (Taqi Usmani, Hanif Jalandhri, Tahir Ashrafi) will declare this man, an evil and wajib-ul-qatl for harming so many lives. Why don’t they issue a fatwa against Sipah Sahaba Taliban? Our armed forces don’t provide security to the citizens of Pakistan from this neferious movement. Our politicians confuse the nation and opposes the cleansing operation. Our media serves the criminals agenda by giving them air time to terrorize us. Our judiciary bail and compensate these criminals.

Taliban has thrown an open challenge to the state and put conditions which cannot be accepted under any circumstances. They have already killed thousands of innocent people in the name of Islam and now threatening to kill leaders of political parties in order to disrupt the next elections. It will be a totally futile exercise to either hold talks with them or make efforts to change its leadership which has failed so far and unlikely to yield any positive results in the future as well. Pakistan needs follow the Sri lankan military pattern in which it eliminated LTTE ruthlessly and Taliban require same type of treatment and even worst. If Pakistan has to survive it must act now or go back to stone-age… 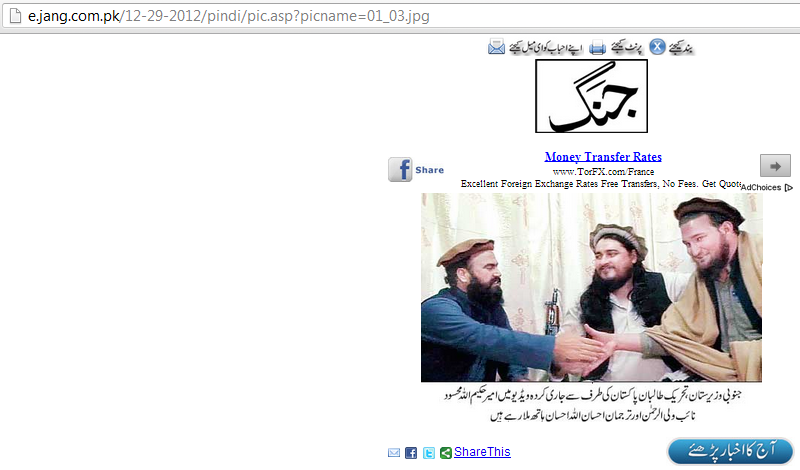