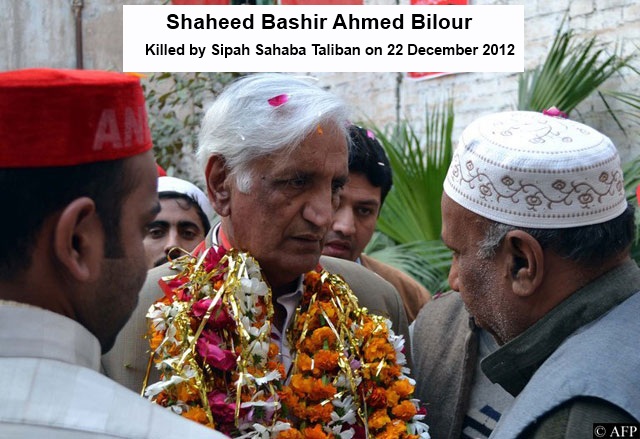 Here is a historical speech by Shaheed Bashir Ahmed Bilour in the Khyber Pakhtunkhwa Provincial Assembly in which he criticizes Takfiri Deobandi mullahs (clerics) of the JUI, Sipah Sahaba and Taliban.

In particular, Shaheed Bilour boldy names and condmens the Al Qaeda Chief Ayman Al Zwahiri and says it was the Al Qaeda and its supporters in the Taliban, JUI and Sipah Sahaba which introduced the vicious culture of suicide jacket and suicide bombing in Afghanistan and Pakistan, which was later imported into Deobandi seminaries (madrassas by Deobandi mullahs). He furhter says it were the pro-Taliban mullahs of JUI (Fazl-ur-Rehman and Samiul-Haq) and Jamaat Islami (Qazi Hussain Ahmed and Munawar Hasan) who handed over Swat to Taliban militants.

Shaheed Bilour boldly confronts and warns the JUI and other Takfiri Deobandi mullahs to refrain from claiming to represent “all Muslims”. He says these pro-Taliban mullahs represent their own economic and political interests, not all Muslims.

No wonder Takfiri Deobandi militants of Sipah Sahaba Taliban considered it necessary to kill Bashir Ahmed Bilour. He sacrificed his today for our tomorrow.