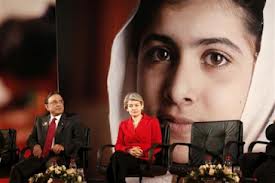 After promoting the Taliban through her dubious Jinnah Institute, for a post 2014 Afghanistan, Sherry Rehman not only does not deserve any credit. Rather, she along with Rehman Malik represents the military-Judicial establishment lobby that the elected government has to put with in order to survive the constant danger of covert military coups and overt Judicial coups. Article cross posted from Americans for Democracy and Justice in Pakistan.

PPP’s four years of government in Sindh – by Raja Asad

The President of Pakistan, Asif Ali Zardari, standing up against the extremists and Jihadists that rejoiced in the assassination attempt against Malala Yousafzai, the courageous 14 year old advocate  for education for Pakistani women and girls, recently traveled to Birmingham, England to meet with Malala and pledge $10 million to a new and energized program for female literacy in Pakistan.  This act of leadership, courage and defiance against extremism by President Zardari did manage to capture the imagination of the international press, with photos of the meeting with Malala on all Evening News programs in the United States.  But this coverage was the exemption, not the rule.  Media most often concentrates on the more bombastic  negative stories of terrorist attacks and religious intolerance.   But there is a new Pakistan emerging  –  a moderate, tolerant and modern nation building a new society and new economy against huge odds. In the long term, when the history of South Asia and the history of the world’s fight against militancy is written, the story of the emergence of a moderate and modern Pakistan  will be a central theme.

There is little historical precedent for what Pakistan, in the face of incomparable challenges, is achieving. Early next year, the elected civilian government will complete its five-year term for the first time in national history. With practiced skill, some commentators pay a perfunctory word to Pakistan’s nuclear arsenal, security challenges and little else.  It is a simplistic portrayal and incomplete. Pakistan, more accurately and more so than ever before, is also a pluralistic democracy, a promising economy, and the potential comeback story of tomorrow.

During its tenure, the Government has overseen major advancements to educational opportunity and equality, to women’s rights, social security and public health. It passed the Right to Free and Compulsory Education Bill 2012 that ensures cost-free, compulsory education to children 5-16 years-old in all the provinces and in FATA. It launched the Waseela-e-Taleem program, inviting the greater cooperation of parents in the education of their children, especially their daughters.  In support of the rights of women, the current government has passed landmark legislation –  the National Commission on the Status of Women Bill 2012, The Prevention of Anti-Women Practices Bill 2008, and the Acid Control and Acid Crime Prevention Bill 2010. These measures granted fiscal and operational independence to the commission monitoring and ensuring women’s rights, made clear the repercussions for anti-women violence and misogyny, and instituted a stronger legal framework that defends the rights of women and provides for their protection. A social safety net, the Benazir Income Support Programme provides poverty relief through monthly payments to the female heads of households as well as vocational training and interest free microloans to those most in need.  Over the past five years, in the face of inimitable difficulty, more girls are in school, women are safer, and the neediest households are being assisted.

Islamabad is shifting the paradigms of political science. Rather than usurping or consolidating power, the nation’s capitol is diffusing it. By transferring erstwhile dictatorial authorities from the head of state to the legislature, President Asif Ali Zardari restored Pakistan’s democracy, returning power to the Parliament, reinvigorating the 1973 Constitution and relegating to the historians the policies of Pakistan’s disposed military dictators. Zardari has also brought greater governance to areas that some have called ungovernable.Political parties are now operating legally in the tribal areas, offering residents a more inclusive channel for political expression. Within Parliament power has been similarly devolved. Five ministries from Islamabad are now under the purview of the provinces, where governance can be administered at the ground level allowing services to meet the citizenry more efficiently. Empowered, the legislature has governed with prudent independence, willing to challenge even the world’s sole superpower when wronged and returning to the people the representation they entrusted.

By implementing responsible policies, Pakistan is realizing its latent economic potential. The introduction of Smart National Identity Cards (SNIC) has improved government capacity to conduct relief operations, social development programs, and to administer humanitarian assistance. Through the SNIC cards and the NADRA system, new, more effective collection practices will boost tax revenues that already doubled over the last four years, engender greater personal accountability and “economic patriotism”, and help shine a light on the country’s thriving and untaxed underground economy. Alongside historic levels of overseas remittances and a shrinking trade deficit, these policies should strengthen Pakistan’s fiscal base and foreign exchange reserves, allowing the Government to support critical domestic programs, repay its international creditors, and borrow sensibly at sustainable rates. The Karachi Stock Exchange is hitting all time highs and economic growth is expected to reach four percent. For a nation managing multiple internal and external conflicts, such performance is noteworthy.

Pakistan can use its growing fiscal resources to continue upgrading its transportation infrastructure and capitalize on its advantageous geo-economic location. With the help of international partners, this is already underway. The ten nations and institutional partners of the Central Asia Regional Economic Cooperation program (CAREC) agreed in October to implement more than $23 billion in new projects, connecting regional economic hubs all the way from Karachi and Gwadar to northern Kazakhstan. Like the CAREC project, the $70 million upgrade of the Peshawar-Torkham Highway begun in November has similarly been called a gateway to increased trade and economic development for the region.  And, after earlier this year agreeing to achieve “Most-Favored-Nation” trade status, Pakistan and India recently opened a dedicated trade gate at the Wagha-Atari border, through which trade ties are expected to reach $8 billion in 2014, tripling the 2011 total.

Besides roads and bridges, Pakistan is also increasing its power supply and securing much-needed new sources of energy to help meet national shortfalls. Progress is being made. In Karachi, a public-private partnership will restore a 94-Megawatt power generation plant that will provide 200GWh annually, as well as 3 million gallons of desalinated water per day, and create more than one hundred new jobs. As one of his first orders of business, U.S. Ambassador to Pakistan Richard Olson announced the provision of $150 million to upgrade the Mangla Dam in the country’s northeast, enhancing the energy power house’s generation capacity to 1310MW. The Petroleum Policy of 2012 is increasing exploration rates — the rights to develop 60 untapped blocks are now being auctioned off to international and domestic bidders. The ingenuity of Pakistan’s entrepreneurs and engineers is also on display. Mere months after the nation’s first wind farm opened in Jhimpir, Pakistan rolled out and linked up its first domestically produced wind turbine. Right now it’s harnessing clean, sustainable energy.

While much work remains to sufficiently power and develop the national economy, Pakistan’s pro-growth policies are deepening regional trade ties, improving important relationships with India and Afghanistan, and, most importantly, increasing stability – the region’s most valuable commodity.

U.S. relations are back on track, as well. Pakistan appointed Ambassador Sherry Rehman to Washington last November as bilateral ties bottomed out. Since then the relationship has turned around completely, overcoming a slew of challenges from Raymond Davis, Osama bin Laden and Abbottabad, to the Salala Incident and the death of 24 Pakistani soldiers. During her tenure, through intense negotiations and ceaseless contact with administration officials, Senators and Congressmen, Rehman and others helped reopen NATO supply lines and oversee a dramatic improvement in economic, security, and political ties. Almost inconceivable 12 months ago when relations reached historic lows, U.S. ties are now fully repaired and on “a positive trajectory,” as Pakistan Foreign Minister Hina Rabbani Khar recently stated.  On the one year anniversary of the Salala airstrikes that so damaged relations, a high-level delegation led by Finance Minister Abdul Hafeez Shaikh was in Washington to restart the U.S.-Pakistan Strategic Dialogue on economic and financial cooperation. The United States, too, shares Minister Khar’s positive assessment for the future of the relationship – just ask Deputy Secretary of State Thomas Nides who with Finance Minister Shaikh reconvened the strategic dialogue.

Of course, large obstacles remain in the Pakistan comeback story. But consider for a moment, that despite those challenges — because of a government
that is beholden to its people and partners that have honored their promises — Pakistan’s future looks brighter now than when the civilian government took office five years ago.   The picture of the courageous Malala Yousafzai  sitting with the President of Pakistan Asif Ali Zardari is a symbol of the new democratic and progressive Pakistan that is emerging, an untold story that will change the future of South Asia.

David James currently lives in Dubai where he works in the potable water industry. He is a former Obama campaign staffer and a politics and economics graduate from Oxford University.