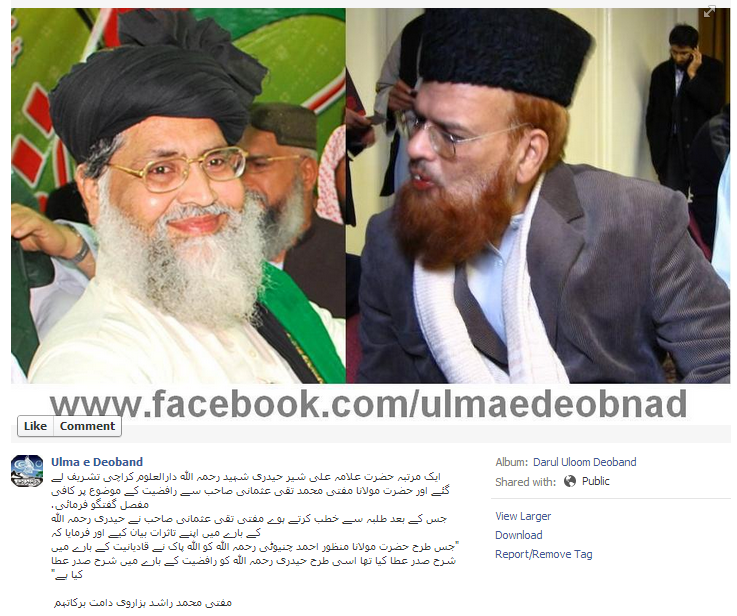 LUBP Editor’s note: The following post is a slightly edited version of a valuable article on anti-Shia violence in Pakistan written by Mr. M.A. Niazi (The Nation, 7 Dec 2012. The writer is a veteran journalist and founding member of The Nation. The editing has been done to take care of minor omissions and misstatements.

The series of attacks by Takfiri Deobandi militants (Sipah Sahaba Taliban) on Shia Muslims in Ashura gatherings, which claimed so many victims in Dera Ismail Khan, Karachi and Rawalpindi, also raised questions about the existence of the sectarian divide, and its susceptibility to misuse. There is also the question of who profits from the disunity thus sown, which is taking place at a time when the Muslim world is undergoing more turmoil that it has experienced in a long time. Muslims cannot just paper over the sectarian divide by pretending it does not exist. In fact, one of the first steps to overcoming it would be to accept that it exists, and that it is very old, and that it has served different purposes, some of Muslims themselves.

[First and foremost, it is inaccurate to describe anti-Shia violence in Pakistan in Sunni vs Shia sectarian terms because the same militants (Takfiri Deobandis) who are attacking Shias are also killing moderate Sunnis, Ahmadis, Christians etc. Thus, it is a case of Takfiri Deobandi terrorism vs the rest of Pakistan. Yes, Shias face the major brunt of Takfiri Deobandi terrorism in Pakistan due to anti-Shia sectarian reasons.] Pakistan faces this sectarian divide because it inherited it from the Mughal Empire, though the origin of the divide is much older than that, going back even beyond Karbala to the martyrdom of the Caliph Usman, over a quarter of a century earlier. Both then, and at Karbala, it was about ruling, and not about theology. The Shias hold that Ali should have been Caliph, and one version of the Shia declaration of faith holds Ali to have been his Caliph without interruption. However, the Sunnis hold Ali to have been the fourth and last Rightly-Guided Caliph.

This rejection of the Umayyad, who came after, and against whom the Imam was martyred, came when the caliphate was taken over by the Abbasids. It is not generally known that the Abbasids’ claim was one version of the Ali-id claim. The Abbasids were in their own right Hashmis, like Ali and the Holy Prophet (PBUH), being descendants of Abbas ibn Abdul Muttalib, who was the uncle of both. But also, after Karbala, Mohammad ibn Ali, known as Mohammad ibn Hanfia, after his mother, whom Ali had married after the death of the mother of Imam Hassan and Imam Hussain, Bibi Fatima, did not accept that his surviving nephew, Imam Zainul Abideen, was the leader of the Bani Hashim, and that he was, as the surviving son of Ali. He later sold this claim to the Bani Abbas, who thus claimed the caliphate in the name of the descendants of Ali, and claimed his Iranian support base.

Two points need mentioning here. It was under the Abbasids that the four Sunni schools were formalised, and at this time, Iran was not yet Shia. However, at this time the Umayyad Ali-id controversy was still strong, and one of founders of a Sunni school, Imam Abu Hanifa, was thought to be a Shia, and even gave money to Nafs-i-Zakia, one of the Ali-ids, who performed a khurooj against the Umayyads, or raised a rebellion. (The khurooj was something of a tradition among the Bani Ali in Umayyad times, which the Abbasids brought to an end.

[While Takfiri enemies of Shia in Pakistan, Saudi Arabia and other countries describe Shia as an Iranian sect, it is a fact that Iran remained a Sunni majority country right from 7th century to 16th centure. The Safavid dynasty made Shi’a Islam the official state religion in the early sixteenth century and aggressively proselytized on its behalf. It is also believed that by the mid-seventeenth century most people in Iran had become Shi’as, an affiliation that has continued.]

When Islam came to the subcontinent, Iran had become Shia. However, as Indian Muslims had become Hanafis, there was mutual acceptability. Indian Muslim rulers, including the Mughals, drew much of their personnel from Iran, and thus the Shias of India were Iranian in attitude.

When the Mughal Empire collapsed, an Iranian official, Nawab Safdar Jang, was appointed Subedar or Governor of Oudh. This dynasty evolved into what the British acknowledged as the Kingdom of Lucknow. They encouraged it to rival the Mughal Emperor, whom they maintained as a pensionary, and as the King of Delhi. Thus, there was a proper court at Lucknow, and along with the court in Tehran, was presided over by a Shia ruler. This court set the norms for the commemoration of Ashura throughout the subcontinent. It was here that the art of marsia nigari reached its zenith, and became virtually a separate literary genre, and it was also here that the majlis took its form. The areas of India, which became part of Pakistan, already had a Shia population trained to look for inspiration to Persia, specifically to the seminaries, especially of Qum, where the religious scholars received their training. This direct contact had become particularly strong after the end of the Oudh Kingdom in 1857. In fact, the deposition of the King of Oudh was one cause of the mutiny. When Pakistan received Shias from India, they brought with them traditions and customs that were imitated by their local co-sectaries. It is worth noting that the Hindus of India, both in government and otherwise, made no distinction between Shia and Sunni, but treated all alike as ‘Muslims.’

Though such a distinction is not made in India even now, Pakistan found itself bereft of non-Muslims, who had been a permanent presence before. This desire to use religion to define an ‘other’ led to the resurgence, even prominence, of a tendency that had been suppressed before partition, when there was little emphasis on Shia-Sunni differences in the common Muslim struggle for Pakistan. However, now the strand which had considered Shias a minority, indeed outside the pale of Islam, gained strength. Not only did its propaganda succeeded to the extent that the massacre of Shias won acceptance not as being right, but as something to be accepted. A second success was the joining of al-Qaeda. The so-called Punjabi Taliban are essentially sectarian parties [Sipah Sahaba which also operates as Lashkar-e-Jhangvi, Ahle Sunnat Wal Jamaat and Jundullah]. The Taliban and Sipah Sahaba etc have a Deobandi origin, which is originally stronger than Barelvis (also Hanafi, but with an academic tradition originating in Rae Bareilly rather than Deoband), which inclines them to accept the sectarian argument. [Deobandis are, in their ideology and anti-Shia beliefs, more inclined towards Salafist-Wahhabi ideology.]

[By injecting Al Qaeda and other Takfiri militants] The Western powers have also tried to play the sectarian card in Syria, where there is not just a Shia-Sunni, but also a Muslim-Christian divide. There has been steady perception that neither Shias, nor Christians are safe under Sunni rule. This contradicts the historical record, which shows Islamic governments taking the responsibility to safeguard non-Muslims have done a pretty fair job. Much better than the Western powers that have been intervening in the Levant since the 19th century. The interventions have favoured the Christian minority, who have carved out a separate state in Lebanon, and have allied themselves to Shias, Alwaites and Drouze to offset the Sunnis. [However, given the massacre of Shias and mistreatment of other minorities in Taliban ruled Afghanistan, and other expression of radical Salafist ideology in Mali, Libya etc, the fear of Christians and Shias in Syria is not completely unfounded.]

Be that as it may, Shias in the subcontinent have always stood with the Sunnis as co-religionists, and have always been integrated within the national mainstream of Pakistan. One reason is, perhaps, to be seen in the central event distinguishing the Shia: Ashura is an anniversary for Sunnis too, who count Ali as a Rightly-Guided Caliph. In the sense that Shias are members of the Shian (party) of Ali, Sunnis are also members of that party. To put Shias outside Islam, as the Takfiri Deobandi parties wish, would force Shias to take the American side in the war on terror. If there is some support for the Taliban in Pakistani Islamists, it is out of opposition to the USA, rather than love for their style of rule.

But what seems to concern the government is the possibility of mass terrorism [the fear of full scale genocide of Shia Muslims at the hands of ISI-trained Deobandi militants]. The blanket bans on pillion riding and mobile services show that. However, it would be shortsighted to treat as a mere law and order problem while the core issue [institutional support to Takfiri Deobandi Jihadist parties] remains ignored. Sunni and Shia are here to stay, not only in Pakistan, but also the entire word; this divide has now been around for about 1300 years. [The anti-Shia violence is something that can only be resolved by a State, government, army and judiciary, which is sincere and honest in bringing the Takfiri Deobandi militants to justice, without undue concessions and delay.]