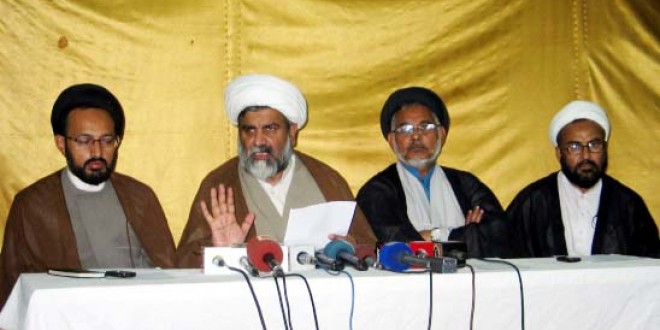 Majlis-e-Wahdat-e-Muslimeen (MWM) has announced to show its mass strength at Quran-O-Sunnat Conference on July 1 at Minar-e-Pakistan Lahore.

They said that purpose of the today’s press conference was to convey the message of unity of Majlis-e-Wahdat-e-Muslimeen to people of Pakistan and inform them about international conspiracies against Pakistan.

They said Pakistan was facing crisis on internal and external fronts. These crises were due to conspiracies of the U.S., Zionist Israel and India which are aimed at destabilization of Pakistan.

On internal front, U.S. agents were trying to create instability inside Pakistan. They got alighted innocent followers of Quran, Sunnat and of Ahl-e-Bait (AS) from buses and then targeted them to murder them. Bombings in mosques, processions and other places are also parts of global plots.

On the other hand, geographical boundaries and Pakistani airspace are being violated to tarnish the image of Pakistan as a sovereign and independent country.

The MWM leaders said that Millat-e-Jafaria always played a leading role for defence and stability of Pakistan. They said We didn’t desist from sacrificing our lives for sacred defence and counter these conspiracies.

We want to inform you that Millat-e-Jafaria Pakistan has held a Conference under the topic of awakening of Ummat on March 25 in Karachi to register our protest against rising sectarianism, corruption and the U.S. meddling into Pakistan’s internal affairs. After that, conferences in all over Pakistan including Faisalabad, Jhang, Multan, Bhakkar, Baltistan, etc., were held.
Now we are holding Quran-O-Sunnat Conference at Minar-e-Pakistan on July 1. This epoch-making event will help convey our message to the enemies of Pakistan.

They said preparations for Quran-O-Sunnat Conference are in full swing. Members and supporters of Majlis-e-Wahdat-e-Muslimeen are busy in these preparations day and night. More than 6,000 religious scholars and notables have been issued invitation cards to participate in this conference.

They announced Millat-e-Jafaria would participate in this conference wholeheartedly to renew its pledge to defeat all anti-Islam and anti-Pakistan conspiracies. Hundreds of thousands of followers of Quran and Sunnat/Ahl-e-Bait (AS) from almost all cities and villages will participate. Their caravans will start moving to the venue on June 29.

At the conference, Majlis-e-Wahdat-e-Muslimeen (MWM) would give a comprehensive roadmap to drive Pakistan out of prevailing crisis. The roadmap would help end U.S. interference into Pakistani affairs, to strengthen defence of Pakistan, to end corruption, and safeguard Pakistan’s ideology and territory.

Quran-O-Sunnat Conference will introduce a new chapter in Pakistan’s history. It will give a message of unity to all communities and help unveil the enemies of Islam, Muslims and Pakistan.

Trying to cure an illness with the very disease itself. Is this politics or homoeopathy?

I was unable to perceive the basis of your post, if any, as you have shared none.

First of all, I think the name for the conference has been taken from Sahih Bukhari. Last I checked, the suffix following Quran was something else.

Secondly, I see no difference between this rhetoric and the claptrap of Deobandi/Salafi organizations in Pakistan. The only difference is that this party is a Shia Islamist party, and ironically – almost laughably – espousing a political ideology similar to those they are opposing.

Look at shallow rhetoric in the text posted above. Everything has been blamed on the imagined external enemies of Pakistan: India, US, Israel and unknown enemies of Islam.

I am a critic of the US, a supporter of the (secular) Palestinian cause, and I consider India a regional bully (post 1991), but I am not going to buy the buncombe that these countries alone are culpable for all wrong that transpires n Pakistan, especially against Shias. If these people can’t tell the truth, why do they lie and mislead people by further reinforcing their nationalist dogmas? Just to remain relevant, but at the same time save their own skins?

How callous of these people and their supporters. The common Shias have been paying with their blood for 40 years while these people have been selling their blood to Iran. This organization does nothing against Iranian interests, and is in fact ready to sacrifice dozens of Shias for Iran’s Al-Quds rallies, the real motive behind which is clear to all those who can use their brains.

Iran on the other hand doesn’t give a damn by not even bothering to at least condemn our massacres on humanitarian basis if not religious. And these people would defend it because the citadel of Islam – the new Alamut – must be protected at all costs and Shias around the world should get killed in order to enable Iran to pose as the leader of all Muslims when in reality Arabs do not give them even 2 hoots.

Without even rudimentary understanding of politics, and without any regard for people who they use as bait they are continuing their misadventures, and do not even have to courage to bloody name the people who are killing us. And don’t say a word on this, because I lost my brother to one such adventure by these idiots and their paid men in Quetta.

So, if these self-arrogated leaders cannot speak the whole truth, they can at least stop presenting us as Iranian proxies and misleading us with lies that further aggravate our plight.

The name of this conference is exactly the same as that of another public meeting held at the same venue on 6th July 1987 under the leadership of Allama Arif Hussain al-Hussaini, since martyred by the US/Saudi puppet Zia. Qura’an and the sunnah of the Holy Prophet of Islam (pbuh) are the two sources upon which all Muslims – including, of course, Mohammad ibne Ismail Bukhari – agree.

It is a fact that the foundation of anti-Shia terrorism in Pakistan was laid down by the US-Saudi-ISI nexus in the garb of Deobandi ‘mujahedin’. I am not aware if Deobandis have ever criticized this role of US, Saudis and ISI. Please enlighten if I have missed any such criticism by Deobandis.

India’s active role in disintegration of Jinnah’s Pakistan is also a fact. Shias have consistently opposed that role since 1947. If Deobandis – who were initially pro-India – have now aped this line, should this be a reason for Shias to distance themselves from it?

Those Pakistanis (not just Shias) who participate in Al-Quds rallies are not herded there by any organization. Most of them are reasonably educated, and come to these rallies on their own, not through any motivation by Iran.

The attacks, not just on al-Quds rallies, but on majalis, shrines, doctors’ clinics, and common citizens, as well as religious scholars are not killed because of Iran, but because they are Pakistani Shia Muslims. The largest number of Shias killed in a single incident was much before the Islamic Revolution on 6th June 1963.

If the event is irrelevant for Pakistanis, they will not go there. If not, they will, like they did on 25th March 2012 at Nishtar Park in Karachi. No one is being forced to go. Those who will, shall be self-motivated.

Along with the doctors, lawyers, azadars, and many others whom you call “common Shias”, those martyred include many religious scholars, the 24th martyrdom anniversary of one of whom, Syed Arif Hussain al-Hussaini (a.r) will be observed by those attending the 1st July event.

I can cite the tradition, its asnaad, as well as the standing of the narrators through Rijaal, to prove what the actual tradition is, and who (including Bukhari) substituted the word Itrati/Ahle-Bayti with Sunnati and why! If Arif Hussain held a conference with the same name, who cares?

Arif Hussain was not masoom, he made many mistakes.In fact, his interview with Maliha Lodhi is surprising and enlightening enough not to be quoted. His ‘revolutionary balloon’ filled with Mehdi Hashmi gas (if you know what I mean) deflated as quickly as it was filled. Please don’t force me to say/reveal things I don’t want to

And the states/organizations/groups you are holding responsible (and rightly so) are not the ones being named in the write-up above, kindly read it again; and if you have shared it, own it. If you do not agree, then edit it.

And I am surprised you barely read my post. I said that these self-arrogated leaders are misleading people, and they can do it because they command respect and following. They have the pulpit, the cloak and the turban which automatically provide them a platform, a loudspeaker and a tongue which people listen to. If they keep propagating in favor of Iran and Iranian policies to the extent that they call Wilayat-e-Faqih a part of Usool-e-Din don’t you expect some people to follow them blindly?

I have been close enough to many of these people and I know them well, even their petty rivalries and groupings. Not that I am advocating in favor of buffoons like Abdul Hakim or Ghazanfar Taunswi etc either, but the ones who are educated enough should at least stop fooling the people and call a spade a spade. If they can’t tell the whole truth, they shouldn’t lie, and they should stop peddling Iran’s interests at the cost of our lives.