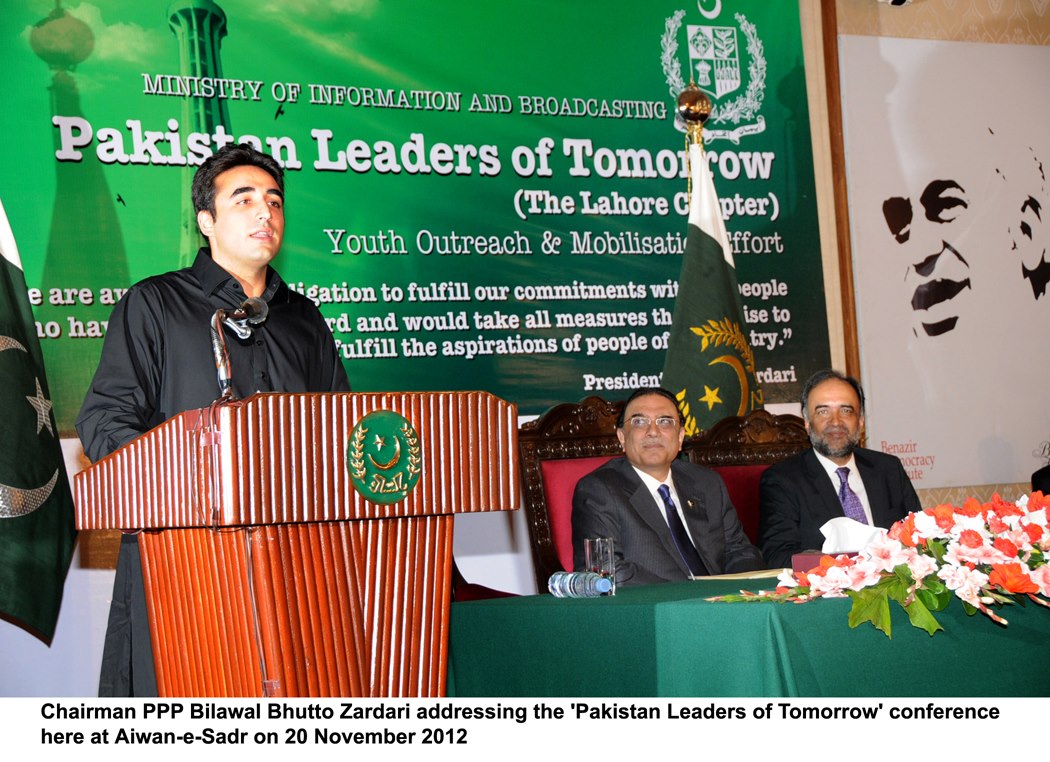 Today, I don’t initiate to pen as an emotional Pakistani nor as a die-hard PPP supporter. I commence to carve and phrase my letters as the youth of Pakistan – the building block of tomorrow’s safer and better Pakistan. Being one of the 65 % of the young population of my country, I have been perceiving the word ‘tomorrow’ – for myself – for almost the age of 13. At 13, I was called as a teenager and for my academic records, I have been ceaselessly hearing that: our ‘tomorrow’ (i.e. Pakistan’s future) would be bright as we have such brightening students within us ‘today’. But regrettably, at this moment, when I have almost finished the CRAZY teen years of my life – stepping in the 20s next year – I am told to stay away and wait for another ‘decade’ to be able to STAND in front of the world!!

How long this youth has to wait to BE the change? Would this ‘tomorrow’ ever come or it is merely an illusion in order to stifle and crush the new ideas?! Whatsoever it is – either misconception to distract us or the strategy to provoke us – the reality is that the prolonged wait for that bright tomorrow makes us lost into an obscure present where the plans for the future eventually fail…

Youth don’t want anything but simply leadership to stand with. BUT are those, claiming their-selves as the leaders of the youth, even aware of what this youth desires? Those ‘macho men’ conducting peace marches to the places where already peace has been prevailing CANNOT be the leaders! Those admirers of the vampires despite getting their own blood sucked by them through deadly attacks yet supporting their evil causes CANNOT be our leaders! Those distributing laptops, among students, for which no one is audacious to even charge them with the reported corruption scam, and setting Guinness world records for Pakistan rather than focusing on the existing issues CAN NEVER, be the leaders of this youth! Such cowards CANNOT be the cream of the crop!!

‘If you want your tomorrow to be yours, then begin from today’ – This is what I learnt last day while listening to the 24 year old Bilawal, in whose eyes I could perceive the passion to bring the ‘real change’ and whose utterances made our ‘today’ seem as beautiful as one can get. “We don’t need to wait for a messiah. We will be our own leaders. We will not wait for tomorrow when we can start today.” His statements clearly manifest his enthusiasm. Leader is the one we stand ‘with’ not the one we stand ‘behind’ whom. Our leader should be the one through whose voice, our words can be uttered and from whose actions, our ideas can be discerned. Our leader should be: the first to criticize when there is any viciousness – like the one going on in Gaza; the bravest to name the evil elements distorting the society; the most mature to guide those immature adults who are concentrating more on political aspirations rather on people’s ambitions. And whom I find fulfilling all the criteria to become the representative of this glimmering youth, that has given this country assets like Arfa, Ali Moeen, Shafay, Malala and all those children fighting with the menace of terrorism and extremism, is Bilawal – for he is among the youth, a part of this incredible sixty-five percent! Yes, it is just Bilawal Bhutto-Zardari… and ONLY HERE’s TO HOPE.

The young Bilawal – when looks into the eyes of super power (USA) and demands for the apology on Salala attack, ventures to declare TTP responsible for the suicide attacks, dares to intrepidly condemn the Israel’s aggression on Gaza, emphasizes us to be not the leaders of tomorrow but the leaders of today – he justifies being our leader. Despite being the youngest of all the politicians when he maturely invites all the adults to build consensus on the issue of terrorism, he becomes the perfect choice to be chosen from and for the youth.

I have seen him as the hope of Pakistan yesterday as he articulated our views and thoughts. I could see each Pakistani youngster standing in the presidency in his existence – for he is destined to be what this youth wants its leader to be.

Now I hope to see the next conference of ‘leaders of tomorrow’ to be re-titled as ‘leaders of today’. Bilawal has taught me to stand and become the leader of today, and if this extraordinarily talented and exceptionally daring young 65% population of Pakistan begins by today, then I am sure that, unlike us, our generations won’t have to beseech for their better tomorrow.

So, START FROM TODAY AND MAKE THE DIFFERENCE!