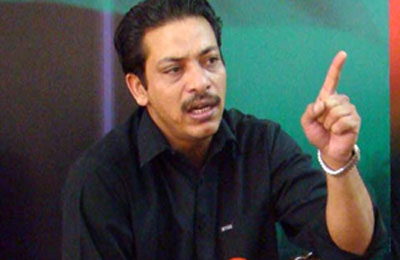 The following is a must watch speech (in Urdu) by Senator Faisal Raza Abidi (of Pakistan Peoples Party) against Takfiri Deobandi terrorists of Taliban and Sipah-e-Sahaba who are indiscriminately killing Sunni Barelvi Muslims, Shia Muslims, other communities, politicians, jawans of Pakistani army and Police etc.

The speech was delivered in Pakistan’s Senate two days ago in response to increasing attacks on Shia Muslims and Sunni Barelvi Muslims by Takfiri Deobandi terrorists.

Senator Abidi notes that Takfiri terrorists in Pakistan are not much different from those Takfiri Salafists who are attacking Sunni Sufi and Shia Muslim in Libya, Syria, Tunisia, Iraq, Afghanistan and other countries. He notes that such terrorists are often funded and sponsored by Saudi Arabia and other pro-Salafist sheikhdoms in Persian Gulf.

Senator Abidi also highlights the hypocrisy of pseudo-liberal, pseudo-secular elites who are misappropriating and misrepresenting Takfiris’ war against Shias and other communities as an issue of non-secular vs secular. He notes that while Sunni Sufi shrines and Shia Imam Bargahs are being particularly attacked by Takfiri Deobandis, the pseudo-secular elites’ organized catwalks and fashion shows are hardly touched. This, in other words, shows a connivance and some kind of understanding between the establishment sponsored Takfiris and the establishment sponsored urbane elites. No wonder, therefore, we see no explicit condemnation of Takfiri Deobandis by pseudo-liberal elites.
http://youtu.be/RcDRnml8sPc

If the youtube clip of this video is not accessible, readers can also access this video at http://www.facebook.com/ShiakillingMedia and http://www.youtube.com/user/shiakillingmedia.

Had it not been for social media, this important speech on the floor of the Senate might have recieved scant circulation.  Pakistan’s Pro Taliban corporate media has not given it the air time it deserves. On the contrary, this so-called “independant” media has buckled to the whims of the Judiciary and no longer invites Senator Abidi.

From Hamid Mir to Najam Sethi and their various fans, the media acts as cheer leaders for the Judiciary. Both the media and the Judiciary have played an instrumental part in promoting, justifying, releasing and enabling Jihadi terrorists.

Meanwhile, Pakistan’s chattering elites and celebrity NGO activists are too busy promoting themselves and wallowing in the nostalgia of a selective view of the past to really care about the ongoing Shia Genocide.