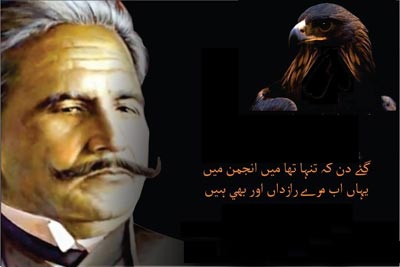 Sir Dr. Muhammad Iqbal is perhaps the most quoted Urdu poet of South Asia. He holds such a weighty stature in Urdu literature that few others even dream of attaining. As I said earlier in one of my articles, “Great people leave behind great legacies and the greater is the legacy, the greater are its claimants.” Thus, opportunists, progressives and conformists all equally claim his legacy.

As Iqbal died before the partition of Indian Sub-Continent, India and Pakistan both claim his legacy. However Pakistan has hijacked Iqbal by its huge industry on ‘Iqbal,’ so much so that nothing is left of his legacy for its alleged foe. Despite this wrestling match, it is an astounding ‘fact’ to learn that the ‘National Song’ of India was written by the ‘National Poet’ of Pakistan!

Since the ‘nationalization’ of Iqbal’s legacy during President Zia’s era, ‘Hazrat Allama’ Iqbal has become a holy cow in Pakistan. Being a wise poet-philosopher, Iqbal was the bridge ‘between progressive writers and Ghalib’. However Zia’s ‘Islamic Republic’ tried its best to transform him into being a bridge between Islam and Pakistan. The Zia dictatorship popularized this identification by popularizing terms like ‘Shayer-e-Mashiq’ (The Poet of East), ‘Qaomi Shayer’ (The National Poet), ‘Hakeem-ul-Umat’ (The Genius of Muslim Community), ‘Allama’ (Muslim Scholar), ‘Musawir-e-Pakistan’ (The Artist of Pakistan), ‘Mufaqir-e-Pakistan’ (Ideological Founder of Pakistan).

As a holy icon of patriotism in Pakistan ‘Iqbal’ has become a beautifully framed picture to which we bow once or twice a year. In fact guards installed by the government to keep watch on Iqbal’s mausoleum function to keep him beyond the reach of common person!

Other than Pakistan and India, Iqbal’s legacy is equally popular in Iran. In Iran, ‘Iqbal Lahori’ is a household name. According to Sayyid Ali Khamenei, Iranian people were “the first foreign addressees of Iqbal”. A person from Lahore went to Iran and stayed there as a part of his job. In his letter to Daily Times, he wrote, “I was surprised to discover that our national poet, Dr Allama Iqbal, is very popular and well known in every strata of Iranian society. Almost everyone, from children to adults, from a taxi driver to an executive in an office, all know some verses by Allama Iqbal in Farsi.”

Many leftists also claim his legacy, particularly citing masterpieces like ‘Karl Marx Ki Awaz’, ‘Bolshevik Roos’, ‘Saqi Nama’, ‘Iblees Ki Majlis-e-Shoora’, ‘Sarmaya o Mehnat’, ‘Lenin Khuda Ke Huzoor Maen’, ‘Farishtay Khuda Se’and ‘Khuda Farishton Se’. Thus if at one side, Junaid Jamshed is singing Iqbal’s verses to stimulate the political unconsciousness of masses then on the other side Taimur Rahman is stirring the political consciousness of the masses while singing the verses of the very ‘Iqbal’!

However the most curious claimants of Iqbal’s legacy are the ‘mullah community’ and the orthodox Muslims. In fact no other Urdu poet of British India had such controversial relations

with them as Iqbal had. (Prior to Iqbal it was mostly the Punjabi Sufis, notably the celebrated poet Bulleh Shah, who took the orthodoxy of Islam with cold hands.)

Urdu poetry was famous for its serenity, romanticism and aesthetics but Iqbal attacked the beliefs of orthodox Muslims with vehemence and yet in so gallant a fashion. Isn’t it Iqbal himself who proclaimed, “Na abla e masjid hoon na tehzeeb ka farzand”! Whether it was the writing of ‘Shikwah’ (Complaint) of ‘Bang-e-Dara,’ the attack on the Persian sage Hafiz in his musanwi ‘Israr-e-Khudi,’ the reception of knighthood from British Empire or support for Ibn-e-Saud, the grave digger of the Ottoman Empire, Iqbal wrote completely contrary to the general viewpoint of the Muslim community. Thus some mullahs (clergies) didn’t hesitate to declare him an “apostate”, “heretic” and “infidel”. Despite all this, many mullahs frequently quote him in their commentaries and speeches, today.

Even among mullahs, the self-proclaimed proponents of ‘one Ummah’, one can find some very conflicting claims regarding Iqbal. To mainstream Muslims, he was a non-Ahmadi Muslim but to Lahore’s Ahmadi clergies ‘Iqbal held the Ahmadiyya Movement in the highest admiration and praised it openly’, his ‘religious views derived from Ahmadiyya thought’ and he ‘took the pledge of Mirza sahib’. What could be more ironical that for some, he was the follower of Islamic revisionist Mirza Ghulam Ahmad of Qadian, for some he was a supporter of fascist Mussolini of Italy, for some he was the fan of imperialist Queen Victoria of Britain and for some he was the advocate of communist Lenin of Bolshevik Russia. Isn’t all this depicting him a ‘confused poet’? Certainly not, if I’m asked! He was wise enough to leave a rational response to all such queries. “Slavery is a great curse. It causes one to say things, deliberately as well as unintentionally, which one does not want to”, Iqbal writes. Here by slavery he meant poverty, that is, economic slavery.

Seeing so many people from different, sometimes even opposing, schools of thought all claiming his legacy, it can be said that Faiz was quite right when he said, “there is no poet who is more mazloom (subjugated) than Iqbal”.

Who can win this “tug-of-war”? If the denationalization of Iqbal doesn’t begin soon, all but Iqbal!