Home  »  Featured • Original Articles   »   18 October 2007: The return of a Benazir leader to her Benazir people – by Maleeha Manzoor 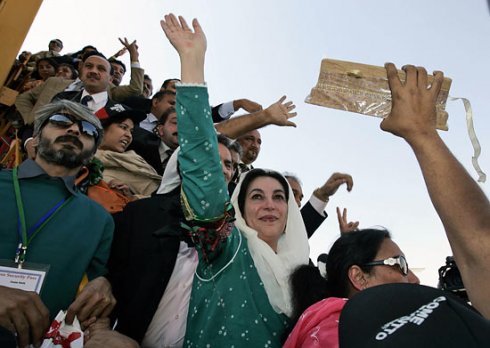 “I am returning to Pakistan on Oct. 18 to bring change to my country. Pakistan’s future viability, stability and security lie in empowering its people and building political institutions.” – Shaheed Mohtarma Benazir Bhutto

The wearisome eight years, as those of detention, and eventually a day signifying the anticipation of emancipation… It was the October 18, 2007 – when the sun rose with a fickle of hope, glimmering in a different manner, rebelling against the ‘wrong’ and vouching for Pakistan that could be better. The incredible ocean of people, on the streets of Karachi, with the hearts painted with colors of rejoice gathered outside the Jinnah International Airport to welcome Bhutto’s daughter; the leader of the masses; the hope of the nation: Benazir Bhutto.

The tranquility on her face while arriving at her soil is too hard to enfold – too mysterious to expose. Her face shone in the manner it hadn’t had before. Her raising hands, clapping on the tunes of party songs and waving to answer the slogans, was equal to breathing life into the masses. The years of confinement had made her more powerful; the threats, the menace, the hostility and the animosity from all sides could not deter her – nor could silence. Despite receiving threats to life, she rejected to restrain herself and remain in exile, and came to reach out to the people, for she was the ruler – ruler of the hearts.

“When my flight lands in Pakistan next month, I know I will be greeted with joy by the people.” Yes, she knew and she proved out to be true!

LIKE LEADER, LIKE PEOPLE. The atmosphere echoed with the slogans of‘Jiyay Bhutto’ and ‘Wazeer-e-Azam Benazir’ as she landed on her land. Black, red and green were the only colors that could be seen and dancing on the tunes of Dila Teer Bija, people welcomed their leader dressed up in green – on that momentous October Eighteen. The eyes of jiyalas hazed along with the misty eyes of their leader and the millions lifted up their hands when she raised hers to thank Almighty Allah; The catchword ‘Benazir ayi hai, inqalaab layi hai’ exhibited their confidence and faith on her – it was the greeting she had spoken about – it was the love she had claimed about.

Unfortunately, whether it is the era of Shaheed Zulfiqar Ali Bhutto or that of Shaheed Mohtarma Benazir Bhutto, the ‘red’ of Pakistan Peoples Party’s flag has always depicted its specialty of signifying the blood it has shed for the revival of democracy and yet again the savagery of evil forces continued: the joyous day ended with the rare impact of woe and heavy blasts cost the lives of over 150 ‘jaanisaran-e-benazir’, who had hemmed in Bibi to save her – to save Pakistan. Putting their lives in danger, they saved their leader proving their ‘Benazir-ism’ and undying support to their sister: the ‘Rani (Queen) of Pakistan’. I still remember the statement of a mother after losing her only son in the Karsaz tragedy:

“If I had had ten sons, I would have sacrificed all on Benazir…”

This was the intensity of love that one would have found nowhere else, dare I say! And the essence of blood still can be felt there at the Karsaz, where brothers were slaughtered for protecting their sister!!!

The love of people to Benazir and hers to the people is what one cannot wrap up in the millions of words. Even having scrutiny on all the dictionaries, one cannot find the words to depict this immense love! The pang of losing the loyal workers still pinches the leadership of Pakistan Peoples Party. PPP has been more than a political party for the masses, it is a faith that each democracy lover has on the democratic system. History is evident that no example is bigger than that of  18th October; 2007, for it was the show of strength and love – the return of a Benazir Leader for her Benazir people.

We will never forget you Benazir Bhutto. Nara-e-Haideri – Ya Ali