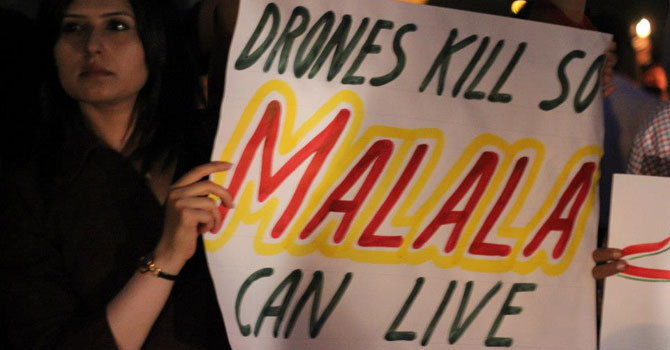 In his book ‘Inside Al Qaeda and the Taliban’, slain journalist Syed Saleem Shehzad who spent considerable part of his research with al Qaeda militants, described comprehensively the formation of the new al Qaeda players and their strategic objectives in the lawless FATA region of Pakistan after the crippling defeat of the Taliban and al Qaeda in 2001.

He magnificently illustrates this al Qaeda strategy in well-crafted 3 points:

In order to achieve this strategy, al Qaeda annihilated the centuries-old Pakistani tribal structure and traditions by killing thousands of tribal elders as well as clerics and launched a new generation of militants. However during this time Al Qaeda’s objectives were constantly under assault because mostly whenever a new leader was nominated and trained, he was eradicated by the formidable drone. This notorious drone is known to have successfully struck down not only the key al Qaeda and Taliban operatives but also fugitives responsible for hijacking of Pan American World Airways Flight 73 and 1998 United States Embassy Bombings.

According to The Bureau of Investigative Journalism, since the outset, there have been a total of 349 drone strikes in Pakistan to date, killing approximately 3300 people of which 500-800 are estimated to be civilians and this estimation has also been credited by the Stanford/NYU Clinics in ‘Living Under Drones’, a recent report heavily critical of the drones which was commissioned by London-based charity Reprieve that represents Guantanamo Bay prisoners .

In the following article I will critically analyze:

‘Living Under Drones’, the report prepared by researchers from Stanford and New York University law schools created mass hysteria in Pakistan after it revealed that drones terrorise civilians and are counter-productive. The print and electronic media along with cacophonic talk shows exploited this further to fuel the already mounting anti-Americanism and became an important tool in precipitating the hype surrounding the “Peace March” against drones organised by Imran Khan. However the report has various fundamental flaws which have been largely overlooked and which can raise grave concerns regarding its credibility.

Firstly this report cannot be considered impartial as claimed by Stanford/ NYU since their researchers were unable to directly access FATA to meet the affected victims due to the heavily guarded checkpoints established for security. Instead, they substantially relied on an Islamabad based Foundation for Fundamental Rights (FFR) for arranging interviews with drone strike victims. This created a conflict of interest between the FFR and the researchers, since FFR is a known legal advocate for drone victims in Pakistan. It would only be logical to presume that they would be inclined against the drones and would present evidence only to support their perspective and not of those residents who are in favor of it.

In addition to this, another issue which arises is what mechanism was adopted to ensure that the victims were really victims of drone strikes since there is a strong possibility that these victims were injured by other blasts such as those from F-16 and JF-17 used during Operation Rah-e-Nijat, which was launched by the Pakistan military in South Waziristan.

How do the victims ascertain that the strike they experienced or witnessed was actually from a drone rather than a PAF’s fighter air craft?

Moreover, the report mentions it faced a challenge in assessing the true opinions of the affectees who were reluctant speaking to foreigners about issues raised in this report from fear of vengeance from all quarters such as the Pakistani military, intelligence services, and the non-state armed groups.

Bearing this is mind, was there any process whereby the researchers ensured that the interviewees were not impacted by this same fear?

Secondly, FFR which facilitated this report is headed by Advocate Mirza Shahzad Akhbar, a practicing lawyer and lecturer at IIU who is known for his support of the Taliban. “Shahzad is a patriot and holds the United States entirely responsible for the menace in Pakistan” revealed an inside source from Shahzad’s employer, Farooq Law Associates, who spoke to me on condition of anonymity “He holds the Taliban as a legitimate resistance against the American imperialism.”

Most important of all, Shahzad is the same person who blew the cover of the CIA station chief, Jonathan Banks, in Pakistan in a press conference two years ago; it seems almost effortless the ease with which a mere practicing lawyer in Pakistan knows the identity of CIA’s station chief which is always a highly confidential information in any country. It is likely that elements within Pakistan’s security establishment were feeding Shahzad this information as he was working on an agenda provided by them.

If Shahzad’s concerns for the drone strike victims were truly so genuine he could have advised his clientele to sue the government of Pakistan and Armed Forces instead, since that is where the blame lies as they were facilitating these attacks in broad daylight by allowing Americans to use the Shamsi airbase until April 2011 to launch drone operations.

As it turns out this whole report boils down to the fact that it was prepared based on the information provided by the FFR and the only part played by the Stanford/NYU was more or less confined to designing and drafting of the report.

The timing of the release of this report cannot be dismissed either since Shahzad who helped assemble the data for the report also played a crucial role in managing Codepink activists who helped score a lot of attention internationally at the Peace March.

Coming to the second part of my analysis, the graphs below may be examined to assess the effectiveness and productivity of drone strikes:

The above graph illustrates the casualty breakdown of civilians and terrorists in drone strikes. The key point to note here is the outstanding decrease in civilian casualties in the last three years. The strikes increased dramatically after Barak Obama took office in 2009 but due to the adoption of remarkable precision levels and effective ground intelligence, the civilian casualty rate dropped to a mere 3 per cent by 2012.

Although even 3 per cent of civilian casualties are highly condemnable, this should not be seen in isolation, one must see the bigger picture and recognise the substantial impact of these strikes in reducing terror attacks in Pakistan which has inflicted thousands of casualties.

Here is some graphical data to support this viewpoint:

There are some key features that these two graphs represent.

Firstly, there is no evidence to support the popular mantra in Pakistan that drones fuel terrorist attacks. Contrary to popular beliefs, drone strikes have proved to be a crucial tool in reducing terrorism as can be seen from the graphs above. The year 2009 witnessed 54 drone strikes killing 570 terrorists and 150 civilians, versus 2010, where 122 strikes resulted in 900 terrorist and 74 civilian casualties. Nevertheless, 2009 was the deadliest year for Pakistan where 1,700 civilians died due to suicide attacks alone, along with other 1,600 casualties who were victims of ethnic violence, sectarian killings, accidental blasts and target killings. Furthermore, 2011 – 2012 experienced roughly the same levels of drone strikes as those of 2009 however, the difference is evident in the significant decrease in casualties from terrorist attacks of about 36 per cent to 55 per cent respectively. This correlation between drone strikes and terrorist casualties becomes more compelling when it comes to major cities in Pakistan where terrorist casualties have fallen by a marked 86 per cent by this year since 2009 despite the greater number of drone strikes in consequent years.

Looking at additional evidence, there are some ground realities which simply cannot be ignored and which strongly support drones as extremely effective against Pakistani suicide attacks. Between 2009 -2012, these strikes have caused severe damage to TTP and other Al Qaeda operatives who were assigned to destabilise Pakistan. Some top strategists, operational commanders, ideological mentors and recruiters were eliminated in these strikes.

Baitullah Mehsud: Top TTP leader who commanded up to 5,000 fighters and was responsible for killing thousands of Pakistanis in suicide attacks.

Tohir Yuldashev: Uzbek leader and ideological mentor of Baitullah Mehsud and Abdullah Mehsud who recruited up to 2,500 fighters in FATA and taught them brutal terror tactics to fight Pakistan army and Nato forces in Afghanistan.

Qari Zafar: Leader of LeJ who carried out attacks on FIA offices in Lahore.

Ilyas Kashmiri: Al Qaeda’s top strategist and leader of 313 Brigade who not only planned to assassinate Pakistani  General Ashfaq Parvez Kayani but also presented the idea of Mumbai attacks to al Qaeda in order to divert Pakistani forces from its western borders. The plan was later executed by former SSG Pakistan Army commando, Major Haroon Ashiq with operational support from Hafiz Saeed.

The fierce drone campaign against TTP and other fighters have greatly benefited Pakistan as it has caused leadership and strategic crisis among terrorists, depriving them of strategists, plotters, and fighters that eventually resulted in massive overall reduction of suicide attacks in Pakistan.

Although there has been a recent rise in sectarian killings of Shias particularly the Hazara community in Pakistan, this sectarian cleansing campaign has different dynamics and contexts which are explained in my recent article Hazara Holocaust and the Deafening Pakistani Silence.

In the end, it turns out that drones do not fuel terrorism in Pakistan as promoted by the local media, Imran Khan and other political leaders who thrive on anti-Americanism and spread lies by showing sham and bogus pictures of drone victims. The criticism against drone strikes by Stanford/NYU report is totally baseless since it was not a fact finding commission but instead a fall semester university project that relied for key information on partisan characters like Mirza Shahzad Akbar.

What fuels terrorism in Pakistan is its dubious policy against Taliban and the peace deals that it signed with the terrorists post 9/11. These peace deals ended up giving much needed breathing space to terrorists who have been exploiting these to their advantage to launch attacks in Afghanistan and Pakistan. The peace agreements have been so ill-conceived that they did not even provide basic provisions against cross border infiltration of militants or the compulsory surrender of weapons.

Despite this aggressive supporters of these agreements such as Imran Khan continue to deceive the public by calling it the solution against terrorism and by linking it to the Northern Ireland peace process (Belfast Agreement). What these people fail to tell the public is that this peace process was only made possible after the successful process of “Decommissioning” where an Independent International Commission was formed in order to supervise the surrender of weapons by Irish Republican Army. One can never expect Taliban and al Qaeda to adopt “Decommissioning” since their ideology and struggle is religiously motivated unlike the IRA conflict.

Since the agenda of Taliban/al Qaeda is to forcefully implement their puritanical sharia and exploit peace deals to regain strategic strength, Pakistan has no option other than to declare an all-out war against them. However the drone technology is only viable as a short term solution because the war in Pakistan is an ideological one and winning it in the long run means ensuring against the rise of future terrorists by creating and promoting a counter ideology. Until then it seems, the drones are here to stay.

It’s about time Pakistan wakes up to the strategic advantages of drone strikes and identify its role in curtailing terrorism instead of choosing to selectively criticize  them whenever “Good Taliban” are targeted- who continue to send fighters in Afghanistan to fight Nato troops such as Hafiz Gul Bahadur, Maulvi Nazir and Haqqani Network.

Pakistan, being a vital non-Nato ally, must treat all Taliban as one, while allowing these strikes unabated, and stop decrying sovereignty issues because sovereignty, if Pakistan still has one, is foremost being violated by Taliban and Al Qaeda.

As a banner during a protest aptly portrays ‘Drones kill, so Malala can live’. This should be Pakistan’s philosophy in order to avoid future incidents which aim at crushing the very spirit of Pakistan by targeting a 14-year-old beacon of light, Malala Yousufzai.

The writer is an investigative Counter Terrorism Analyst. He blogs at aacounterterror.wordpress.com and tweets at @Anas_Abbas1.