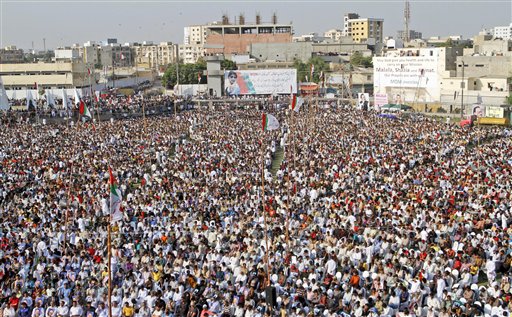 Tens of thousands rallied in Pakistan’s largest city (Karachi) Sunday 14 October 2012 in the biggest show of support yet for a 14-year-old girl (Malala) who was shot and seriously wounded by the Taliban for promoting girls’ education and criticizing the militant group.

But protests against the shooting have been relatively small until now, usually attracting no more than a few hundred people.

One of the exceptions is the political party that organized Sunday’s rally in the southern port city of Karachi, the Muttahida Quami Movement. The party’s chief, Altaf Hussain, criticized both Islamic and other mainstream political parties for failing to organize rallies to protest the attack on Malala.

He called the Taliban gunmen who shot the girl “beasts” and said it was an attack on “the ideology of Pakistan.”

“Malala Yousufzai is a beacon of knowledge. She is the daughter of the nation,” Hussain told the audience by telephone from London, where he is in self-imposed exile because of legal cases pending against him in Pakistan. His party is strongest in Karachi.

Many of the demonstrators carried the young girl’s picture and banners praising her bravery and expressing solidarity.

The leaders of Pakistan’s main Islamic parties (PTI, PML-N, JI, ASWJ-LeJ etc) have criticized the shooting, but have also tried to redirect the conversation away from Taliban violence and toward civilian casualties from US drone attacks.

The young girl was shot in the neck, and the bullet headed toward her spine. Two of her classmates were also wounded in the attack.

“May I ask where are Pakistan’s armed forces and its high-ranking (military) personnel who utilise up to 80 per cent of the country’s resources?” Hussain said while addressing a rally in Karachi on phone from London, where he is in self-imposed exile.

Altaf Hussain asked Pakistan army, “how many jawaans (youths) it needs to curb terrorists from Pakistan, MQM will provide.”

He wondered if the army confused on this issue or under some kind of pressure. He questioned the role of Army in protecting Pakistani civilians, despite taking a major chunk of our budget.

Condemning last week’s brutal attack on 14-year-old Malala by Taliban fighters, he asked why the security forces had not taken steps to protect the people of Pakistan and to eliminate terrorism.

Hussain also directed his criticism towards Islamic clerics and scholars, saying very few of them were spreading the real teachings of Islam or highlighting the importance of education.

Most of the ‘ulema’ (clerics) were “religious thugs” whose agenda is to “sell Islam”, he said.

He condemned muftis and mullahs who did not speak out against the attack on Malala and said he would pray to God to punish them.

On the other hand, he praised a group of clerics who had issued a fatwa against the attack on Malala, who continues to be in an intensive care unit of a military hospital in Rawalpindi.

Hussain became the first leading Pakistani politician to openly name the Taliban while condemning the attack on Malala.

Though the attack has also been condemned by leaders like the Prime Minister and the army chief, none of them named the Taliban in their public remarks while calling for action against militants.

The rally held by the MQM at Jinnah Ground was the largest event organised so far in support of Malala and was attended by tens of thousands.

The people, he said, will have to decide if they want the “Pakistan of (Mohammad Ali) Jinnah or the Pakistan of the Taliban”.

Hussain warned that if the army and intelligence agencies failed to act against militants, the people would be “forced to look towards the international community to save their children”.

He urged NGOs, civil society and ordinary people to come forward to help create a liberal, tolerant and progressive Pakistan.

Taliban are inhumane, illiterate and people from the stone-age, said Muttahida Qaumi Movement chief Altaf Hussain on Sunday in Karachi. Hussain was addressing the participants of a conference held in honour of Malala Yousafzai.

Hussain said that if the armed forces fail to apprehend these culprits, then the nation will be left with no other option but to look towards the international community for the safety of their children. “May I ask where are Pakistan’s armed forces, and its high-ranking personnel who utilise up to 80% of the country’s resources?” the MQM chief questioned.

He further questioned the role of the political and religious parties. “Why are they quiet, why don’t they fight against the Taliban?” he stressed. “See their wealth, their property; see how much they have gained through politics. Unfortunately, they are not fulfilling their national obligations and responsibilities,” he said.

Calling Malala a beacon of hope for millions of girls in Pakistan, Hussain asked if acquiring education was a crime.
He further said that the Taliban’s stance on female education was against the teachings of Prophet Muhammad (PBUH).
Hussain added that there are very few religious scholars who preach the correct version of the religion, while the rest are all “religious thugs” whose agenda is to “sell Islam”.

“I am humbly requesting all the genuine religious leaders and scholars to speak up now. It is your duty. If you remain silent then you are similar to the terrorists,” he said. Speaking about the injustices taking place in the country, the MQM chief said that his party has always condemned oppression regardless of the consequences – be it the attack on Malala, the blasphemy case against Rimsha Masih or attacks on churches and temples.

The MQM chief called on Chief Justice Iftikhar Muhammad Chaudhry to take suo motu notice of the brazen attack on Malala. “We don’t want a favour, we want justice,” he said.

He also urged CJ to watch the video of (PML-N, PTI, JI, ASWJ etc) lawyers who garlanded Maloon Mumtaz Qadri (killer of Shaheed Salmaan Taseer) and take action against them.

While speaking to the gathering, MQM Deputy Convener Dr Farooq Sattar said the event is the first step in a movement to mobilise people against extremism and militancy. He stated that Quaid-e-Azam’s Pakistan is engulfing into the darkness and everyone needs to unite in order to save it. Commenting on the attack on Malala, Sattar said that it was an attack on Jinnah’s Pakistan, Allama Iqbal’s vision and the ideology of the country. “The attack on Malala was an attack on Pakistan’s conscience,” he stressed. He further said that a handful of militants wanted to enforce their way of life on the people of Pakistan.

Karachi says yes to Malala, no to Taliban

Tens of thousands of Pakistanis held a demonstration in Karachi on Sunday in support of a 14-year-old human rights campaigner and peace activist shot and critically wounded by the Taliban for promoting girls’ education and criticizing the extremist group.

The demonstration was the largest by far since Malala Yousufzai and two classmates were shot on October 9 while returning home from school, The Associated Press reported. The demonstration was organized by the most powerful political party in Karachi, the Muttahida Quami Movement (MQM). The party’s chief, Altaf Hussain, addressed the audience by telephone from London, where is he in self-imposed exile.

Hussain called the Taliban gunmen who attacked Yousufzai “beasts” and said the shooting was an attack on “the ideology of Pakistan.” “Malala Yousufzai is a beacon of knowledge. She is the daughter of the nation,” he added.

The demonstrators carried the young girl’s picture and banners praising her bravery.

Tehrik-e Taliban Pakistan (TTP) spokesman Ehsanullah Ehsan said that the militants attacked Malala because she was anti-Taliban, adding that she would not be spared. “She was pro-West, she was speaking against Taliban,” Ehsan said by telephone from a secret location. “She was young but she was promoting Western culture in Pashtun areas,” he said, referring to the main ethnic group in northwest Pakistan and southern and eastern Afghanistan.

On Friday, at mosques, churches, and schools across the country, Pakistanis observed a day of prayers for the speedy recovery of the young activist.

In 2008 and 2009, the TTP banned female education in the Swat Valley, depriving more than 40,000 girls of education. TTP militants destroyed hundreds of schools in the valley during a campaign of violence over the course of the two years, which led to a dramatic decline in the number of girls enrolled in schools in the region.

In 2009, Malala Yousufzai rose to fame for writing about life in the Swat Valley under the TTP. She later received Pakistan’s National Peace Award for bravery and was also nominated for an international children’s peace award.

Altaf Hussain also demanded that the Ulema and religious scholars in the country take a strong stance against the Taliban. He said that if they did not speak out more fervently against religious extremism, then they will be regarded as having sympathy for terrorists.

The gunshot that united a nation

ISLAMABAD – A 14-year-old Pakistani girl who was shot by the Taliban – after defiantly speaking out about the importance of education for girls and criticising the militant group – has united a nation, with rallies and prayers held in mosques, churches, schools and on the streets of Karachi, Pakistan’s largest city.

Tens of thousands took to the streets yesterday in support of teen blogger Malala Yousufzai who was shot by the Taliban as she was returning home from school. Two of her classmates were also wounded, but not seriously. The rally was organised by the most powerful political party in Karachi, the Muttahida Quami Movement, whose leader Altaf Hussain called the Taliban gunmen who attacked Malala “beasts” and said the shooting was an attack on “the ideology of Pakistan”. Many of the demonstrators carried the young girl’s picture and banners praising her bravery.

‘Will back army action against Taliban’

Muttahida Qaumi Movement (MQM) Chief Altaf Hussain has termed terrorists as inhuman and said his party would support an army action against the Taliban. “If we want Quaid-e-Azam’s Pakistan, we will have to stand up against the Taliban,” Hussain said while addressing the general workers meeting at the Jinnah Ground via telephone from London.

Altaf eulogized Malala and said that raising voice for education in Taliban strongholds is a “courageous act.” “Those who attacked young Malala are not humans; they are beasts,” he snapped. The MQM Chief added that nations change their fate themselves and we have to move forward despite all the challenges. Altaf asked why some of the political and religious parties are still keeping mum on the attack on Malala Yousafzai. “This silence is beyond comprehension,” he added.