You can kill a man, but not an idea – by Maleeha Manzoor 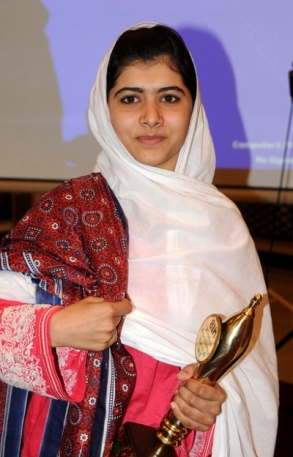 “I am what the terrorists most fear” – the anecdote of valor is chronicled in the chapters of history extolling the valiance of my leader Shaheed Mohtarma Benazir Bhutto, who gazed into the eyes of terrorism to rend it from the origins of her soil that has the essence of young blood of its soldiers and citizens in it.

I stand in daze – what to exhibit: either to bewail on what we have lost or cheer on how they (terrorists) have failed. Endeavoring to mold  a regressive society – where the beacon of progression i.e education could not be equipped to the women who form the cement-binding base of any society – the barbaric mindset killed my Bibi so that there would be no other Benazir to grasp and lift up the flag of a liberal and learned Pakistan. Fortuitously, that mindset failed… It has been deteriorated as Benazir continues to live on; it has been crumbled as Bibi’s vision subsists on in the face of Malala Yousafzai: a child rights activist, National Peace Award winner and a 14-year old girl that frightens the terrorists with her manifesto to be, as well as make her fellows, educated.

“I want to become a lawyer and then a politician… Benazir Bhutto is my ideal, she spoke for Swat people, vowed to wave Pakistan flag there.” Only the youth of Pakistan can articulate this way that has seen its country burning in the hell of extremism and terrorism. Malala’s utterances explicit the existence of the vision of my martyred leader who sacrificed for the future of the millions like Malala.

Through her legacy, my Bibi has defeated the ones who commiserate with the savage mindset that has trapped Islam in a bad picture. Despite taking numerous young lives marching towards a secure Pakistan, terrorism could not silence the audacious voices and is threatened by each Pakistani children. Malala is the voice of a progressive Pakistan. When you cannot suppress the voice of a little child, how can you execute the legacy of Benazir Bhutto? This is the loss of that barbaric mindset that today, almost after the five years of Bibi’s assassination, Bibi lives on and her daughters have now started to threaten the extremists. By attacking Malala, the followers of remorseless mentality have proved how disturbing is every Pakistani child to them and they must be compelled with guilt to know that even children can defeat their mindset!

It is now proved that YOU CAN KILL A MAN, BUT NOT AN IDEA!!! Bibi lives on in the hearts and minds of her children. Whatever you do, you cannot cease us from carrying forward her mission of a BENAZIR PAKISTAN!

My sister, Malala, through her recovery, will signify the defeat of evil mindset that snatched our Shaheed Rani from us – InshaAllah! Get well soon love! This sister awaits to see you back in action!

3 responses to “You can kill a man, but not an idea – by Maleeha Manzoor”