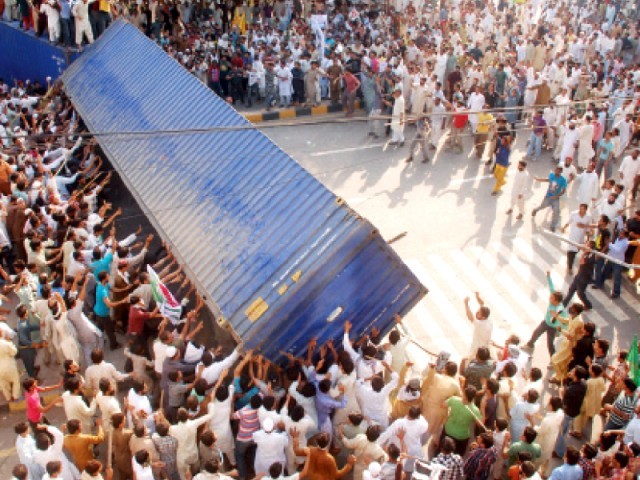 Thousands of cellphone subscribers in Pakistan received an anonymous text message recently announcing a miracle: an earthquake on Tuesday, Sept 18, had destroyed the Washington, D.C. movie theater that was exhibiting ÎInnocence of Muslimsâ, the controversial film that has triggered violent protests in several Muslim countries. An email version of the text message even included a picture of a mangled structure. Allah, the texter claimed, had shown His anger against the movieâs insult to Islam and Prophet Muhammad, and with Him on their side the faithful should not be afraid to vent their anger against the West, which belittles Islam and abuses Islamâs prophet.

There was, of course, no earthquake in Washington, and no movie theater had been destroyed. In fact, the movie has never made its way beyond YouTube. But for several days, the fabricated text message and email made the rounds, forwarded and reforwarded around Pakistan and in some cases to Pakistanis living in the diaspora. It was part of a campaign to arouse Muslim passions by what author Salman Rushdie has termed ãthe outrage industry.ä Similar false mass messaging convinced millions after 9/11 that Jews had been warned to stay away from the Twin Towers, implying a conspiracy that many still believe without a shred of evidence. Last year, after U.S. special forces killed Osama bin Laden, anonymous messages suggested that the raid in Abbottabad was a staged event and bin Laden had been killed months earlier.

Such well-organized manipulation of sentiment belies the notion that orchestrated protests are spontaneous expressions of Muslim rage. Like followers of any other religion, Muslims do not like insults to their faith or to their prophet. But the protests that make the headlines are the function of politics, not religion. Hoping to avoid being accused of siding with blasphemers, the Pakistani government tried to align itself with the protestersâ cause by declaring a public holiday and calling it ãLove of the Prophet Day.ä Although 95 percent of Pakistanâs 190 million people are Muslim, only an estimated 45,000 actually took part in that Fridayâs demonstrations around the country against ÎInnocence of Muslimsâ. The protests mattered largely because of their violence: as many as 17 people were killed and scores injured.

Men of religion have often slandered each otherâs faiths. Islam has endured its share of criticism and abuse over the centuries, especially from Christians, against whom they fought for control of the Levant and the southern corners of Europe during the Crusades and the Ottoman wars. The 14th-century Byzantine emperor Manuel II Palaeologus hurled the ultimate insult at Muslims when he declared that everything Muhammad brought was evil, ãsuch as his command to spread by the sword the faith he preached.ä Historically, Muslims returned the favor by pointing out the flaws in other religions and outlining their own perfect faith. Muslim emperors ruled over large non-Muslim populations while Muslim preachers and Sufi mystics worked to proselytize and win converts to Islam. But there is no record in those days of mob violence against foreign envoys or traders in retaliation for blasphemy against Muhammad or Islam allegedly committed by Islamâs enemies in distant lands.

The phenomenon of outrage over insults to Islam and its final prophet is a function of modern-era politics. It started during Western colonial rule, with Muslim politicians seeking issues to mobilize their constituents. Secular leaders focused on opposing foreign domination, and Islamists emerged to claim that Islam is not merely a religion but also a political ideology. Threats to the faith became a rallying cry for the Islamists, who sought wedge issues to define their political agenda. To this day, Islamists are often the ones who draw attention to otherwise obscure attacks on Islam and then use those attacks to muster popular support. The effort is often aided by Islamophobes hoping to create their own wedges by portraying Islam as a threat to Western civilization. Conservative and practising Muslims who are not Islamists are caught in the middle, along with scholarly commentators on Islamic history and tradition who are not Islamophobes.

The past two decades have seen periodic outbreaks of protest over insults to Prophet Muhammad and Islam. In each case, the protesters were not reacting to something they had seen or read in the ordinary course of life. With the exception of The Satanic Verses, none of the objects of complaint were even widely accessible until the public was whipped into a fury.

The Islamists first introduced the objectionable material to their audience and then instigated the outrage by characterizing it as part of a supposed worldwide conspiracy to denigrate Islam.

The emergence of social media and the swiftness of international communications have made it easier to choreograph global campaigns, and in Muslim-majority countries, Islamists tend to be among those who are most effectively organized to take advantage of technology for political ends.