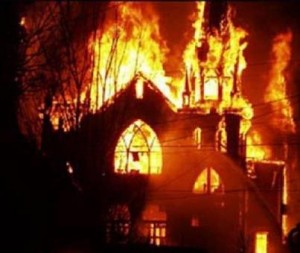 Things bring me to dance at your idiocy.
Not really, that’s blasphemy.

let’s rob a bank, smash a car
And kill a person or two.

Such intensity is in my love,
Yet I defy mysticism.
And I abhor human love too.

But,
Let’s make the guy richer now
For making a film
exposing our innocence
To the world.
Which was unnecessary

I must say this irony is not in your essence
But it is just me, proudly following

In whatever direction your bloody innocent
Mob takes me.

And you can see a smile on my face,
But what the hell am I really doing?
I have no idea.

They just tell me it is Ishq e Rasool
And so I believe, it is such.

In a country full of contradictions, paradoxes and jingoistic puzzles, one can’t help but wonder at the countless directions we are headed towards, but what one really does not realize is the frozen moment we find ourselves caught in, and that is the moment of absolute reality if you find yourself trapped in it. I have experienced the intensity of fear, desperation and helplessness, and when I found myself facing an imminent attack, as death nakedly staring directly at me in my face, all my ideologies, convictions and my courage which I always pretended or boasted to keep, evaporated in a millisecond of that moment. I was not a Muslim, or a Christian , or a Hindu, or an Atheist anymore. I was just a helpless being, waiting for what was destined for me. I never felt so human before, and so vulnerable over the sanctity of my life that held no value to the angry mobs who came running towards my car with sticks and torches. And it was the time I realized, how cheap is the cost of my life, as I raced away protecting it.

It was a Friday morning, the day that was to observe the love of the Prophet (P.B.U.H), but rather than sending out a message of love and respect for Him, it became a nightmare for all. I had witnessed the crowds running in waves, little children who started throwing rocks at every passing car, all the youth that came smashing every window of the shops in the bazaar, and the clerics who blocked all the roads entering Islamabad. I had witnessed the expression on their faces, as if it was something sacred they were doing, some even cheered at their acts of vandalism, others just joined in for fun, making the light of the situation that the State allowed them by making Friday a public holiday to protest the meager, third-rate film production that was deliberated to incite Muslim sentiments. And how “Innocently” the Muslims behaved that day, leaving 20 people dead in Karachi, countless injured in riots and police shelling that came out to late to control the looting and vandalism, and properties destroyed estimating in millions. Many tried entering the Diplomatic Enclave, a portion exclusively designated for all the foreign missions and embassies in Islamabad, but thankfully, they weren’t able to enter, thus the country narrowly survived an international diplomatic disaster by exposing its full State failure to the world. The worst came when reports started trickling down of attacks on places of worship of others, including two Ahmadiyya mosques and the torching of a Lutheran Church in the district of Mardan. This was the love of the Prophet that was shown that day. And who is to be blamed for further defamation of the religion that day?

The State reaction came too late to contain the situation. The subsequent days again brought more irresponsible statements by some of our worthy elected officials. How would one react when your federal minister for railways, Mr. Bilour sets a bounty of $100,000 on the head of the film maker when this money could have been used for the flood relief, a major natural disaster that has been seriously neglected by the media this time; or on the damaged property of an already poverty stricken. What worse could come out from the statement when your Interior Minister starts blaming the “rogue elements” that tried to topple the government, instead of accepting responsibility of complete security failure on that dreadful day? The most common excuse you could hear is a “foreign hand involvement” when clearly the very mobsters that thrashed our streets were our very own people, the by-products of the experiments from late 70s and 80s that radicalized, and even militarized the common mindset with ideologues of puritanical orthodoxy, intolerance and bigotry.

In order to understand what sets our mob vandalism, it is imperative for the State to address the very roots that started breeding hatred through its designed general narratives against the West, India and even, the non-Muslims living in Pakistan. Though the nationalization of public schools brought more failure in education sector back in the 70’s, parents lost their confidence in schools, and started sending their children to informal schools and Madrassahs, with more hard-lined syllabus. This is the issue that has been addressed many times before, but no serious attempts have ever been made in education reforms with an aim of replacing the hate material found in our textbooks. The radicalization in the society has been perpetuated through the State as it remained in constant appeasing position to the clergy in the interest of gaining their political advantages. This resulted in more and more radical legislations successively, starting from the very inception of Objectives Resolution right after the Quaid’s death to the solemnization of the draconian laws, which have been used as strong tools to keep the masses in control of the powerful players in the society, i.e. the feudal lords, the army and the clergy: included recently in the league is the judiciary and the media, that keeps its personal, political or commercial interests above the interest of public. This is not some “foreign hand” or “rogue element” conspiracy that has retrograded the mindset here. This is the very internal failure of the policies that were devised without keeping in view the long-term repercussions on the nation, that is now beginning to implode from within and thus easily allowing for external exploitation, like the direct international financial imperialism that our only powerful institution, the Army, can’t afford to let go.

Through all the mish-mash of defining what has been considered strategic interest, the very parallelism that has been drawn against the consent of citizens, despite being a democratic government, is becoming quite obvious how citizens are kept deprived of knowledge of things in their objectivity by designing rightist, naive narratives over Islamic jurisprudence on what should be the length of shalwar during prayers in TV shows, or if it is alright for couples to get caught in the national parks, just so the citizen perspective cannot be developed to make informed decisions in serious matters of the state. Or in other serious issues that in the age of high speed informatics cannot remain hidden, a complete picture is never provided because some information is deliberately curtailed to mislead or charge public sentiments in compliance to strategic policies. This has lead us to a weak nationhood, where everything has divided people here, left rogue and being lead to their rapid decay. How can an external hand be more damaging than the very designed, and now splinter narratives we draw our wisdom from? Is it still a distant memory how murders were conducted following a fatwa that was irresponsibly issued by a popular TV host here?

Despite all the adversity, one must not remain oblivious of continuing struggle of the progressives of Pakistan, and that too hardly come out in the media. A recent example is the cleaning campaign undertaken by the concerned citizens of Pakistan who took it to themselves to clear the mess left by the rioters the next day. Again, the State seems missing from the scene of a massive repair of the damage that was done in the name of religion last Friday. Despite the fact that recently President Zardari has condemned torching of the Church in Mardan and has instructed the authorities to take appropriate measures in this regard, there seems to be a gap in advising a mechanism with which to ensure that this particular place of worship is re-constructed and is ensured that its construction work is completed without any mishap. Moreover, there is a dire need to put more public pressure on the State to ensure safety and protection of all citizens and their religion. This is the time for a democracy to transform in its true essence of citizen ownership and control over things through their voting power and their political lobbying efforts to translate the needs of the complex, pluralistic society that deserves its respect, dignity, harmony and peace without being ruled or dictated by our power players who seem to be working against public interests. It is time that people wake up, and start exerting their presence in the State. What happened on Friday was a day of shame and our own exposure of weakness. It was the day that did not elevate the respect and dignity of Prophet Muhammad (P.B.U.H) that He deserved as a Messenger of peace, but instead, it was a day that brought more shame to what He preached us about love. Those people on the streets do not deserve to be called Ashiq e Rasool, as they defamed Him and further shamed the Muslims all over the world.