“I have always held the religion of Muhammad in high estimation because of its wonderful vitality. It is the only religion which appears to me to possess that assimilating capacity to the changing phase of existence which can make itself appeal to every age. I have studied him—the wonderful man and in my opinion far from being an anti-Christ, he must be called the Savior of Humanity” (Sir George Bernard Shaw in ‘The Genuine Islam’ Vol.1, No.8, 1936)

As words in my title hint, one of the news that is dominating the international media right now concerns a movie trailer that is said to be degrading to Prophet Muhammad (PBUH). According to a NYT report, even though the original trailer was posted on YouTube in June, no particular attention was paid to it until it was translated into Arabic and then posted again on YouTube just days before September 11. As protests sparked through a lot of Muslim majority countries which were said to be in reaction to this offensive film, they got especially deadly in Libya as they resulted in very, very unfortunate death of Ambassador Chris Stevens along with three other Americans. 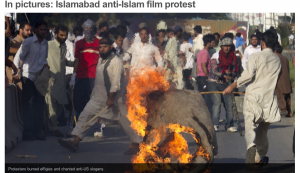 As far as the film is concerned, calling it a film would be blasphemous to the film industry. First of all, it’s not even a fully fledged Hollywood film but is said to be just a trailer which is uploaded on YouTube and all that people have seen of this movie till now. Secondly, a lot of actors have come out and said that they had no idea that the film was going to be about degrading Islam or its Prophet. In fact, On the Media reports that dialogues in the film were over-dubbed. If you look closely, you can see that people are saying something different than what is being voiced over their images.

Now various questions have arisen out of this whole debacle about the limits of freedom of speech (if there are any), the violence that resulted and who is responsible and its implications for interfaith relations.

First of all, as far as Western Muslims are concerned, there is always an understanding that they have to share the blame of every incident of violence done by a Muslim or number of Muslims around the world, no matter how far it is from their homes and whether they actually had any control in preventing it from happening in the first place. I think that only people who are responsible for such actions are those who are committing them. However, I also feel that being Muslims it is our duty to stand up for justice whether it is for Muslims or non-Muslims in any part of the world. If there are instances when some Muslims around the world are engaging in violent acts that have hurt innocent people (like in this case, the death of four Americans and several other protestors), Western Muslims should condemn them in strongest terms not because they have to prove their ‘moderation’ to anyone, but  because Quran specifically instructs them to do so:

“O ye who believe! be strict in observing justice, and be witnesses for God, even though it be against yourselves or against parents and kindred. Whether he be rich or poor, God is more regardful of them both than you are. Therefore follow not low desires so that you may be able to act equitably. And if you conceal the truth or evade it, then remember that God is well aware of what you do” (Holy Quran, 4:136).

Secondly, Muslims need to be careful about misdirecting their anger at a whole community of religion due to the action of an individual even if he himself claims to belong to a certain religion. Whether he is a Jew or a Coptic-Christian shouldn’t make us think that his actions are representative of an entire faith, just like Muslims wouldn’t want 1.6 billion people around the world being thought of a particular way due to the actions of some misguided people, no matter how much they claim to be Muslims.

Now come to the reaction of the people in Muslim countries. Incidents such as the release of this movie trailer are used by Islamists to incite people’s emotions and play on their frustrations which are present due to hunger, poverty and illiteracy and other grievances so that they can get political support. These people only use the slogan of Islam to further their own agenda to get political power. You can see that such people never have any solution to real problems affecting the country. They never talk about how they will end corruption in the government, how they are planning to get their youth into schools, do they have any disaster management plans to make the country safer against floods, earthquakes, industrial fires etc., what would they do to provide jobs, housing and other basic day-to-day necessities for the people should they come in power. They only use the slogan of Islam because they know it is popular with people.

Let’s focus on Pakistan as an example. In Karachi on 11 September 2012, there was an incident of worst ever industrial fires in country’s history that claimed the lives of some 289 workers, as well as in Lahore on the same day which resulted in the death of some 25 people. That’s more than 300 deaths in a single day. Under normal circumstances, this should be the reason for people to get out on the streets, demand safe working conditions for workers and justice for families who have been affected. But Islamists completely seemed to ignore this real issue which affected the lives of so many citizens of their own country and chose to organize protests on Friday to condemn the film that was made by a no-body and now probably has gained more publicity as a result of the reaction that they have shown. It is because they only have the rhetoric to get people on their side, not practical solutions to the real problems that people face.

As far as violent protests are concerned, there is no justification for them as Quran says time and time again: “And create not disorder in the earth after it has been set in order….” – (Holy Qur’an, 7:57, 11:86, 29:37). Even if you want to show your outrage, show it using the same freedom of speech that has been abused by the makers of the film. Write in newspapers, go on media to condemn it, you can also make a documentary countering its claims or even if you want to protests to an embassy, file in your complaints or concerns in a civilized manner to the ambassadors of that country so that they can look into the matter or take it up to higher officials, DON’T KILL THEM! After such actions, the claim that Islam is a religion of peace won’t be able to persuade people because like it or not, Islam is judged not by its original content, but by the behavior of its followers around the world.

Lastly, those in the Muslim majority states who are demanding that this film be banned have to understand that with all the new technological advances, it is very hard to censor or stop the flow of information in today’s world as there are a lot of way to get around censorship. Even if Muslims are successful in getting the film banned in Muslim majority countries, people around the world will still be able to access it and now probably they would want to watch it more than ever given the controversy that it has generated and these are the people who need to be told what Islam and Prophet Muhammad (PBUH) actually stood for. In today’s globalized world when people from different backgrounds are coming into contact, very few of them have complete knowledge of each other’s beliefs. Therefore, instead of banning the discourse, Muslims should take up this opportunity to enlighten people about Islam because let’s face it, it is always in the news and if people with proper knowledge are not going to explain it to their fellow citizens (no matter which country of the world they are in), people like this film maker will take up that space and make people believe as if they have all the appropriate knowledge about Islam that one needs to know. In a Muslim majority state where people are already well-aware of the character of the Prophet, even if this film is not banned, it is not going to make people hate Islam or the Prophet because they have the required knowledge to see the misinformation being portrayed. The real need is to explain the reality of Islam and the character of the Prophet Muhammad to a non-Muslim audience so they don’t pay even a little bit of attention to Islamophobic people. However, those who still want to justify violence in the name of Islam and protecting the honor of the Prophet, I wonder: “Do they not ponder over the Quran, or is it that their hearts are locked up from within?”  (Holy Qur’an, 47:25).