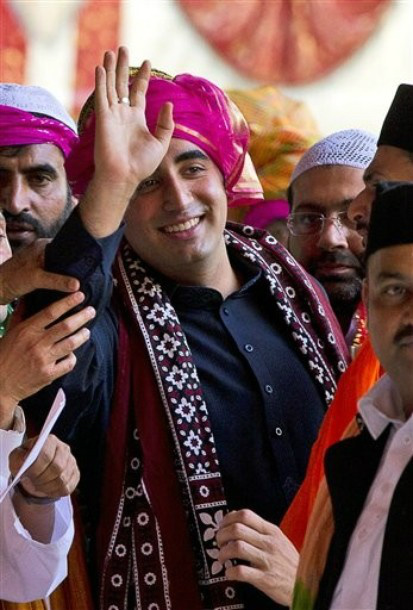 “Democracy is the best revenge”: his mother’s words from the juvenile, captivating Bilawal Bhutto Zardari ricocheted as the catchphrase of the century – at 19, he had already treaded into the birthright gripped in cavernous scarlet; the parable of which elongates to every bend of the earth. With strenuous viciousness, they executed his grandfather, uncles and his mother, the “alluring” Daughter of the East; and yet, “Bhutto survives”… in his grandson, who is destined to escort the future Pakistan to the climax of prosperity.

He is the Bhutto’s blood – his flesh. Substantial similitude to the Quaid e Awam makes Bilawal Bhutto Zardari incomparable; for devoid of misgiving, he is “the one without a paradigm” as his name implies. He is the “Zulfikar Ali Bhutto”of Pakistan!

Newspaper captions read “The Child who fooled the President” – Born to Mohtarmah Benazir Bhutto and President Asif Ali Zardari on September 21, 1988, Bilawal was the most “celebrated” newborn in Pakistan’s narration ; yet, his continuation – a hostage to his family’s assertion to an improved prospect for Pakistan’s inhabitants, who look upon the Bhuttos as an icon of veneration.

December 30, 2007 – there originated a new epoch, crammed with woe; yet exemplified by resolute dedication to the homeland. The jingles of “Jeay Bhutto” send frissons to the enemies of democracy. A new anecdote of red, green and black began with Bilawal Bhutto Zardari, taking the mantle of leadership and assuming the headship of the largest political party of Pakistan:“It (the PPP) was not handed to me like a piece of furniture. The party asked me to do it and I did”.

Perhaps, in his leadership, the party stands more unified and stronger than ever – a new life surfaces with every bloodshed, for the martyrs’ blood is bound not to go vainly.

The Bhuttos have long been acknowledged for their magnetism and fearlessness. Bilawal Bhutto Zardari prolongs the heritage. Bold and brilliant, he reveals all the constituents of the future Prime Minister of Pakistan.

He is the distinct Pakistani leader, who can plainly clasp the ashen scrap in Pakistan’s flag and has undertaken to defend the religious minorities who reside in this country. Unreservedly against the frame of mind that killed the former Punjab Governor, and the Minorities Minister, he declines to believe that Islam authorizes sadism. Perhaps I am very certain that he will eliminate the tarnish of being the world’s most treacherous place for the minorities and journalists from Pakistan’s name.

He has persistently said: “May Baaghi Hoo” – undeniably, he is a dissenter to the double standards ripping us apart: frequent military governments, ostrich politicians, butchering of the minorities, inept law and order system, the radical attitude which have encumbered the country’s growth ever since its establishment.

Bilawal Bhutto Zardari craves for the Jinnah’s Pakistan – forbearing, progressive and egalitarian. He endeavors for Pakistan free from the ills of scarcity, illiteracy, fanaticism and ailments. He yearns to make a difference, for in Bilawal’s words “Jo faisla hota nahi, wo faisla kar daiy gay hum…”

He is Benazir Bhutto’s son. The ordeal is detectable in his eyes and tone, every time he says: “Ya Allah Ya Rasool, Benazir Beyqasoor”… He is a son, who till the date has been shorn of justice for his mother, and grandfather, both of whom lost their lives to make certain that the ejected ones too do get “Bread, Clothing and Shelter” at the minimum.

On September 21, 2012, Bilawal Bhutto Zardari observes his 24th birthday, and the ocean of my sentiments of undying adoration and devotion to him reaches the zenith, so I reach out to say Happy Birthday to Bakhtawar’s brother –the child, who sacrificed his adolescence to win a peoples’ love.

“I give you the gift of my feelings. You will fight the fight better than me. Your speeches will be more eloquent than my speeches. Your commitment equally total. There will be more youth and vitality in your struggle. Your deeds will be more daring. I transmit to you the blessing to the most blessed mission. This is the only present I can give you on your birthdays.”