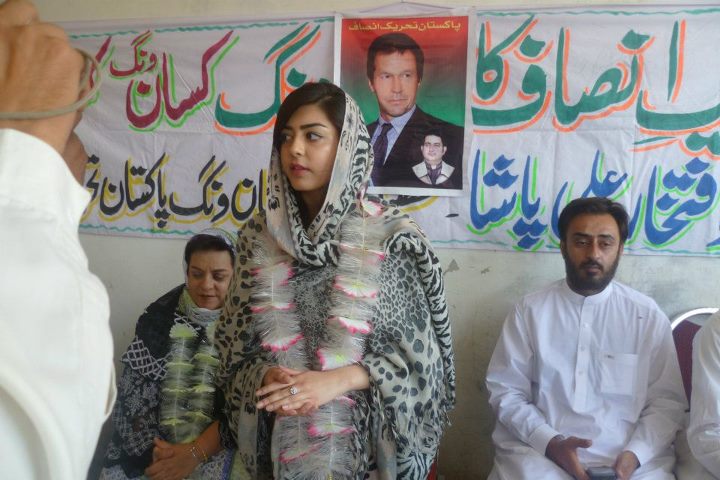 I can no longer remain in a party where my ideology conflicts with theirs.

I can tolerate criticism regarding my work, my attitude towards ex-fellow party members and a lot of other things but one thing I have put up with for the last 6 months (since April when I joined PTI in Rajanpur District) is abuse and character assassination. This is something I am simply not ready to tolerate anymore, be it for PTI or anything/anyone else; my respect and principles are more important to me than a party that continues to attack me despite my contributions to it ever since I joined. Admitted, I have made mistakes in the past, but being called a “prostitute,” or hearing/reading insults regarding my late grandfather by PTI workers is simply unacceptable. Yes, I wear what I want and I live my personal life exactly the way I want to – that is between me and myself; no one else ever had or will ever have a right to comment on it. I will never make any apologies for the way I choose to live my personal life. I tolerated my personal life being put up for criticism and abuse by PTI workers and ignored it because I believed in PTI’s vision and did not want to put any impediments in the way to their success.

When PTI started taking in feudals and lotas, I stood by them because Khan convinced us that he knew what he was doing. Despite his dictatorial decisions in the PSC in granting Musharraf’s ex-ministers the most significant positions in the party, I stood by my ex-leader. I trusted his judgment. I trusted that these people were coming into our party because they had changed and wanted a Pakistan that was a democratic, progressive welfare state. I was only to realize slowly and gradually how impaired my judgment had been. I even went so far as to stick by my party when party workers hurled stones at me and literally molested me at the Pindi Jalsa because I thought “if its for Pakistan, I can stick it out.” I just recently realized, well no, its not really for Pakistan is it? Is this a Pakistan any sane person would want to say? Admitted, PTI is the only option right now as the others have PROVEN to be corrupt and inefficient, but why should I continue to defend a party where a) not only am I abused but b) the senior party leadership has only its power-hungry interests at heart.

When I was angry, I wrote a 2 page article on specific people that were discrediting PTI and details of how they were influencing Khan to move away from the ideology we have had for 16 years. This was till I realized, I’m better than that. Just because PTI had treated me like dirt doesn’t mean I’m going to reciprocate such disgusting treatment. PTI Rajanpur and I will continue to work on an individual level on social work projects which are my main aim for the next few years. The people of Rajanpur are just as much my responsibility as I am theirs. I will continue to speak for those oppressed as I have always done – no Leghari or feudal sardar is going to be able to defeat that part of me. I truly pray that Khan wakes up and realizes that his party has been hijacked, as my mother stated, which only resulted in sick PTI workers abusing her as well, conveniently forgetting about how hard she has worked for Pakistan all her life, even without party affiliations. Khan may think he knows what he’s doing, but when he passes comments (regarding the Rajanpur jalsa which he did not attend), saying “convince them to come back later/why cant they just come back tomorrow,” I feel he has lost touch with the poverty-stricken and neglected population of not only Southern Punjab, but Pakistan, as a whole. These were poor people, most of them affected directly by the floods, who had borrowed money to try to make ends meet just to be able to hear Khan speak to them for 20 minutes. A delay in DGK, sitting and convincing more sardars to lend their support just doesn’t cut it as a justification for keeping these people waiting. If it had been just the wait, one could even forgive that – but the fact that he didn’t even bother apologizing to those people was what made me sick to my stomach. What pushed it one step forward was Awais Leghari’s attack against my mother, calling her “unreasonable” for standing up for people who are oppressed by the system his feudal mindset propagates.

I for one am tired of slogans of change without any concrete policy. I sincerely pray internal party elections result in the removal of damaging elements from within PTI. I could write on and on about how senior leadership in the party has disrespected one another, including Khan’s disrespect towards my mother, but that’s another issue which I do not wish to delve into – ENOUGH of dirty politics.

Pakistan is and always will be my home; my soil to which I will always give back in whichever way I can – but I can no longer remain in a party where my ideology conflicts with theirs. If it is really a change Khan wants to bring about, why is the old guard of PTI shunned and humiliated so that he can use Tareen’s private jet? How Imran Khan thinks this isn’t elitism shocks me!

InshaAllah when I have my degree in hand and have served Pakistan to the extent where I feel I am in a position to re-enter politics, I have no other ambition but to do so. Until that day, health, education, women’s rights and other projects that I had been working on in Pakistan will not come to an end. Infact, with no party affiliation, I am in a more credible position to carry out my work. To all those who abused me and my family, I pray for you and hope you develop into decent human beings because that is something that PTI clearly hasn’t taught you. Criticizing Imran Khan does not make me a “traitor.” I am free to criticize on issues where I feel the nation is being misled; blind faith in a leader (any leader at all) is not the way I work – sorry to disappoint.

I appreciate the work that the Imran Khan Foundation and Shaukat Khanum are engaging in – but that’s what Imran Khan is superb at; social work. He is an asset for Pakistan in terms of his dedication in the field of social work. As a politician, I feel like he needs to remember who he was 15 years ago and what vision he had because it no longer exists in the party. What are considered “electables” aren’t what Pakistan needs – what we need is an honest and focused leader who will stick to his initial convictions and beliefs even when offered the short cut.