Home  »  Featured • Original Articles   »   Imagine if that had happened in Syria, or with a visiting US diplomat to Iran, Pentagon-based revenge already would be in effect 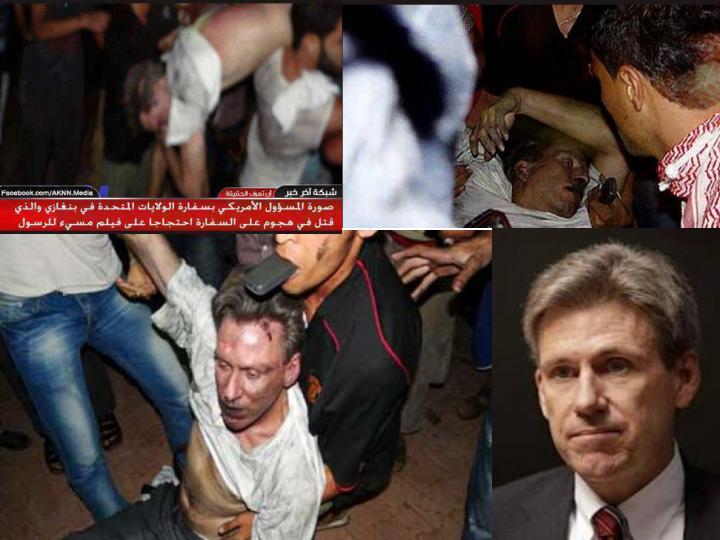 MENA (Middle East/North Africa) is on fire. The diffuse rage – even if manifested by a tiny minority, Saudi-funded Salafists in particular – is distinctly anti-American. Protests in Cairo have reached Yemen, Tunisia, Sudan, and even Bangladesh and Indonesia. The administration of US President Barack Obama is perplexed beyond belief. There will be revenge. What’s really going on?

It does not matter whether that infamous, crude, made-in-California anti-Islam and anti-Prophet Muhammad flick – actually financed/produced by an Egyptian Christian Copt and American protestants, instead of a non-existent Jewish real-estate developer – was just a pretext that led to the killing of the US ambassador in Benghazi and the protests in Cairo and beyond. Let’s try to identify the consequences.

The militia ballet
The strategic target of the Salafi-jihadis who killed the US ambassador in Benghazi was to torpedo the (already shaky) Obama-Muslim Brotherhood alliance.

Imagine if that had happened in Syria – or with a visiting US diplomat to Iran, for example; Pentagon-based revenge already would be in effect. US consulates were never attacked when Colonel Muammar Gaddafi was in power in Libya; it happened under the watch of a “NATO rebel” regime fully sponsored by Washington and Saudi Arabia.

Libya is now militia hell – from neighborhood-watch outfits to mini-armies. They won’t disarm. They refuse to be part of government security forces because their logic is tribal. They’re fighting one another. No weak central government in car-bomb-infested Tripoli will rein them in. In fact there are already signs that elements in the Libyan government and security forces are loyal or sympathetic to the most powerful faction of mini-armies, the Saudi-funded Salafists.

Another way to put it is that “liberated” Libya is now warlord country, which remains under the shadow of Takfiri Salafist militancy, which as per Saudi ideology is not only anti-West, it is also opposed to mainstream Sunni Muslims, Sufi Muslims and Shiite Muslims.

The Salafi-jihadis – with whom Washington, London and Paris were unashamedly in bed during their humanitarian bombing campaign (humanitarian and “excellent” if one is to believe Quilliam and other naive or Saudi funded lobbyists and analysts) – are based in Cyrenaica, eastern Libya. Some have come from Iraq. Some are shuttling back and forth to and from Syria, aiming to destroy yet one more secular Arab republic.

They include the heavily armed gang that attacked the US consulate – the self-described Imprisoned Omar Abdul Rahman Brigades, which surfaced only four months ago. Three months ago, hundreds of AK-47-equipped Salafi-jihadis held Benghazi hostage demanding sharia law.

The (disintegrated) police and army of “liberated” Libya could not possibly face them down. Local tribes don’t care. Salafi-jihadis have been attacking Sufi mosques and tombs; Sufi Islam is infinitely more moderate – and intellectually sophisticated – compared with medieval Wahhabism.

The training camps are near Derna – which has a history of being a top source of al-Qaeda-style jihadis, especially active in occupied Iraq. This does not mean all the Salafi-jihadis are affiliated with al-Qaeda in the Islamic Maghreb (AQIM); it’s a local Libyan affair, however, its external links not only with AQIM but also with Saudi Arabia cannot be ignored.

Anyway, by now Derna must be under watch, millimeter by millimeter, by Obama’s drones. Hellfire missiles will be raining down over Derna in no time. There will be collateral damage. No one will shed a tear.

As much as Salafi-jihadis are a minority in Libya and elsewhere in Muslim countries, they are a highly motivated, trained and weaponized minority. They have the motivation of Al Qaeda and funding of their generous sponsors in Saudi Arabia and other mini-state in Persian Gulf. They won’t go down quietly. They will react if the Obama administration goes for all-out droning and a Hellfire feast; they will attack the weak central government in Tripoli. Somalization looms.

USA’s honeymooon with Muslim Brotherhood
Egypt is a much tougher, nuanced proposition – because it’s the model for the uneasy Washington-Muslim Brotherhood (MB) love affair, with the US betting on moderate Islamists as provisional substitutes of friendly dictators of the Hosni Mubarak kind. A complicating factor is that Egyptian President Mohammed Morsi is in direct competition with local Salafis – who got 25% in the congressional elections. So the MB won’t be very forceful in denouncing them – even though they are hated by the Salafis. However, don’t ignore the fact that MB too has cosy relationship with Saudi Arabia. In their ideology and tactics MB too are Salafists, a tad more refined and camouflaged than the more Xenophobic Nour party.

There’s virtually nothing the Obama administration can do to pressure Morsi. He has been extremely cunning – playing the US, the House of Saud and Qatar against one another. Whatever happens, the brief honeymoon between the Obama administration and the MB is destined to sour. The only regional actor to savor this will be Israel – which detested the honeymoon in the first place.

The Obama administration was forced into this dead-end because – foolishly, one might stress – it has been playing the sectarian card, aligning itself with the medieval House of Saud and cunning mini-superpower Qatar, key protector of the MB, but also with all sorts of Salafi-jihadism, especially in Syria. All this to ultimately defeat the self-described “axis of resistance” – Iran-Syria-Hezbollah – whatever it takes. It takes facing repeated instances of blowback all across MENA and beyond.

In the meanwhile, Western media, analysts and think tanks continue to present a partial picture of affairs. UK based Quilliam Foundation is a case in point which thinks the attack on Benghazi is an isolated incident which has nothing to do with the joint patronage of Salafist militants by the U.S. and Saudi Arabia. Another example is a recent article in Wall Street Journal by former Pakistan ambassador to the U.S., Husain Haqqnai, which almost completely wipes out the fact that the US remains a key ally of Saudi-funded Salafists (Islamists). Haqqani’s article does not explain that USA remain a key guarantor of murderous Salafist regimes in KSA, Bahrain and other Gulf countries. Blaming Islamists (Takfiri Salafists to be specific) while ignoring their Saudi-US sponsors serves neither West nor Muslims.

So what is Obama to do? The cosmically mediocre Mitt Romney accused him of being weak in the face of “terra-rists”, but Romney is a foreign-policy pigmy, whose neocon-instilled agenda boils down to treating both Russia and China as enemies and bombing Iran. The Republican Party simply has no clue of what’s going on in MENA.

Not that Obama has much to rely on. The old, cozy, dictator-led order has collapsed after Tunisia and Egypt. Washington is being kicked out of Iraq. Obama himself cannot position Egypt as an ally or a threat. What’s left is to drone – somebody, anybody – to death. Send the marines. Deploy some warships. Display some military muscle. And hope for the best.

What the U.S. needs now is to develop a sound, coherent MENA policy. More importantly, the U.S. in particular and the West in general have to realize that they cannot hope to eradicate terrorism while continue to have their honeymoon with Saudi Arabia, keep looking the other way while Saudi based Sheikhs fund Salafist militants in Libya, Turkey, Syria, Pakistan, even in Western countries. Incidents of 9/11 and Libya 9/11 show that Saudi-funded Salafist militants are single major threat not only to the West but also to the Muslim world. There will be no peace in the world unless West stops sponsoring and protecting the evil Salafist regime and helps Saudi people in installing a democratic government in Riyadh. Till then, we will continue to see more 9/11s – in New York, Washington DC, Benghazi, London, Madrid etc.