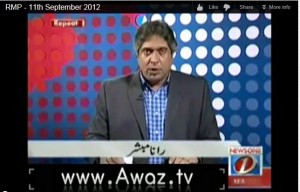 During his 20 minute stint (from 16:18 to 36:32) on the Rana Mubasher show (September 11, 2012) , Senator Faisal Raza Abidi (Pakistan Peoples Party) made some crucial observations regarding the current judiciary’s predisposition towards Takfiri terrorists. While Pakistan’s Taliban apologist media chose to ignore it, Senator Abidi highlighted the important developments of how the Supreme Court is bent upon freeing mass murdering terrorists like Malik Ishaq – leader of Pakistan’s primary Al Qaeda affiliate, the Lashkar-e-Jhangvi.
http://www.youtube.com/watch?v=xjYKm3WfDBA&feature=player_embedded

The Supreme Court has a history of supporting the Islamofascist militant brigades of Lal Masjid. It has once again released the chief cleric of Lal Masjid inspite of the latter’s incitement to violence against the very State and Constitution of Pakistan.

Pakistan’s civil society has been damningly silent in being critical of this PCO Judiciary. This is because they were instrumental in aligning themselves in a discredited movement to restore disgraced and compromised bureaucrats like Iftikhar Chaudhry and his crony judges. While Pakistan’s civil society is always ready to heap abuse and slander on the martyred leaders of the Pakistan People’s Party, they conveniently paper over their own substantial role in spreading religious extremism in Pakistan.

During his brief time on the show, Senator Faisal Raza Abidi reiterated the corruption, bias and prejudice of Pakistan’s anti-democracy and pro-Taliban judiciary. He was even critical of his own party for their lack of courage in resisting judicial tyranny. As Pakistan’s PCO Judiciary gears up to dismiss another elected Prime Minister on an Un-Constitutional basis while going out of its way to thwart the efforts of the Law Enforcement authorities in nabbing Islamist terrorists, one should pay heed to Senator Abidi’s bold critique. We disagree with his unnecessary and insensitive remarks against Ahmadi muslims during one such segment. However, his exposure of this pro-Taliban judiciary and its various biases is the need of the hour.