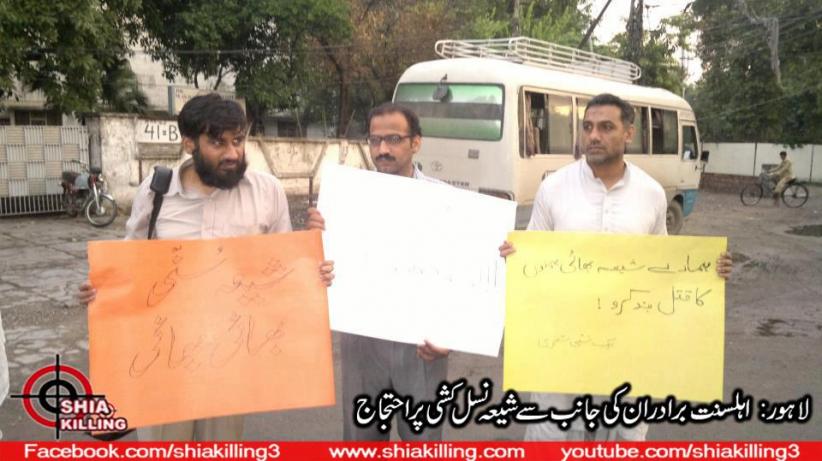 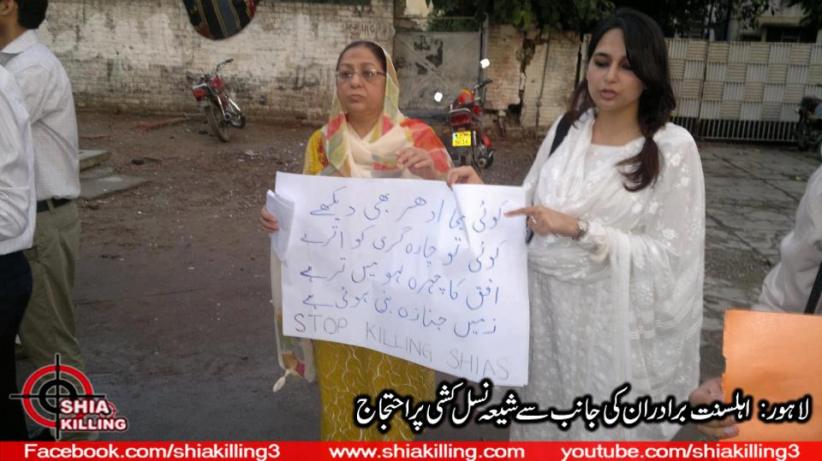 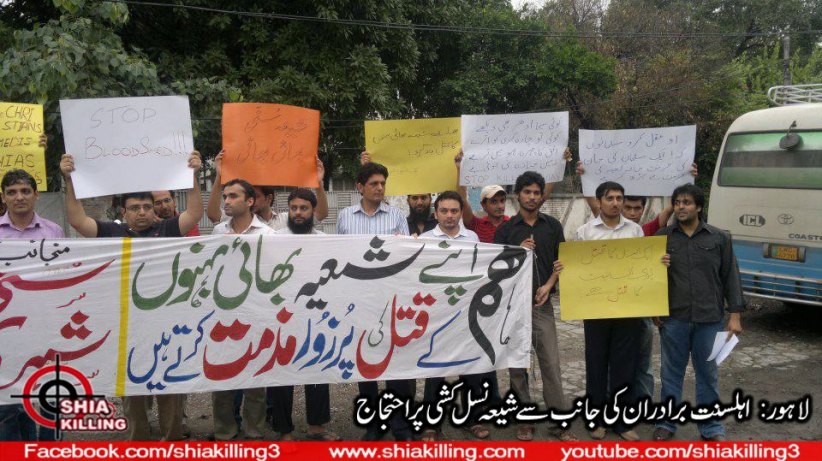 Those who are reluctant to use the ‘Shia genocide’ discourse should learn from the clarity of vision of the Sunni brothers of Lahore shown in the above pictures. We commend this move to have joint protests by all members of civil society to be united against violent religious extremism. This is not limited to violence against Shia Muslims. Other communities like Christians, Hindus and Ahmedi Muslims have also been targeted by the the same radicalized Wahhabist or Debandi/Ahle Hadeeth terrorists in Pakistan and indeed all over the world. The hate mongers are the enemy within. All citizens of Pakistan and indeed the world must unite to counter this menace.

A big number of Sunni Muslims protested outside the Lahore Press Club against the Shiites target killing in the country at the hands of Takfiri Deobandi terrorists. Protesters were carrying placards with slogans such as Stop Shiite Target Killing, Shia- Sunni are Brothers, Unity is the way to defeat the enemy etc. The protest went on for several hours.

Speeches were made at the protest which outlined the fact that Shiites had played an exceptional part in the making of Pakistan and had perhaps made more sacrifices than Sunnis during the 1947 Partition. However a recent plan has been put into action where Shiites are being pin-pointed and killed in an attempt to create Sectarian Violence in the country. The government’s criminal silence makes it seem as though everything is being done according to the government.

The protest leaders said that they belong to no political party but are just Patriotic Sunnis who feel for the Shiites. They said they are grieved over the recent killings of their Shiite brothers. They said they are standing beside their Shiite brothers in these dark days. They said, referring to the government, that the Shiite Genocide should be stopped immediately and Shiites should be provided adequate security in every city.

The protesters said the Chief Justice of Pakistan should take Suo Moto on this issue. They expressed grief over the fact that if a girl is molested in a remote village on the outskirts of Punjab, the chief justice can’t sleep peacefully without taking any action against the mass target killing of Shiites. They said the Chief Justice should not be biased.

Karriaper said HRCP had reported that as many as 313 Shias have been killed this year alone. He said the government was not doing enough to bring sectarian violence to an end. “None of this would have happened without the active connivance of the government and law enforcing agencies,” Karriaper said.

“This protest was called by a group of Sunnis so that people and media do not dismiss our voice as coming from marginalised sections of the society,” Karriaper said. One of the banners at the protest read, “We condemn the killing of our Shia brethren – Sunni Citizens.” He said the protesters were independent people expressing their solidarity with Shias.

“People in the Punjab have not been sensitised about the issue of how people are being persecuted in this country,” said another protester, Hasan Rehman. Rehman, who has previously protested with the Labour Party Pakistan and lawyers movement, said, “Protesting is not about self glorification. People are dying and we are all turning a blind eye”.