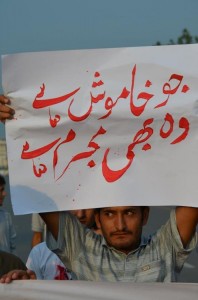 16th August marked yet another black day in our history when at least 22 Shias were murdered near Babusar pass. The pattern of killing was the same as that witnessed in earlier incidents wherein buses are stopped by armed terrorists, Shias identified through ID cards and mercilessly killed in cold blood. Over 300 shais have been killed so far during the last eight months. In a civilised society, all hell should have broken loose in the media and people irrespective of faith or sect should be out in the streets protesting this barbarism. But unfortunately this is Pakistan where the majority of population either considers Shias as non-Muslims or are afraid of raising their voice against these extremists. It is so unfortunate to witness the silence of this Muslim society which, according to Quran (3:104,110), is known for enjoining what is right and forbidding what is wrong.

There is a widespread misconception that these cold-blooded killings are part of a sectarian conflict. Had it been a sectarian conflict, as it was in the 80s, we would have seen Shias killing the other party as well. This all seems to be one-sided ethnic cleansing by the proponents of extremist ideology whose leaders openly make Shia hate speeches in their rallies and even call for Shia murders. They are the same terrorists who are involved in terrorist activities against the people and government of Pakistan. Calling it a sectarian conflict is putting a damper on the one sided and unprovoked heinous crimes being committed by these monsters.

A few factors contributing to this:

Lack of will and collusion of government: Some influential figures within Punjab government work hand in hand with banned terrorist groups like SSP (now ASWJ). Law minister Rana Sanaullah graces rallies of these law breakers while Punjab CM aka Khadim-e-Aala is on record pleading with the Taliban to spare Punjab, as if the rest are children of a lesser god. Our President Asif Ali Zaradri deliberately ignores the Shia identity of the victims in his statements and honourable Chief Justice whose suo motos range from ‘Waheeda Shah ka thappar’ to Atiqa Odho’s bottles of liquor is also a silent observer.

Silence of religious parties and scholars: Another shameful aspect of this barbarism is that it is being done in the name of Islam which is a religion of peace and tolerance. Unfortunately, our religious parties, whose duty is spread the true message of Islam, are mostly silent on this issue. Over the last few decades, mainly because of this so-called Jihadi culture, we have become gradually indifferent to the sanctity of human life especially for those who don’t share our religious ideology. This attitude is totally opposite to teachings of Quran(5:8) which asks Muslims to be the bearers of just witness to an extent that our hatred for other group should not turn us away from justice.

Ignorance of the mainstream media: And then we have the so-called independent media that can provide us non-stop coverage of Shoaib Malik’s wedding ceremony or we can see every possible aspect of Arslan Iftikhar alleged corruption case being covered but they opt to ignore these issues of extreme importance. May be it doesn’t sell. The supposedly big ghairatmand names are mum on this matter. They do programs on Burma, they see foreign hand in every incident but when it comes to exposing major internal issues, they are nowhere to be seen.

Confusion of masses: These killers are doing this at will because they know people don’t care and no one will stand up against them. This is the most painful episode of this issue because politicians, scholars, media people are all part of the same society. It doesn’t come as a surprise that all of the above combine to make a recipe of a confused nation. At times it makes you think how numb we have become to all these atrocities being committed around us: the mobs lynching youngsters to death, women being paraded naked, kids charged for blasphemy and people killed because of their beliefs.

This zulm can’t continue if these extremists know that people will not tolerate them. There were four brave Sunni passengers who sacrificed their lives but refused to identify Shias for the terrorists. If we all could instil such spirit of resistance we can eradicate this zulm from our country Inshallah. We need to spread the awareness in our close circles and ask people to do everything they can to stop it.

Let us make a promise today that we will raise our voices against this oppression. God help us all.