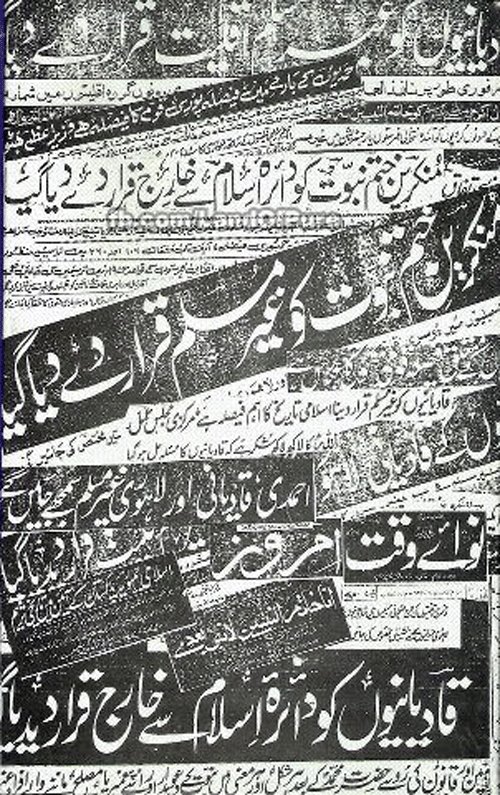 On 7 September 1974, Pakistan formally became the Takfiri Republic of Pakistan (TRP). On that date, Pakistan’s elected parliament Zulfikar Ali Bhutto, in an act of cowardice under pressure of sectarian Mullahs, led by unscrupulous politicians of almost all political parties in the parliament, played God in declaring Ahmadis as non-Muslims.

The law came into force after the formal assent of the President ten days later, on 17 September 1974.

An Act to amend the Constitution of the Islamic Republic of Pakistan [Gazette of Pakistan, Extraordinary, Part I, 21st September, 1974]

The following Act of Parliament received the assent of the President on 17th September,1974, and is hereby published for general information:-
Whereas it is expedient further to amend the Constitution of the Islamic Republic of Pakistan for the purposes hereinafter appearing ;

It is hereby enacted as follows:-

(1) This Act may be called the CONSTITUTION (SECOND AMENDMENT) ACT, 1974

(2) It shall come into force at once.
2- Amendment of Article 106 of the Constitution.

In the Constitution of Islamic Republic of Pakistan, hereinafter referred to as the Constitution in Article 106, in clause (3) after the words “communities” the words and brackets “and persons of Quadiani group or the Lahori group (who call themselves ‘Ahmadis’)” shall be inserted.

(3) A person who does not believe in the absolute and unqualified finality of The Prophethood of MUHAMMAD (Peace be upon him), the last of the Prophets or claims to be a Prophet, in any sense of the word or of any description whatsoever, after MUHAMMAD (Peace be upon him), or recognizes such a claimant as a Prophet or religious reformer, is not a Muslim for the purposes of the Constitution or law.” (Source)

On 7 September 1974, Pakistan became the first ever Muslim majority country in the world where an elected parliament declared a minority Muslim sect (Ahmadiyya Muslims) as infidels (or Kafir).

This was the second amendment to the 1973 Constitution of Pakistan for which Zulfikar Ali Bhutto proudly took credit for this most shameful act in Pakistan’s democratic history. Declaring Ahmadis to be non Muslim is one of the biggest sins of PPP which resulted in Persecution of Ahmadis in Pakistan and latter transpired in a greater calamity for another Muslim minority community, i.e., Shias who currently face a slow-motion genocide in Pakistan at the hands of Takfiri Deobandi extremists, with at least 19,000 dead and a similar number injured or permanently maimed.

Later in 1984, military dictator General Zia-ul-Haq issued a barbarian ordinance which barred Ahmadis from free practice of their faith, restricting them from using Islamic terms; a mere act of saying Assalam-o-Alaikum by an Ahmadi was declared a criminal offence.

However, the roots of anti-Ahmadi prejudice run deep in the Subcontinent’s Muslims, including Sunni and Shia, although barring two or three token Shia clerics who joined the almost entirely Sunni-led and Sunni-participated anti-Ahmadi movement, majority of Shiites in Pakistan acted as insensitive spectators of Ahmadi persecution. For most Shiites, anti-Ahmadiyya movement by Sunnis was nothing more than an intra-Sunni feud.

It’s not only Sunni Deobandi, Ahle Hadith and Barelvi clerics who were full of hate speech against Ahmadis, several enlightened Sunni scholars too were not much different. It was a personality no less than the philosopher of Pakistan Allama Muhammad Iqbal who had for the first time demanded of the (then British) government to declare Ahmadis as non-Muslim minority.

The anti-Ahmadi legislation turned out to be a major step by the Pakistani State (after the induction of the Objectives Resolution) towards religious intolerance, sectarian violence and Takfiri terrorism. General Mohammed Zia Ul Haq went a step further and enacted notorious Ordinance XX restricting Ahmadis from labeling themselves as Muslims or practising Islamic rituals and traditions.

The anti-Ahamdi legislation encouraged politicians to further exploit Islam for politically expediency. It emboldened Sunni clerics as they tightened their hold on Pakistani society. It enabled Saudi Arabia to further promote its agenda of converting Pakistani into a Salafi-Deobandi republic. Indeed the precedent set by the second amendment gave the mullahs the audacity to intimidate the state into doing their bidding. It made it alright for the government, army, judiciary and politicians to use religion for political purpose. It resulted into further discriminatory laws. The controversial blasphemy laws (1986), the Hudood Ordinance (1979), the anti-Ahmadiyya Ordinance XX (1984) were natural results of the second amendment.

Anti-Ahmadi law is an insult to the secular vision of Quaid-e-Azam Muhammad Ali Jinnah. Jinnah had clearly warned that “Religion should not be allowed to come into politics…religion is merely a matter between man and God” in his address to the Central Legislative Assembly in February 1935. On the eve of Pakistan’s creation, on the August 11, 1947, he had again reiterated his wisdom through the message that “Hindus will cease to be Hindus and Muslims will cease to be Muslims..in the political sense”. (Source)

We, therefore, demand that the anti-Ahamdi laws and all other discriminatory laws be repealed as early as possible and Takfiri Mullahs, bureaucrats, generals, judges and politicians be thrown out of Pakistani society.

Just who is not a kafir? – by Amir Mir