Home  »  Newspaper Articles   »   ‘Systematic Shia extermination in Pakistan is a genocide’ : An interview with Dr. Taqi

Elements of Pakistani media are literally embedded with the jihadists for their Afghan and Kashmir ventures and have underreported or misreported the Shia genocide issue. In fact, those killed are never identified as Shia

‘The Pakistani anchors have done hundreds of thousands of hours coverage of war in Afghanistan, drone attacks in FATA, Chief Justice’s war against the PPP but have devoted not more than 10 or 20 hours in total covering the plight of Pakistani Shia,’ says Dr Taqi.

Dr Mohammad Taqi is medical doctor by profession. He grew up in Peshawar, currently living in Gainesville, Florida. He has a lifelong association with the progressive movement in Khyber-Pakhtunkhwa. He writes a weekly column for the Daily Times (Lahore) and contributes to Viewpoint as well.

In an interview with Viewpoint, he discusses the attacks on Shia Muslims in Pakistan. Read on:

Senator Faisal Raza Abidi recently in ARY’s talk show, Agar [If], claimed that 129000 Shia have been killed in Pakistan? Do you think this is a credible figure? Or do we have any idea how many Shias have been killed , say, since the 1980s, in sectarian attacks?

I disagree with Senator Faisal Raza Abidi. While there is no accurate data on the exact number of the Shia killed in Pakistan since 1985, when the anti-Shia terrorist outfit Sipah-e-Sahaba was formed, the number is closer to 20,000.

Unfortunately, various human rights groups have been derelict in chronicling the Shia death toll. There’s even worse record keeping in the case of those who were injured, maimed , the ones who lost livelihood and those displaced internally as well as externally. Shia are single largest demographic in those who have been killed or persecuted based solely on their faith, in Pakistan.

In a recent column for the Daily Times, you termed the Shia killings as a genocide. Don’t you think genocide is an extreme explanation for what many may consider isolated Shia killings?

No. Genocide is the term that best describes the systematic extermination of the Shia taking place in Pakistan. Contrary to popular belief it is not the number of people killed but the intent of the killers to wipe out a social collectivity or force them into conversion or concealment of their faith that makes such campaign of terror a genocide. I have drawn upon works of Raphael Lemkin and Professors John Thomson and Gail Quets as well as the UN Convention on the Prevention and Punishment of the Crime of Genocide to emphasize that one person has to die for the crime to be called genocide. The cut off numbers used like 8000 or such are arbitrary and denote a certain inhuman twist to their use. Why would one want to wait for the 8000th person to die till one modifies or applies a definition. And clearly the UN Convention also speaks of prevention of the crime. Moreover, a state does not have actually send out troops to exterminate people for its crime to be considered a genocide. There is tremendous overlap between the jihadists on Pakistani state’s payroll for decades and the genocidaires killing the Shia and for all practical purposes they are the same people. That is collusion of elements of state with their non-state proxies. Also, the UN charter emphasizes the responsibility of a state in preventing genocide and holds it responsible if it fails to do so.

What do you say about the role of media regarding Shia killings?

Pakistani media have been shoving the issue under the rug or worse spinning it as some sort of outside conspiracy/ foreign hand theory. Elements of Pakistani media are literally embedded with the jihadists for their Afghan and Kashmir ventures and have underreported or misreported the Shia genocide issue. In fact, those killed are never identified as Shia. In the name of so-called unity the diversity is curbed and victims are not identified and the crime not named. The Pakistani anchors have done hundreds of thousands of hours coverage of war in Afghanistan, drone attacks in FATA, Chief Justice’s war against the PPP but have devoted not more than 10 or 20 hours in total covering the plight of Pakistani Shia. An occasional exception is there like Munizae Jahangir but consistent and broad coverage hasn’t been there. Like frogs croaking in chorus the anchors go hoarse over Chief Justice’s one suo motu action over say a politician slapping someone but thousands of deaths haven’t made the same champions of humanity budge.

International media and human rights groups have been silent or under reporting. The Human Rights Watch (HRW) and Amnesty International did not even issue customary condemnation after major incidents like Babusar massacre. In many cases they claim that Shia community doesn’t come forth with information but when furnished with information they did little to highlight the issue. Shia Hazara killings in Quetta and Shia Pashtuns under siege/assault in Kurram are a case in point.

Shia community once attempted to build Sipah-e-Muhammad. But it was disbanded. But if this violence goes on, don’t you think Shias will be forced to resist guns in hands?

An old Persian adage goes tang aamad, ba jang aamad – when pushed to wall any one will fight. There’s a conscious effort within Shia community to not respond with violent means. I personally think that non-violent protests and using their voting clout are some of the tools available that should be used. But there can’t be any guarantee that the Shia would continue to offer the other cheek, especially where critical mass exists for retaliating.

How would you evaluate the role of so-called secular parties like the PPP, the ANP and nationalists, or the left grouplets for that matter. It seems nobody is raising voice for the Shias?

The secular parties are conspicuous by their absence in raising voice against Shia genocide. The PPP and the ANP are a major disappointment but leftist groupings are in the same league. No coherent and cogent analysis of the situation has been put forth and their key leaders are derelict in raising the issue. PPP’s Senator Faisal Raza Abidi, MNAs Nadeem Afzal Chan and Farahnaz Ispahani and the ANP MNA Bushra Gohar are exceptions and should be considered outliers who would be dropped like a hot potato if what they say it backfires. Remember, Salmaan Taseer was all but disowned by the PPP. Party platform has not been used by any party except the MQM and now PTI to raise the issue of Shia killings.

What about the judicial system and police system? Don’t you think they are also responsible?

The police have to be commended for tremendous sacrifice in preventing what could have been scores of more tragedies. They do their part with every Shia procession and many have died in the line of duty. Police also apprehended scores of SSP/LeJ terrorists who were released by either the judicial system or got out of jail after a green signal from the intelligence agencies. A hyperactive judiciary that is offended by and took suo motu notice of Atiqa Odho’s two bottles of wine did not care to take note of the river of Shia blood. On the level of system, the superior judiciary’s preoccupation with high profile political cases — handpicked or media/politicians-fed— has had a horrible impact on the judicial system. Backlog of cases is monumental in subordinate judiciary, and it surely includes criminal cases against terrorists. Also, there’s zero input from the Chief Justice of Pakistan on improving the criminal justice system where terrorists cannot exploit the system lacunae and go scot-free.

It seems sections of Taliban [Bad Taliban] are no more favoured by military. But anti-Shia organisations are free to operate. What explains this policy?

International (read US) pressure on Pakistan is immense to stop stoking the fire in Afghanistan. No such pressure has been applied about what the same jihadis do inside Pakistan. Also, the anti-India jihadist outfits remain fully functional and overlap or collaborate with the anti-Shia groups. There’s no indication that Pakistani state is changing course vis-a-vis such groups or reversing its policy of using proxies against India. Overall the Pakistani state now favors a Wahabi-Salafi Islamic identity as against a relatively pluralist Islamic identity that the country’s Shia founder Mr. Jinnah and his several Shia colleagues contemplated.

What is to be done?

Recognize and clearly define that a problem exists that puts about 20% of Pakistani population at peril. Secular parties like the PPP and the ANP have the responsibility to frame the narrative. Domestic and international pressure works. Malakand operation came about after there was domestic and international outrage. It might not have been the ideal success story but still was better than total inaction. Must emphasize that while Gen Kayani’s talk about extremism and terrorism being twin problems should be welcomed, it should be elaborated as well that Punjabi Taliban a la LeJ/SSP, TTP, AQ and groups like Baloch Jundullah are joined at the hip. Any policy that fails to acknowledge the overlap between these groups is bound to fail. Systematic dismantling of the jihadist infrastructure can only happen if at the state level the Pakistani politicians and army both acknowledge that the Wahabi-Salafi jihadist appetite doesn’t end when the last Shia has been killed. After finishing off the Shia the Hanafi-Barelvi are next in line and so on.

International human rights groups and media have a responsibility to bear witness to this Shia genocide in an honest and timely manner. Their voices are heard in world capitals and can translate into some action. The Shia community must organize across Pakistan in a secular and nonviolent manner and bring forth indigenous leaders and advocates. They have a tremendous vote bank that can leverage a lot of clout, especially when elections in Pakistan are around the corner. 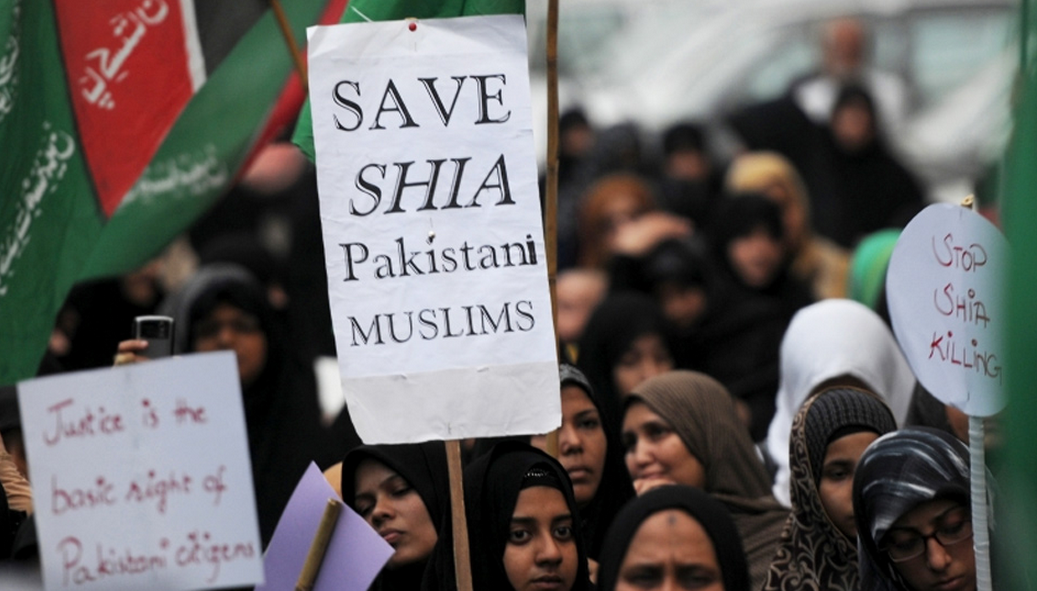 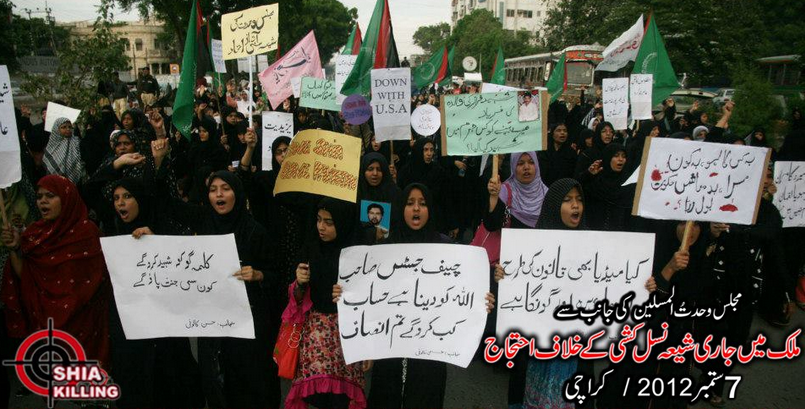