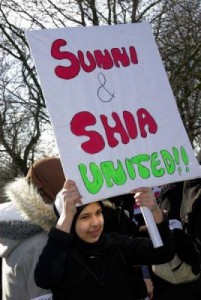 Because personal experiences count and these personal stories help reveal the fabric of society it is worthwhile to share my story of being a child whose childhood was free of prejudices and who was grown in Shias, Sunnis, Ahmadis, Hindus, Christians, Punjabis, Pustoons, Sindhis, Muhajirs and Balochis without even knowing that all these identities exist and that these identities are cause of so much rift and friction in the society.

I had no clue because my elders had not taught me to be prejudiced and never differentiated people in their circle based on cast or creed, belief or background. So what I learned was respect for diversity; I used to go to Jafri Sahab’s home with my father and siblings at Ashoora to watch ‘Taazias’ and ‘Matam’ , as the main procession in the city used to pass in front of his home. It was normal for woman of my household to go to Al-e-Hassan’s home during Ashoora Majalis as a token of respect and I could still remember those events which I have attended along with ladies. Until I went to attend university, I used to watch ‘Shaam-e-Ghareeban’ on PTV notably Allama Talib Johri and we were never told anything which even had a clue to humiliate Shias. It was common for Sunnis to cook meal such as ‘Haleem’ on Muharram and create ‘Sabeels’,  we used to play beside a ‘Imam bargah’ and mostly pray ‘Maghrib’ prayers there while no one was asking who we were and no one cared on what style we follow.  My father used to go to Syed Sahab every year for ‘Koondey’ and his son was my best friend, we learned to ride bicycle together and he used to give me lift on his cycle when we were returning from school, we never discussed his being Shia and my being Sunni, we never thought about it, as we were never taught about it.

So if you think that every child in Pakistan had grown in a prejudiced hateful environment, it is wrong, it is completely wrong. We were not like that; it is true that rifts were always there, there always were disputes as there always were people who got benefited from such disputes (which is the case till today), but there was a large segment of society which kept itself away from such prejudices, mostly common people were far far away from such distinctions and they used to live together peacefully as one people.
These distinctions were exploited by the elite whenever they need and especially in Zia era racial and lingual differences and religious sectarianism was used as a tool to keep focus of people away from the real challenges and to keep democratic movements weak, fragile and disintegrated and hence to stop momentum of a real people’s movement against the regime.

Generation which grew up in Zia era and later came up with a different psychology, that era was the era of censor and violence, people were forced to be silent, drug and arms were introduced heavily and society was disintegrated to benefit the rulers, and so the society was transformed. We were transformed in a society which could support Jihad in Afghanistan against USSR and communism. Along with the fact that Shia majority areas had the oil reserves and a Shia majority Iran was considered a threat to other states or ruling classes in Gulf; and so this rift was stretched to almost all Muslim countries including Pakistan. Heavy money poured in to support ‘Madrsahs ‘and other outfits and parties for both sides. In this environment a different generation was raised.

But whatever that generation may think, they should be reminded that things were not like this by default, they need to seek beyond their experiences to understand what happened and they must realize that situation can be changed. If situation can be altered for the worst, it can also be developed for good and common benefit. We have seen good times, and those times can be brought back if we stand together against the forces of darkness and biases.