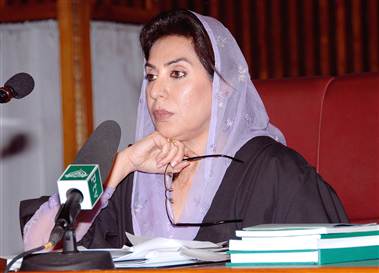 Concluding remarks by National Assembly Speaker Dr Fehmida Mirza in the matter of Prime Minister Yousaf Raza Gilani under Clause 2 of the Article 63 of the constitution .

It is unfortunate the biggest opposition party in assembly went against the speaker of house in apex court , if they were so convinced that that speaker ruling  was in bad faith , then they should have launch a no-confidence motion against speaker .

The supreme court of Pakistan set the wrong precedent of accepting a petition against ruling of speaker national assembly which is clearly a violation of constitution and one can now clearly see its consequence . Recently Punjab assembly demanded federation to form a commission to make constitution amendment regarding southern Punjab province . here is the text of the resolution presented by provincial law minister , Rana Sanullah .

(4) A Bill to amend the Constitution which would have the effect of altering the limits of a Province shall not be presented to the President for assent unless it has been passed by the Provincial Assembly of that Province by the votes of not less than two-thirds of its total membership.

The status of Bahawalpur Province on the basis of administrative, geographical, historical, constitutional and political grounds and other Resolution demanding from the federal government to establish Janoobi Punjab province and for giving practical shape to the creation of new province and also setting up a national commission that shall immediately decide all important issues were unanimously passed by the House.

The Punjab ruling party resolution explicitly demands federation to form a commission on matter of new provinces . On request of Punjab assembly  Speaker National  ask parliamentary parties to nominate members for province commission .  What happened after that is  even unbelievable by the usual standard . Speaker of Punjab assembly threatened  to file  writ petition against speaker of National assembly in apex court .

Senator Rafique Rajwana, one of PML-N’s three members in the commission said ,  PML-N could also include a request for two more provinces in its plea to the court as well.   What PML N is demanding is not only unconstitutional but unimaginable , they want Supreme court to go ahead with altering  boundaries of other provinces , instead of moving a resolution in respective provincial assemblies .

Body on provinces challenged in SC

LAHORE – A petition was filed in the Supreme Court Lahore Registry on Thursday, challenging the federal commission constituted for the creation of new provinces.

The Watan Party through its chairman Barrister Zafarullah Khan filed the petition, saying that the formation of body was discriminatory as it didn’t represent the parties concerned. The application was for specific purpose and specific province, the petitioner added.

He argued new provinces could be created with the consent of provincial assemblies concerned for administrative purposes, if required. He added the commission on provinces formed by some parliamentarians was against the articles 239 (4) and 4, 5 and 8 of the constitution.

He questioned the politicians’ claims of serving for the people, saying the issue was not consulted with the quarters concerned.

“Pakistan stands before us today as a mirror, reflecting our own politician’s political and ethical imperfections” said the petitioner, adding that the creation of new provinces was not based on administrative purposes.

He made an appeal to the court to set aside the formation of the federal commission on formation of new provinces.

On June 27, a three-member had heard the case and given an opportunity to President Asif Ali Zardari to disassociate his office from political activities in directions of court ordered on May 12, 2011.

The petition was moved by Muhammad Azhar Siddique through AK Dogar against the president for holding political office and seeking contempt proceedings against the PPP co-chairman under article 204 of constitution. The petitioner said the president had neither disassociated himself from political office at the ‘earliest possible’ as expected by the court in its decision on president’s dual office nor obeyed its directives on using the presidency for running party affairs. The larger bench will resume hearing on September 5.

As I was writing this piece , supreme court came up with another remarkable order , SC in its contempt of court law detail judgement has order speaker national assembly to  take action  against parliamentarian who dare to discuss conduct of judge in parliament undermining the fact debate parliamentary debates are protected under parliamentary privileges .