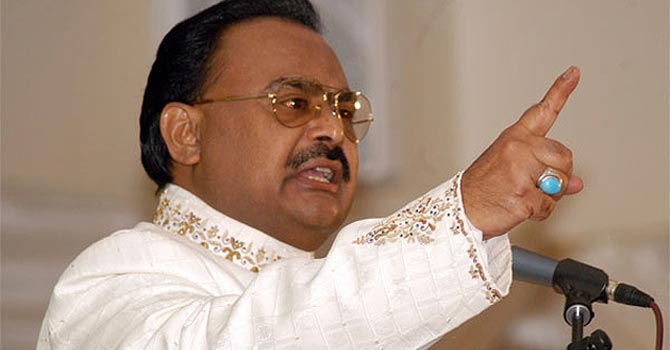 In Pakistan's entire history, no other mainstream leader has taken more bold and clear stance on Shia genocide than MQM's leader Altaf Hussain

Karachi: In an impassioned speech that included critiques of clerics and the judiciary, Muttahida Qaumi Movement (MQM) chief Altaf Hussain asked the Pakistan Army, Inter-Services Intelligence and other agencies to shut up shop if they could not “protect people”.

“Leave them,” Hussain said before turning to his audience, “You have a right to defend yourself by any means.”

Altaf’s speech at an interfaith conference organised by his party in Karachi came after a series of statements by him and other party leaders on the increase in the number of attacks on Shias throughout Pakistan. Several clerics from Karachi as well as other cities of Pakistan such as Quetta, Lahore and Chakwal, were in attendance.

He said his statements had been criticised because he had only supported Shias. “I have also condemned attacks on Sunni clerics. But do tell me of an event where Sunnis have been taken off buses, identified and killed by Shias – I do not believe this has happened.”

Hussain highlighted the alarming trend of uploading footage of such attacks online. In these videos you can clearly hear chants calling Shias non-believers. “I would like to ask the ulema, where is the Inter-Services Intelligence, the Military Intelligence, the Intelligence Bureau, Frontier Constabulary, Rangers, paramilitary forces and law enforcement agencies?” asked Altaf. “If you cannot protect citizens then the country will break into separate parts. Christians will ask for a separate state, then Shias, so will the Barelvis and the Ahle Hadith. What joke is this? Where is the government? Maintaining peace and establishing law and order is the responsibility of the institutions on which billions of rupees and 80% of the budget is spent.”

By making this speech and a number of statements condemning the attacks, Altaf and the MQM have emerged as perhaps the only political entities to have taken such a hard-hitting stance against militancy. This helps the MQM not only strengthen its public claim of being a liberal, secular political party, but will also appeal to voters in Karachi and in areas where there has been little to no political courage shown on the issue. The MQM has a vote bank among members of minority faiths as well as the Shia community in Karachi.

This speech could also strengthen the MQM’s appeal abroad. While Pakistan and its political leadership is often criticised for not doing anything to deter militant groups and attacks on religious groups and minorities, the MQM will stand out. Part of Altaf’s speech was made in English, which certainly helps underscore this point.

Altaf also hit out at the clerics assembled at the event, asking if they would ever practice what they preached.

He did not spare the judiciary either, questioning the low conviction rate. “Murderers are arrested, then released and then they say the judiciary is ‘independent’,” Altaf said. “I ask Pakistan’s people to also hold judges accountable … in the same way that they hold their leaders. Ask them why they freed well-known killers.”

Altaf asked clerics to form a committee on interfaith harmony. It features 13 of the clerics who attended the event. They passed a declaration condemning the murders of innocent people of all sects, the killings in Gilgit Baltistan, Quetta, Parachinar and Karachi, the suicide bombings at shrines and the targeted assassinations of clerics. They also termed members of minority faiths as Pakistanis and condemned efforts to destabilise Pakistan. (Source:The Express Tribune, September 2nd, 2012.)

He termed the gruesome bloodshed a wanton act of slaying the humanity itself.

Addressing a conference organised to promote harmony between different sects of Islam, the MQM chief said that enemies of the country will take advantage by creating rift between Sunnis and Shias.

Assailing the judicial system, he said that acquitting murderers over lack of evidence can not be justified for having ‘free judiciary’ in the country.

Hussain said that the innocent people belonging to the Hazara community in Balochistan were being subjected to genocide, and targeted for their association with Shia school of thought.

“MQM leaders and religious scholars believing in sectarian harmony and unity among Muslims had called for stopping these acts of savagery, which could not be done. Seven more innocent people were gunned down in Quetta after their identities were verified,” he condemned.

Hussain said that every peace-loving citizen of the country besides members of the Hazara community is questioning the existence of government, and law-enforcing in stopping criminals prowling freely to target the specific community.

The MQM chief extended sympathies to the grieving families who lost their loved ones and expressed unity and solidarity with them. (Source: Dawn)

Muttahida Qaumi Movement (MQM) leader Raza Haroon has linked the recent spate of murders of party activists to party chief Altaf Hussain’s recent statement opposing sectarianism and claims that activists are being killed because of the stance the party has taken. Haroon, who is a member of the party’s Coordination Committee and the Sindh minister for information technology, addressed a press conference on Friday afternoon at the MQM’s Khursheed Memorial Secretariat.

“We had a consultation session with non-governmental organisations on Thursday,” he said, responding to a question on whether the party, as a partner in the federal and provincial government, had any ideas on how to reform the institutional issues when it came to the protection of minorities and the blasphemy law. “Several suggestions were proposed including for a bill against the harassment of minorities. As far as Rimsha’s case is concerned, we looked at other high-profile cases as well and looked at ideas. What the idea is that why can we just not adopt the Quaid-e-Azam’s speech of August 11? We have not prepared a law as yet, but when we do, it will be presented in the National Assembly as well as the Sindh Assembly,” Haroon said.

In his speech, Haroon highlighted the murders of Shias throughout Pakistan. “They are being taken off buses and what is shameful is that they are killed after being identified,” he said. “On the other hand, the injustices against members of minority faiths, who are Pakistanis, have spread a sense of insecurity among them. Many Hindu families have left for India and an 11-year-old girl called Rimsha has been arrested near Islamabad and Christian families have been forced to leave the area,” Haroon said, alluding to the case of a young girl being arrested on alleged charges of blasphemy. “This has not just ruined Pakistan’s image abroad but has also made us bow our heads in shame.”
The minister said that MQM workers were being killed for their efforts in trying to deter sectarianism and working to strengthen Pakistan.

He recounted that four MQM workers had been killed since August 28 and several had been injured in attacks in different areas. The MQM leader questioned how these murders were taking place when there were thousands of police, Rangers and law enforcement agency personnel deputed on the roads, and called on the heads of these institutions to fulfil their responsibilities.

“The superficial and half-hearted approach of the relevant authorities in the federal and provincial governments makes it seem like they do not consider it their primary duty to protect the life and property of the public,” said Haroon. (Source: ET)